Fluoride & Water Treatment: History and Role in the Great Debate 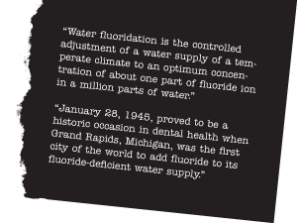 Summary: While some point-of-use/point-of-entry (POU/POE) equipment can effectively remove fluoride—reverse osmosis, distillation and some filtration systems (see www.nsf.org/Certified/DWTU/), the larger debate over fluoride as a drinking water additive remains a volatile one. The following article represents the opinion of the author and doesn’t necessarily reflect that of the publisher of WC&P.

Over 55 years ago Grand Rapids, Mich., was the first city in the world to treat a municipal water supply with fluoride.

As innocuous as it sounds today, this one act created a debate that still rages. It’s been called everything from a communist plot by John Birch Society members to the greatest single health benefit ever achieved by the American Dental Association (ADA). Whatever your position on this issue, you wind up squarely in another great debate over water quality.

Today, an estimated 144 million Americans drink water with fluoride added to it, pouring over 39,000 tons of fluoride into the environment. Not before or since has water supplied to the general population been chemically altered for a debated health effect based on debated science and the captive public, agreeing or not, been forced to swallow it.

“What about chlorine?” you might say. Chlorine has been added to many municipal water supplies since the early 1900s and today the entire class of chemicals (organo-chlorines) is debated regarding their environmental impact (see “Chlorine: History and Role in the Great Debate for Water Disinfection,” WC&P, June 2000). No one can debate the need, social impact and health benefit of disinfecting drinking water. The method of disinfection can be questioned—but not the need. Fluoride as treatment of water has piggy-backed it’s way into municipal water supplies with little regard to the environmental impact. New evidence shows there may be even greater potential health threats.

It’s elemental
Fluorine is a chemical element or atom and does not exist in nature in a free and unmixed state as it readily unites with other elements to form fluoride compounds. The 13th most abundant element on earth, fluorides are present as inorganic compounds throughout the Earth’s surface. Some organic fluorides occur naturally as well. Small amounts of fluorides are found in almost all foods and water supplies (see Figure 1). Fluoride is considered by some—the ADA, American Medical Association, Centers for Disease Control and World Health Organization included—to be an essential element in humans that aids in development and maintenance of strong bones, teeth and even growth.
At the 138th meeting of the American Association for the Advancement of Science, Klaus Schwartz, M.D., reported in 1972 that “recent results of systemic studies to identify new essential trace elements for mammals is the discovery that fluorine is an essential trace element.” Adds Dr. Richard Foulkes, “Fluoride is not an essential element so far as human nutrition is concerned. It is not recognized as such by the U.S. Food and Drug Administration (FDA) and has never been demonstrated as essential by animal experimentation.” And so begins the true element of a “great debate” whereby one group looks at research and sees one thing. The other side, looking at the same research, sees the opposite.

History of fluoridation
In 1916, Dr. Frederick McCay reported on a study of mottled teeth—mottled describes a discoloration and pitting of tooth enamel—with this observation: “Some individuals of the population that exhibited teeth with stains and pitting, exhibited less tooth decay.” He advanced the theory that this condition may be due to some substance in the water.

In the 1930s, it was discovered that the substance in the water was fluoride. This led to analyses of fluoride in drinking water throughout the United States. A series of studies by the U.S. Public Health Service in 1938 found a direct correlation between the concentration of fluoride in water and the amount of tooth decay in children who drank the water. An optimum level was determined to be 1 part per million (ppm). Two ppm-plus was known to contribute to dental fluorosis—a mottling of the teeth—and the potentially more dangerous skeletal fluorosis—a concentration of fluoride in the bones making them porous and brittle. 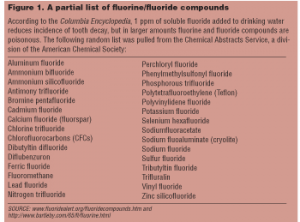 The first ever study conducted on the effectiveness of fluoridation was completed in 1956. In the final Public Health Report on the Grand Rapids study, Drs. F.A. Arnold and H.T. Dean stated: “In children born since fluoridation was put into effect, the caries (cavities) rate for permanent teeth was reduced on the average by about 60%.” More recent studies by the U.S. Public Health Service looked at dental records of over 39,000 schoolchildren, ages 5-to-17, from 84 areas around the United States. These showed that the number of decayed, missing and filled teeth per child was virtually the same in fluoridated and non-fluoridated areas.

Fluoride vs. fluoridation
The importance of dental cavities as a national health concern or fluorides effectiveness at preventing them aside, there are issues of some concern. The most common “naturally occurring” fluoride compound is calcium fluoride. Many fluoride proponents would have you believe: “Natural fluorides have been present in the water supply of millions of people for generations and fluoridation only adds an identical fluoride ion to the same level in community water supplies as the concentration in the naturally fluoridated waters.” Nothing could be further from the truth. Originally and today, sodium fluoride variations—predominantly silicofluorate, fluorisilicic acid and sodium silicofluoride 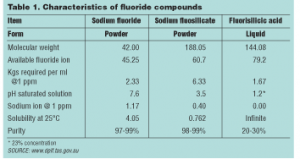 (see Table 1)—are the chemical of choice for the fluoridation of water supplies in the United States. All are un-tested, none are FDA approved and they are by-products of industrial processes. Such fluoride compounds are wastes from the production of aluminum, phosphate fertilizer, steel, uranium, beryllium, bricks, cement, pottery, enamel and plastics. This begs the question—who makes a profit selling fluoride to our municipalities that would otherwise be very costly to dispose? “Silicofluo-rides are largely untested,” said Dartmouth Professor Emeritus Roger Masters who points out that over 90 percent of America’s fluoridated drinking water supplies are treated with silicofluorides. “Virtually all research on fluoridation safety has focused on sodium fluoride. Even though the studies in the 1930s showed important biological differences between the chemicals.”

Silicofluorides and lead intake
New information from recent studies found a correlation between use of silicofluorides in water fluoridation and lead uptake. In analyzing over 280,000 Massachusetts children, investigators found levels of lead in the children’s blood significantly higher in communities using the silicofluorides, fluorisilicic acid and sodium silicofluoride than in towns where water is treated with sodium fluoride or not fluoridated at all. The study by Masters was published in the International Journal of Environmental Studies’ September 1999 issue and showed a corresponding increase in attention deficit disorder/attention deficit-hypersensitivity disorder (ADD/ADHD) and other learning and behavioral problems.

In light of such new data regarding use of the more toxic silicofluoride, it may be time to take a fresh look at fluoridation. The 1-ppm optimum level established for fluoridation as well as arbitrary raising of the maximum allowable level from 2-to-4 ppm fail to consider total exposure to fluorides from food and soft drinks processed with fluoridated water to foods grown with fertilizers containing fluoride, not to mention toothpaste and mouthwash.

In February 2000, an independent review of the 1993-94 California Oral Health Needs Assessment—basis for the state’s 1995 order to fluoridate all community supplies serving over 10,000 people—was delivered to the Escondido City Council. The review’s author refuted the state study, saying it failed to take into account the mentioned alternative sources of fluoride for children, according to the San Diego Union-Tribune. Nearby San Diego defied a citizen initiative and approved fluoridation of water supplies delivered by the city little more than two months later due to the state mandate.

Conclusion
My childhood home of Grand Rapids, Mich., has an extremely higher than average ADD ratio in the student population. In tribute to the 50th anniversary celebration of fluoridation in 1995, an ADA committee proposed a monument to the success of fluoridation be constructed on a natural formation of rocks in the Grand River that runs through Grand Rapids. Ironically, that’s where most of the fluoride ends up. Most of the water coming into the home never contacts anyone’s teeth. Flushing the toilet is a major water user in any home and the porcelain enamel in the bowl is as hard as it gets! The question of the environmental impact of more than 39,000 tons of fluoride dumped into U.S. waterways each year is one that needs to be explored.

Irrespective of the above debate—which may never be settled to either side’s satisfaction—POU/POE equipment removes fluoride. The residential dealer doesn’t need to play this issue up. The concerns are there. They simply need to state their products’ capability. There’s no need to editorialize in the field on the topic because it’s unnecessary to take a position to win customers, as is illustrated by the following scenario:

Dealer—”If you’re concerned about fluoride in your water, this removes it.”
Customer—”Why? Should I be concerned?”
Dealer—”Well, there is a debate that the form of fluoride commonly used to fluoridate municipal supplies may create more problems than it solves. You can do a simple search on the topic on the Internet if you’d like and you’ll find a host of resources on both sides. Regardless, though, use of this equipment makes the matter moot.”
Customer—”But I do think we should have fluoride in our water.”
Dealer—”Then you and your family can use mouthwash or toothpaste with fluoride, which should offer you adequate protection for dental care.”

About the author
William S. “Bill” Siegmund is founder and president of Pure Water Works Inc., an independent dealership in Traverse City and Gaylord, Mich. Siegmund is a member of the Water Quality Association, American Water Works Association and WC&P Technical Review Committee. He holds the WQA’s Certified Water Specialist-Level 5 designation and has served on a number of its technical committees. Siegmund can be reached at (231) 941-7873, (231) 941-7874 (fax) or email: [email protected]