Where Are All the ‘Water Bucks?’

These days we hear a lot about the general size and significance of the water business—in the United States and worldwide. Scholarly studies and reviews abound—and new ones seem to come out almost every day—citing the extent of our problem, the level of new expenditures required, and nonchalantly throwing around figures of hundreds of billions of dollars. Water often is compared in terms of size to the chemicals and automotive industries. It’s been described as the “oil” of the 21st century, the most likely source of future international conflict, and so on. Everyone seems to be writing a book about the coming water crisis. Recent studies—given big play in the American popular press—have estimated that the United States needs to spend over $300 billion in the course of the next 20 years just to maintain our infrastructure, let alone keep up with ongoing population and economic growth.

Well, not necessarily—at least not yet. As we have pointed out before in this column, few water companies have been raging investment successes during the past few years, although there’s the strong likelihood that such winners will emerge in the future. Before we can identify which existing or emerging companies are likely to be the stronger players of the future, we need to analyze a couple of obvious questions: 1) to what sorts of companies are all these water dollars being directed today, and 2) where will these hundreds of billions of water dollars be spent in the future? This article attempts to briefly answer this question—“where are all these water bucks?”

There aren’t simple answers to these questions; indeed, if one adds up the revenues of the representative companies that have been covered here in this column (or in any other stock market reviews) one has a hard time getting anywhere near the current estimates of overall market size. Even in much more detailed water stock reviews, one typically finds about 25 or 30 companies that comprise the key players in the water industry. The total revenues of the group of companies listed in the table below add up to only about $5 billion. In the latest Environmental Business Journal, all water-related companies, including publicly-traded water utilities, show total revenues of about $8 billion.

Of course, the USFilters, Nalcos and other U.S. companies that have been gobbled up by French and British interests (see “Drinking Water Dollars: The Foreign Invasion Continues Apace,” WC&P, November 1999) could probably add close to another $10 billion, but all of this still leaves us quite short of the $80-to-100 billion at which the U.S. water market is often estimated. So, where are the rest of the dollars?

The short answer is that most of these other dollars (however many there actually are) either: 1) reside within much larger and more diversified industrial organizations that aren’t really viewed of as “water companies,” or 2) are owned by a few large and many more small and privately-owned firms that don’t have high profiles or visibility within the industry.

There’s a substantial amount of water-related revenue running through more diversified publicly-traded companies—firms that may be major players in the water industry, but for whom water is only one part of a larger and usually much more diverse set of business lines. Below is a brief summary of some of the more prominent players in this category. In our next column, we’ll review leading private companies.

Ameron International
This is a $500 million California-based manufacturer of engineered systems for the petrochemical, industrial and construction markets. The company sells high-performance composite fiberglass pipe, tubings, screens and concrete and steel piping into the water and water industry, and is a key player in the infrastructure sector of the market—often referred to “pipes, pumps and valves.”

Ametek
Ametek is a billion-dollar manufacturer of electric motors and electronic monitoring and measurement devices, as well as also being a supplier to the broader water infrastructure marketplace. The firm is based in eastern Pennsylvania, and has recently shown a consistently increasing stock price. Purchased by Culligan in 1997, it later became part of USFilter and then Vivendi with additional mergers.

Clarcor
This is a company that sometimes shows up in reviews of the water industry, as one of its main operating divisions is referred to as its industrial and environmental filtration products group. Liquid filtration systems are sold to a wide variety of industrial and process applications. The company also manufactures and distributes air filtration products. Based in Rockford, Ill., the firm has annual revenues of over $600 million and a recent market capitalization of about $500 million.

Clorox
A well-known household name in the United States, it’s particularly renowned for its bleach and home cleaning products. Clorox, traded on the New York Stock Exchange, has sales of greater than $4 billion and generates cash of almost $1 billion, leading to a market value of well over $7 billion—one of the richer valuations in the industry. One of the firm’s well-known brand names is the Brita line of point-of-use water filtration devices—similar to the PUR product line recently acquired by Procter & Gamble (see below).

General Electric
One of the oldest and best-known corporate names in the United States, GE recently purchased a major Canadian water treatment and conditioning company named Glegg; this was widely interpreted as both a move to support GE’s large internal power systems division, as well as an indication of stand-alone interest in the future potential of the water business. GE stock hardly represents a means of investing in the water industry, but it may nevertheless be a major industry player in the future.

Hercules
Another historical and well-known U.S. corporate name, Hercules was originally a manufacturer of explosives and various specialty chemicals. With its purchase of BetzDearborn several years ago, it also became one of the largest domestic producers of water treatment chemicals. Even as chemical usage for water treatment begins to decline, this is still a very large market, and Hercules will be a major player—along with Nalco (now owned by Suez Lyonnaise) and Calgon Carbon Corp. (still an independent public company).

ITT Industries
Perhaps the prototype conglomerate of the 1960s, ITT has quietly built a major position in the water industry over the past several years. Although the ITT name is rarely heard, several of its operating units are well known within the water and wastewater treatment equipment business. For example, the Goulds pumps division is one of the largest pump manufacturers in the world. The company has also moved aggressively into the business of large-scale wastewater treatment equipment with the acquisition of firms like Flygt and Sanitaire.

Lindsay Manufacturing
A manufacturer and distributor of various types of large-scale irrigation systems for agriculture, the firm is based in the Midwest, has sales of about $130 million, and commands a market cap of almost two times sales. (Valmont Industries is another publicly traded company participating in this arena of the water distribution business).

Millipore
A large player in diversified markets for liquid separation and purification, Millipore sells membrane and other separation technologies widely into pharmaceutical, medical, food, industrial process and environmental applications. The firm is approaching $1 billion in sales, and also commands a high market multiple—of well over two times annual revenues. Millipore is often grouped together with other more specifically water-related companies, but in reality its business is much broader.

Pentair
A major NYSE-traded conglomerate, which holds substantial interests in water equipment, pumps, valves and filtration products—both for industrial markets and home retail markets such as spa equipment and chemicals. Pentair has other unrelated business divisions as well with total revenues approaching $3 billion per year. In recent years, the firm has moved aggressively to build a more substantial position in the water and wastewater treatment equipment business.

Procter & Gamble
Another well-known consumer name in America, P&G acquired one of the major residential water treatment equipment manufacturers—Recovery Engineering—in mid-1999. Recovery was best known for its PUR line of under-sink filtration devices and pour-through filters. Although not particularly profitable at the time of its acquisition, the acquisition of Recovery signals P&G’s intent to build a substantial business in the retail end of the water quality business.

There are also dozens of major privately owned players that own substantial pieces of the overall water pie. In our next column, we will discuss names like the Marmon Group (owners of EcoWater Systems, Alamo, Matt-Son, EcoDyne and others), Aqua-Aerobics, Kinetico and other significant private players.

By the numbers
Now, briefly, back to a quick review of financial performance for those more focused water companies that we do regularly follow in this column. This month, we have organized this table to show different measures of relative valuation for water companies.

As shown, equity valuations are still relatively weak in this industry—a reflection of the generally unimpressive profitability and financial performance that most of these companies have generated. Up-and-comers in the sector lately include Insituform—a company that rehabilitates underground water and wastewater lines—Cuno and Pall, a diversified fluid filtration and separation company. 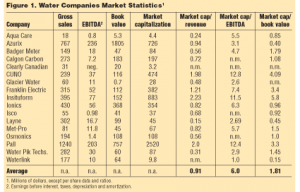 Conclusion
With the kind of future outlined above, and with a strong and robust economy lead by falling interest rates, 2001 will hopefully be a stronger year than 2000 for most of these companies. With continuing dot.com woes, they’ll also be more attractive investments.

About the author
Steve Maxwell is managing director of TechKNOWLEDGEy Strategic Group, a Boulder, Colo.-based management consultant specializing in mergers, acquisitions and strategic planning services to the water and environmental services business. Maxwell is also editor and publisher of The Environmental Benchmarker and Strategist, an industry newsletter covering competitive and financial developments in the broader environmental services industry. In the annual water issue of this publication, a grouping of some 40 water-related companies yield total revenues of under $15 billion. Maxwell can be reached at (303) 442-4800 or email: maxwell@tech-strategy.com.