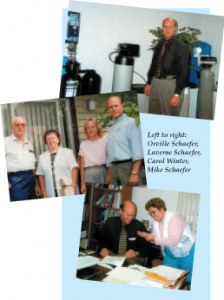 Five years after graduating, Mike began to work again at his parents’ business. The water treatment business soon grew to the point where extra help was needed. Selling the business was completely out of the question for Orville and Laverne Schaefer. After all, Mike’s parents had bought the business from Laverne’s father in 1972. The prevailing, and only, thought was the business would stay within the family. Successful third-generation family businesses are rare nowadays— and that wasn’t lost on Mike. Around the same time, Carol entered the picture with some ideas as well. The decision was made.

“It was always both of our aspirations to certainly run our own companies,” Mike says. “As we came back—Carol with her computer background and myself with the engineering and sales background—it allowed the company to take that next step in growth.” Since they’ve taken over in 1987, he says, the business has more than quadrupled in size.

Family partnership
Mike describes the two-headed ownership as a “positive relationship.” Brother and sister have managed to allow each other to do what they do best without getting in each other’s business. This is helped by the fact that each operates out of a different location. Mike says Carol single-handedly upgraded the company’s computer system for any potential millennium concerns.

Incorporated under Riverside Water Technology, the business is known as Schaefer Water Centers. With four locations in southeast Missouri, Schaefer employs between 45 and 48 people. When Mike’s grandparents owned the company in the early 1950s, it was known as Steffens Sani-Soft, a water and exchange tank business with an emphasis on treating high iron wells in southern Missouri and Illinois.

After Mike’s parents purchased the company, it made the transition into automatic water softeners in the late 1970s. In the ’80s, a second location was added. In the ’90s, the third and fourth locations were built. Mike works out of the Herculaneum, Mo., office, which was built in 1990. Herculaneum is 15 miles south of St. Louis and was the company’s third office.

Herculaneum office
The largest office of the four, Herculaneum attributes 70 percent of its business to the commercial/medical sector and the other 30 percent to residential. One reason, Mike says, is because very little hard water exists in the St. Louis area. The other offices, in contrast, each have a customer base of 70 percent residential and 30 percent commercial.

Schaefer carries Kinetico and Waterpure for residential equipment. On the industrial side, the manufacturers are Hellenbrand and Osmonics. Almost all of Schaefer’s RO equipment is Osmonics as well. “We work hard at developing relationships with our vendors,” Mike says. He adds that Waterpure has been on board since the late ’70s.

Medical services
Customer accounts currently hover around the 10,000 area, he says. Nowhere is that more evident in Schaefer’s fastest growing segment—the medical sector. This happened by no accident. Schaefer applied for and was granted 510K status by the Food and Drug Administration last year for a medical water system for dialysis. “That kind of put us in a smaller club of a dozen or so suppliers in the country that do that,” Mike says.

Schaefer splits its business right down the middle between bordering states Missouri and Illinois. One of the main differences, however, is the plumbing codes for each state. In Missouri, the regulations are lax whereas Illinois has tough standards. Mike credits much of this to Missouri’s Water Quality Association (WQA)—of which he’s a member—which is strong and highly organized and has helped stop certain legislation he terms “unfair.”

Speaking of associations, the Schaefers know how the importance of such groups. After removing himself from the day-to-day operations of the business, Orville has gone on to make significant contributions to both the national WQA and the Illinois Environmental Protection Agency.

From his involvement in the WQA’s Educational Services Committee, Orville was asked to assist in developing a training program for small system operators in Illinois. Orville has just completed developing a training resource guide. The next step would be to set up classes. The fallout will be that any small system operator in Illinois will have to be certified through these programs before receiving a license to conduct business. To this point, Orville has devoted almost two years of his time to the effort.

Back at Schaefer, all site managers are WQA members. In all, 25 to 30 Schaefer employees are certified members. Mike and Carol also attend as many local and national meetings as possible. “You have to make time for those, whether you have it or not,” Mike says.

‘Hire for attitude…’
Mike says the biggest challenge faced by his company is finding and training the right personnel. “What do they say, ‘Hire for attitude, train for skill.’ You would kind of like to shortcut that sometimes and hire for attitude, but I would sure like it if he or she owns a few skills also. In our industry, there’s nobody out there. I can’t call the union hall or this pool of people that are just floating around looking for jobs.”

In many instances, it all comes down to whether or not employees can flourish in an on-the-job training environment, he adds. For many technicians, this often calls for a minimum of two years. Many of Schaefer’s technicians have been at the same job for over 10 years, Mike says.

He likes to talk about 10 percent growth per year. The last two or three years have resulted between 6-9 percent growth. “We’re steady,” he says. “Our rentals pull us through the lean times.” Rentals, new equipment sales, and products and services each account for a third of the company’s revenues.

With Schaefer’s rental base and concentration on well water, Mike regards upcoming state and national regulations on septic tank rules and encroaching water districts with respect to treatment of wells as a possible negative impact in the business’ future. Still, Mike sees a rosy picture in the crystal ball: “We expect over the next two years to have a steady growth. We’re looking at different technologies, and we hope to horizontally market our products in various industries and areas. We’re also looking to expand, and we would not be adverse to seeing another location pop up.”

Conclusion
Whether it’s hiring someone to properly market the company’s products and services, meeting new regulations or working with his sister to better the business, Mike knows the long hours are well worth it. The secret may be in his “customer first” attitude that looks to propel him and the Schaefer name to longevity in the Show Me state.