The impact of such violations is difficult to assess since factor risks are highly variable from one community to another, depending largely on the type of violation (tardy testing or reporting vs. a discrepancy in following water treatment protocols) as well as the number and susceptibility of persons exposed. What is known is that the greatest number of health-based violations occur due to chronic coliform bacteria. Coliform bacteria are commonly present in the environment, but their presence in drinking water suggests that inadequate treatment has taken place. The most recent information estimates that greater than 7 million people become ill and more than 1,000 die each year from disease-causing microbes in drinking water.1

The following is a review of past violations of public water systems throughout the United States. In addition, information is given to stay informed regarding the quality of water supplied by public systems in a specific area.

State and national regs
Under the Safe Drinking Water Act (SDWA), the USEPA is responsible for regulating public water systems serving at least 25 people. Each state is responsible for the supervision of water systems within its borders based on USEPA-set national limits for a variety of contaminants and treatment requirements. Each state is required to send quarterly reports to the USEPA for review and analysis. The quarterly informational reports, comprised of more than 16 million computer records, are then compiled into the Safe Drinking Water Information System (SDWIS), which is then available to the public (see www.epa.gov/OGWDW/sdwisfed/sdwis.htm). This information is fed into the National Contaminant Occurrence Database (NCOD), developed to satisfy statutory requirements set by Congress in the 1996 SDWA amendments. Fifty-six states, commonwealths and territories are required to prepare compliance reports, including American Samoa, Guam and the Northern Mariana Islands. The USEPA also prepares reports for states and Native American tribes that don’t have primary enforcement responsibility for drinking water programs, including Washington, D.C., and water systems located on Native American reservations.

The current primary drinking water standards, known as the National Primary Drinking Water Regulations (NPDWRs), are legally enforceable standards that apply to public water systems subject to inorganic, organic, radionuclide, microbial or other health-affecting contaminants (see “Water Treatment Standards and Methods—Quick Reference Charts for the Dealer,” WC&P, July 2000). These primary standards set maximum contaminant levels (MCLs), which is the maximum permissible level of a contaminant in water delivered to any user of a public water system. The MCL is set as close as is feasible to the level where there are no known or anticipated health effects with help of the best available technology or treatment techniques. Where it’s unfeasible to monitor and ascertain the level of a particular contaminant, the USEPA sets treatment techniques instead of MCLs. The required treatment techniques are designed to prevent known or anticipated health effects. In addition, the USEPA sets maximum contaminant level goals (MCLGs) indicating the level of a contaminant where no known or anticipated adverse effect on human health is noted. MCLGs are non-enforceable public health goals.

Exposing millions
The Environmental Working Group (EWG), an activist environmental/political watchdog organization in Washington, D.C., has collected state reports and provided a national average for data submitted during 1994-1995. Its statistics, while they may differ slightly from those presented by the USEPA, are similar enough to merit inclusion here. During 1994-1995, the EWG reported, more than 10 percent of the nation’s 173,000 public drinking water systems violated health standards for chemical, radiological or microbial contaminants, or filtration and disinfection and water treatment regulations. The 18,542 utilities in noncompliance served compromised drinking water to over 45 million people (see Table 1).

From 1994-95, Delaware was the state with the highest percentage of systems with violations of health standards, followed by South Dakota, Arizona and Idaho. The No. 1 violation was failure to comply with adequate testing and sampling, suggesting the possibility that noncompliance figures are greatly underestimating the true level of contamination. In addition, regulations are only effective at monitoring and enforcing minimum levels of recognized health hazards, where many more unrecognized hazards are thought to exist. Furthermore, health standards are set on the basis of known information of public health effects of single contaminant exposures. It’s likely that system failures result in exposure of consumers to a variety of contaminants with possible synergistic effects.

Because of their ubiquitous nature and non-point source impact, microbes are widespread and a difficult contaminant to control. In addition, disinfection by-products (DBPs) are also widespread due to the addition of disinfecting agents protecting against microbial growth. Chemical agents, i.e., from waste plants or industrial discharges, are largely from point sources and may be easier to control. Where contaminants are naturally present—such as radionuclide contaminants as a result of natural erosion—the problem is generally regional, offering increased awareness and the possibility for application of control measures.

It’s important to note that regulations are only set for recognized hazards that have been associated with human illness. Increased knowledge of harmful agents and better reporting by medical facilities have enabled better identification of environmental hazards; however, new agents are frequently being discovered. The USEPA has committed to regulation of additional environmental hazards as well as conducting research on suspect contaminants. Even with this focused effort, no information is known or formal testing being conducted regarding the effect of combined hazard exposures. Thus, individual contaminants may in fact be responsible for mild disease separately but when combined with other hazards, may invoke a more serious effect.

Staying informed
The most recent year for which the USEPA has completed data on state violations is 1998. USEPA results indicate that based on the information reported to the agency by individual states, 20 percent of reporting public water systems recorded some kind of violation—102,437 violations total. Eighty-four percent of the violations were for monitoring and reporting infractions while 16 percent were health-based violations. Of the health-based violations, 7 percent were due to chemical contaminants, 74.5 percent exceeded the Total Coliform Rule, 1.6 percent exceeded the lead and copper rule and 17 percent violated the Safe Water Treatment Rule. 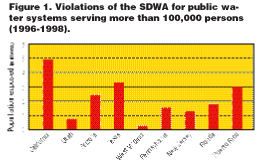 Violations from utilities serving very large populations—more than100,000 persons—are of particular concern since a health violation has the potential to expose a larger number of people. The states with the most utilities serving over 100,000 consumers reporting violations in 1996, 1997 and 1998 were Nevada, Puerto Rico, New Jersey and Arizona; however, those states whose violations affected the most people were California, Texas, Puerto Rico and Arizona (see Figure 1). 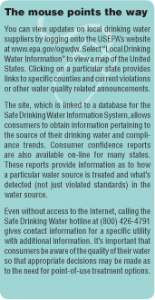 Conclusion
Although the USEPA is keeping regulatory tabs on local drinking water suppliers, information on contamination events aren’t available until long after exposures have occurred. Consumers may wish to access information on their particular watershed more frequently and determine how much confidence they have in their public drinking water supply. Local consumer confidence reports—also known as water quality reports—should be available from your local water utility or service provider. Knowing the violation history of individual water supplies may help consumers determine the need for additional point-of-use treatment options.