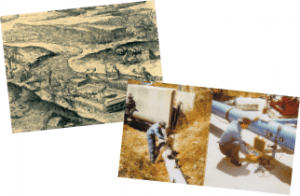 The future is often a tricky thing to accurately forecast. That’s why “primitive” and “fascinating” is what first came to my mind when I ran into this peculiar water-related story. As a reader with ties to the water quality improvement industry, I’m sure you’ll find it perhaps foolish, very unscientific and even puzzling to say the least.

Picture this: An old, wise man fills a bowl with water just taken out of a well; carefully and in slow motion, he sets several spiders on the water’s surface (amount, variety, gender and size known only to him); he sits on the ground and watches. What for, you might ask? We all know many indigenous tribes around the world have plenty of legends and stories related to the precious liquid that gives us life—water. Nevertheless, prediction of the future by analyzing a spider’s movements on the water surface was practiced only by the Purepechas—a native tribe of people from a region in central México—to my knowledge.

We have come a long way since these events took place and it’s thanks to technological advancement that we can now say, “How interesting!” In paradox, the truth is we’re still not capable of predicting the future. However, thanks to statistics, reports, projects and profiles, we get as close as possible to effectively envisioning an almost clear picture of what lies ahead.

Imbalance is present
According to figures by the Mexican National Water Commission (Comisión Nacional del Agua or CNA), México’s fresh water availability is 475 cubic kilometers (km3)—114 cubic miles (mi3)—of which 63 km3 is groundwater and the remaining 412 km3 is surface water. It also translates to 5,125 cubic meters per person (m3 /person)—or 180,989 ft3 /person—but territorial diversity in climate and landscape causes an unfair share. In the northern part of the country where rainfall is more sparse and the terrain more arid, only 100 m3 /person (3,531.5 ft3 /person) of water is available, representing quite a contrast to the wet jungle in the southern state of Chiapas where 17,000 m3/person (600,355 ft 3 /person) of water is found.

There are 600 aquifers recorded in México. The major ones are located in interior drainage basins, on the coastal plains and in narrow bands along major streams and rivers. To date, 100 aquifers are known to be overdrafted or exploited. Regarding pollution levels, figures vary but we know for a fact that rivers are highly contaminated. The National Water Commission reported that 914 water treatment plants had been built in México, but only 727 were in operation in 1998. One hundred percent of wastewater treatment is only performed by Servicios de Agua y Drenaje de Monterrey (a water works system serving 710,000 consumers proportional to 3.5 million inhabitants, located in Northern México). Presently, environmental laws and regulations are under strong review, with improved sanitation being a priority. Figures from 1998 show that for a total population of 95.8 million, 86.4 percent had potable water and 72.4 percent had proper sanitation (see Figure 1).

After NAFTA
Since the signing of the North American Free Trade Agreement (NAFTA) in 1993, quality control, standardization and certification of products have been encouraged and enforced in all industries, including water treatment. Water and wastewater treatment infrastructure—while not to the degree or as quickly as initially promised—are being strengthened with the assistance of binational organizations like the Border Environmental Cooperation Commission (BECC/COCEF), North American Commission for Environmental Cooperation (NACEC/CCAAN), North American Development Bank created as a result of NAFTA. In addition, new environmental laws and stricter enforcement of old laws are bringing about efforts to better manage the potable water and sewage systems in a decentralized manner that’s opened up to more citizen participation.

The Mexican Water Technology Institute—Instituto Mexicano de Tecnología del Agua (IMTA) —developed a product and quality control certification system at the production line level, allowing manufacturers to be listed as certified product suppliers for the water sector. It’s currently distributed to 1,500 users and includes manufacturers from United States, Canada, United Kingdom and Spain. The supplier’s list is now validated by CERTIMEX (equivalent to NSF) in its latest version and will be of special interest because of México’s NOM-180-SSA1-1998 regarding bactericidal claims for residential water filters. Draft of the NOM stated that potability was guaranteed if a water filter could claim removal of 95 percent or higher of all mesophilic bacteria and coliform bacteria.

Since 1999, 11 institutions were involved in its manufacture with the main objective of assisting the population in their water quality consumption and health related concerns as municipal distribution. As stated before, systems don’t comply frequently to good standards and domestic equipment for water treatment didn’t have a legal framework for its manufacture or import. As a result, effective Dec. 30, 2000, residential water filters will be required to remove 95 percent of all mesophilic bacteria, and 99.99 percent of all coliform bacteria.

With the goal of setting better national quality standards, the CNA also certifies water quality control laboratories in the country (80 private and non-private to date) for their facilities, technical know-how and performance.

In 1995, CONOCER—which is the Consejo de Normalización y Certificación de Competencia Laboral (Normalization and Certification Council for Competent Labor)—was created as the result of a new vision of improved human resources in México and establishes a link between the education system, industry and the individuals wishing to become certified. The project relates to all major economical and productive activities in the country, working in conjunction with the Public Education Ministry—Secretaria de Educación Pública (SEP), and the Work and Social Prevention Ministry—Secretaría de Trabajo y Previsión Social (STPS). The venture is sponsored by the World Bank and has 64 nationwide Labor Competence Committees (CNCL) that keep a close link with 13 private national universities and all technical colleges in the country. The 440 labor competence norms to date, done by experts in each field, contain the basis for quality in the tasks performed and assure that future curricula will contain labor competence norms and standards of each industry. CONOCER is ISO 9001 certified and was included in México’s short list for the 2000 National Quality Prize.

Among the labor competence committees relevant to the water treatment industry, we find the CNCLs for:

The first two are national. The last, was established as a subcommittee involving only the water works system in the Federal District, which is equivalent to the District of Columbia in the United States. It’s of special interest as it oversees the metropolitan area in México City, where a task force of approximately 12,000 workers serves about 20 million people.

In the past, a nationwide scarcity of adequately trained specialists in water and sanitation prevailed. With the new capacity of technical support, norms are being generated, operational manuals are being produced, courses are made more available, scientific seminars, videos, virtual courses and many other technical aids for various educational levels will assist everyone in the industry.

Strong support for the work in hand has been provided by close collaboration between various national associations: Producers & Distributors of Purified Water (Asociación Nacional de Productores y Distribuidores de Agua Purificada, ANPDAP, A.C.); Water and Sanitation Enterprises (Asociación Nacional de Empresas de Agua y Saneamiento, A.C. ANEAS); the Mexican Hydraulic Association (Asociación Mexicana de Hidráulica or AMH); United States-México Foundation for Science Fundación México-Estados Unidos Para La Ciencia or FUMEC; and CNA, IMTA and private corporations. Above all, this work is supported by the willingness and desire to learn shown by those workers who, on a daily basis, are in charge of the hydraulic infrastructure and the public health system in México.

With the opening in last October of the Mexican Center for Water and Sanitation Training (CEMCAS) built with the French government’s assistance near México City in Texcoco (not yet officially inaugurated), a new scope for the sector in continuing education’s program has been established.

Conclusion
Collaboration indeed is the keyword in applying improved methodologies to training and certification of water treatment professionals. The methodology established by CONOCER offers a national legal framework for more useful water planning, management, operation and monitoring. Implementation of the Mexican certification system for human resources is becoming a model for Latin America, as the concept has drawn attention in several countries and the methodology is becoming an export item. With this program of enhanced and practical training as provided by CONOCER, a better future is assured “without the use of spiders” to assure the future of water quality.

Linda Wurts currently coordinates the Committees for Labor Competence for the Water Industry in México for CONOCER. She has a bachelor’s degree in chemistry and postgraduate work from the University of Maryland and George Washington University (nutrition and genetics). She has worked at the National Institutes of Health and the American Red Cross. She is a certified consultant and a certified water specialist. Wurts is a member of Water Quality Association’s World Assembly Division. She can be reached at CONOCER, Av. Constituyentes 810, Col. Lomas Altas C.P. 11950 México, D.F., +52 5967 0989 (cell), +52-5261-5818 (fax) or email: http://alec@prodigy.net.mx and mie@conocer.mexis.com.