Summary: There’s important news for industrial companies requiring deionized (DI) water. Producing pure water without frequent replacement of ion exchange bottles is now a practical reality. The latest EDI technology offers the capability to handle even the most demanding pure water requirements, along with a host of other benefits.

Electrodeionization, known throughout the water industry as EDI, is not new. In fact, commercial EDI has been around for more than 15 years. Though earlier systems could manage only low flow rates and often had reliability problems, EDI as it exists today can handle the most demanding water treatment requirements of an extremely broad range of industries.

Historically, water has always been vital to industry. Though fundamental characteristics required by industrial users—fewer chemicals, less waste, simpler operation and lower operating costs—have remained basically the same, the technology that has sustained the water treatment industry has seen many changes. Today’s RO-EDI based systems are fundamentally changing the way we look at water purification.

In the 1960s and ’70s, the levels of purity demanded by industry were met by chemically regenerated ion exchange technology (see Figure 1). The applications of the day were less demanding and 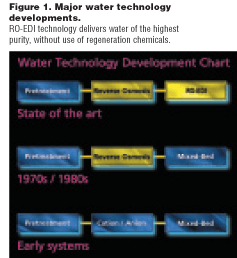 little consideration was given to the long term effects of chemical usage.

Through the ’70s and into the ’80s, growing awareness of the need to reduce chemical usage and costs began the shift to a new paradigm within the water industry. The result was the new application of an existing technology—reverse osmosis (RO). It used membrane separation technology to replace ion exchange in the primary deionization system. As membrane costs fell, it became more attractive to use RO instead of cation/anion ion exchange bottles at lower flow rates and TSD levels. Over time, RO achieved wide acceptance.

RO/mixed-bed based systems met the DI water requirements of a wide range of applications from power generation, electronics manufacturing and pharmaceutical industries. However, the industry continued to rely on mixed-bed technology for the final stage of ion removal. The chemical usage and related (off-site) ion exchange regeneration infrastructure required by the mixed-bed stage meant that portable ion exchange bottles, or tanks, were still required.

The latest EDI equipment is a very cost effective alternative to the mixed bed ion exchange bottles and have made the total elimination of off-site ion exchange resin regeneration a practical reality. EDI was first developed more than 40 years ago as a chemical-free process, primarily for laboratory work. Recent innovative approaches that simplify membrane composition and decrease membrane area have resulted in substantial savings over earlier technology.

How advanced EDI works
A typical system involves a simple process train—pretreatment, RO and EDI. A continuous process, EDI removes ions from water using conventional ion-exchange resin, but with a key benefit. In EDI, an electrical current is used to regenerate the resin continuously, eliminating the need for periodic chemical regeneration. 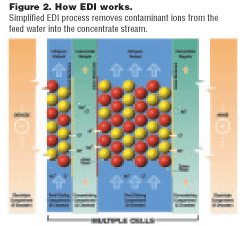 A typical EDI stack is made up of a number of dual-chambered cells sandwiched between two electrodes (see Figure 2). Within each cell there are two types of chamber: a “Dilute” or “D” chamber through which water is fed for deionization, and a “Concentrate” or “C” chamber used to collect and remove unwanted ions. The “D” chamber is filled with a mixture of cation and anion exchange resins. These ion exchange resins are located between two membranes: a cation membrane, specifically designed to allow migration of only cations, and an anion membrane, which allows the migration of only anions.

In a typical EDI system, 90-95 percent of the feed water is directed through the “D” chamber; and 5-10 percent is diverted through the “C” chambers. Concentrate water is recirculated using a pump to achieve higher flow velocity through the stack, improving performance. Concentrated ions are removed from the stack by bleeding off a fraction of the water from the “concentrate loop.” This water, with a pH typically in the range of 5 to 8, can be recovered and directed back to the inlet of the pretreatment system (see Figure 3). 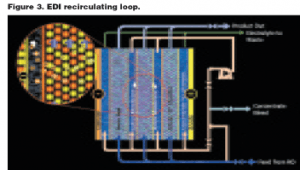 During the electrodeionization process, ionic contaminants in the feed water are removed resulting in highly deionized water.

EDI stacks currently in use are guaranteed to produce resistivities in excess of 16 megohm-centimeters (see Figure 4). In fact, RO-EDI based systems 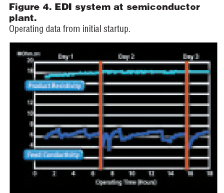 are capable of meeting the most demanding water quality requirements in the industry today. As a result of recent improvements, current advanced EDI technology is meeting today’s application requirements and has achieved wide acceptance across a broad range of industries.

Future of industrial treatment
The distribution of EDI technology is currently undergoing dramatic expansion. Again, similar to the market development of RO, a widespread distribution strategy has resulted in an abundance of suppliers and assures customers of the local service expertise they require. Current RO-EDI technology is substantially reducing chemical usage, simplifying operations and reducing overall inherent costs.

Conclusion
What does the future hold? In all industry segments, we’re seeing a growing emphasis on reduced chemical usage. In three to five years, it’s expected 85 percent of all industrial water treatment systems will be RO-EDI based systems. The remaining 15 percent will be special applications where incremental costs of pretreatment and other considerations don’t offset the inherent benefits of a chemical-free RO-EDI system. EDI is now well established in the marketplace and is being accepted across a broad range of industries. The direction of the technology will be determined by the continued needs of industry for pure water produced without chemicals.

Dr. David F. Tessier is the research and development manager of E-Cell.

RO-EDI technology delivers water of the highest purity, without use of regeneration chemicals: