Summary: Ozone is increasingly seen as an effective disinfectant and oxidant in water treatment as well as wastewater treatment plants. Furthermore, with the promise of additional emission regulations, steps are being taken to seek the most practical and low-cost solutions. An argument for catalytic technology is made here.

Use of ozone as an oxidant and disinfectant in potable water treatment, wastewater treatment and in industrial processes is steadily increasing. Ozone is the second most powerful oxidizing agent, exceeded in its oxidation potential only by fluorine—which is not used commercially. It is used extensively in water treatment as a disinfecting agent and as an oxidizing agent to assist in the removal of organic and inorganic contaminants, as well as viruses and bacteria.

Oxidizer extraordinaire
Ozone is a very versatile oxidizing agent. It’s generated on-site and reacts very rapidly with the targeted contaminants, decomposing to oxygen in relatively short order. Ozone is the triatomic allotrope of oxygen (O3), which develops as a result of catalytic processes from atmospheric oxygen, under the influence of high-energy ultraviolet (UV) radiation or high frequency electrical charges. That crisp smell after a lightning storm, for instance, is one way of experiencing ozone in nature. Ozone is often encountered as a by-product of many indoor processes involving coronas, such as printing and copying operations.

While ozone in the upper atmosphere protects us from harmful UV radiation, excess ozone in the air we breathe can cause serious health problems. These problems include reduced lung function, airway inflammation and greater susceptibility to infections. Ozone can also exacerbate allergies, trigger asthma attacks and, in the extreme, cause permanent lung damage. It can also be corrosive to many metals if a system is not properly designed and maintained.

The U.S. Occupational Safety and Health Administration (OSHA) requires that the indoor “threshold limit value” (TLV) of an eight-hour exposure be limited to 0.1 part per million (ppm). Worldwide tightening of ozone emissions will be intensifying within the next several years, forcing many operations to install control systems to destroy off-gas ozone to meet the new standards. This creates an opportunity for industry to step in and help provide the solution.

Excess residual ozone
During the process of ozonation, not all the ozone produced is consumed. Excess or residual ozone cannot be released to the atmosphere. Ozone’s half-life can range from a fraction of a second at 500°F to several hours at ambient temperatures, so any residual ozone must be captured and destroyed. Addressing the issue of emission control will mean financial expenditures for systems to lower ozone emissions to meet the regulatory standards. Attaining the required control of ozone emissions in the most cost-effective fashion is critical. There are several options available to effectively control ozone, with varying levels of cost efficiency.

Carbon decomposition
Activated carbon can be used to decompose ozone. However, the reaction between the ozone and carbon is chemical in nature and carbon is consumed in the process, making the process less cost effective. The use of carbon is also usually limited to the applications where the ozone concentration is relatively low. It is critical to note that a fire can start in activated carbon in higher concentration applications or where ozone is generated from a concentrated oxygen source.

Catalytic conversion
Ozone can also be destroyed catalytically. In this process, a catalyst is used to convert ozone into oxygen. A catalyst is a substance that increases the rate of chemical reaction without being consumed in the reaction. Unlike carbon, a catalyst is not consumed during the conversion of ozone; therefore the catalyst’s lifetime is extensive, usually several years.

One measure of the catalyst’s capability is that the oxidation reaction can occur at a significantly lower temperature as compared to the thermal non-catalytic oxidation reaction. Thus, with a catalyst present, the temperature required for the oxidation/reduction reaction can be significantly decreased. This results in substantial savings in operating cost, easier and safer operations, as well as lower capital costs for the catalytic oxidizers than thermal oxidizers.

The right catalyst
Precious metal catalysts, such as platinum/palladium catalysts, can be used to decompose ozone at a temperature between 125°F and 160°F. However, a residence time of approximately three seconds is required. The long residence time means that a relatively large volume of catalyst is required. The cost of the precious metal catalyst required for an effective system makes this type of catalyst cost prohibitive in this application.

Manganese dioxide catalysts also require only a 0.36 second residence time, which means relatively small catalyst volumes are needed, making the catalytic system with a manganese dioxide based catalyst very cost-effective. Also, the inlet concentration of ozone does not affect the amount of catalyst required or the design of the system. Ozone concentrations ranging from a few ppm to 12 percent can be effectively controlled by the use of this catalyst.

Figure 1 provides a brief summary of catalytic destruction vs. thermal destruction of ozone. 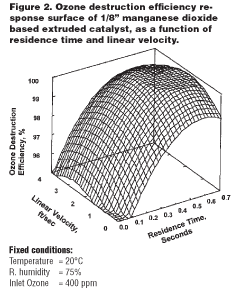 Manganese dioxide-based catalyst is typically available in 1/8-inch and 3/16-inch diameter extruded pellets, to minimize static pressure drop across the catalyst bed. The catalyst manufacturer can assist with the proper catalyst bed design to ensure that the most effective design criteria are used. A basic schematic drawing of a typical ozone destruction system is shown in Figure 3. 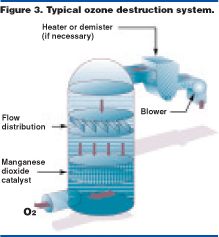 The catalyst manufacturer also recommends that the catalyst not be exposed to poisons such as sulfur compounds and halogens. These compounds will chemically react with the catalyst, altering the structure. This will result in a decline in the catalyst’s performance and a shorter lifetime.

These benefits are significant and measurable in dollar savings. The capital cost of a manganese dioxide-based catalytic system is approximately half the capital cost of a thermal destruct system and approximately one-third of the operational cost. Catalytic destruction of ozone with a manganese dioxide catalyst will ensure essentially complete conversion of ozone to oxygen to meet the more stringent emission regulations. Most importantly, however, emission regulations can be attained in a cost-effective fashion, minimizing the financial burden on the utility or industry.

Conclusion
The clear advantages of manganese dioxide catalysts for the destruction of ozone are the key reasons why these catalysts are so widely used in the potable water and wastewater industry and why this technology is considered the benchmark technology for destroying ozone emissions from off-gas operations. Manganese dioxide catalytic technology is well- poised to address the future more stringent emissions regulations by providing a cost effective, yet simple and most practical solution to meet these regulations.