Granular activated carbon management (GACMan), a product of WRc of the United Kingdom, is a software tool developed to predict removal of contaminants from water by adsorption. Modeling is carried out using data from GACMan’s internal database of contaminants, activated carbons and water types. Alternatively, the software can be calibrated by the user for a specific application.

Returns on software
GACMan is used by water utilities and carbon manufacturers in the UK and Europe to optimize design and operation of their GAC adsorption systems. Some benefits include:

Originally developed to predict adsorption of pesticides onto GAC, the software has recently been upgraded to simulate removal of other water contaminants, including organic compounds—such as color, total organic carbon (TOC), trihalomethanes (THMs), and taste and odor causing compounds—such as geosmin and 2-methylisoborneol (MIB). The latter two compounds are well known for their earthy-musty smell and contribution to objectionable odor by potable water customers. The software also can predict adsorption on other media and is used to simulate removal of arsenic from groundwater on activated alumina and granular ferric media (GFM).

Software description
GACMan is a user-friendly adsorption software package. It can be used in design or simulation modes. In design mode, the software predicts performance of a single GAC adsorber and can be used for sizing a GAC plant to obtain the required bed life. In simulation mode, it’s used to simulate performance of a full-scale plant and predict quality of the blended plant output as well as performance of each individual adsorber. It can then estimate remaining bed life and ability of a plant to cope with variations in flow and contaminant loading.

The software incorporates a fundamental mathematical model of adsorption that predicts the concentration profile of an adsorbate as it passes through the adsorber bed. The model assumes external film and surface diffusion mass transfer mechanisms, while adsorption equilibrium is described by one of the Freundlich, Langmuir or Redlich-Peterson isotherms. These isotherms are the approved test method to estimate adsorption capacity at a given concentration in the raw water. Multicomponent adsorption is modelled by IAST (ideal adsorbed solution theory) or extended isotherms. The model can be calibrated by carrying out laboratory rapid column tests to cover a range of contaminants, water types and carbons.

Utilization
GAC is installed on many water treatment plants in the UK, mainly for the removal of pesticides from surface and ground waters, as well as control of taste and odor. Examples are given below showing how GACMan has been used in design and optimization of such plants. A third example describes how the software was used to model the adsorption of arsenic from groundwater.

In 1996, treatment at a 3-million-gallon-per-day (mgd) surface water plant in the UK was reviewed to improve treated water quality. One problem was caused by presence of pesticides in the raw water—atrazine, chlortoluron, isoproturon, MCPA, mecoprop and 2,4-D were present throughout the year at variable concentrations (see Figure 1). 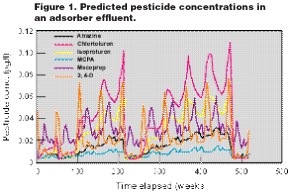 GACMan was used to assess a number of treatment options for pesticide removal:

Simulations were carried out to investigate the three treatment options and their capabilities to achieve the required removal of pesticides, particularly at times of seasonal peak loadings. Where GAC adsorption followed ozonation or dosing with PAC, the pesticide concentrations on the adsorbers were reduced according to the efficacy of the pretreatment.

The simulations investigated pesticide removal over a 10-year period in four GAC adsorbers with empty bed contact times (EBCTs) of 10 or 20 minutes. The simulations investigated a range of GAC types (Filtrasorb 400, Picabiol and Row 0.8 Supra) using pesticide adsorption isotherms from the software’s internal database.
Figure 1 shows predicted pesticide concentrations in the effluent from an adsorber when operated with an EBCT of 10 minutes.

Overall, results indicated that GAC treatment alone would be inadequate to remove pesticides under the conditions modeled. GAC treatment following ozonation or dosing of PAC both gave adequate treatment, consistently reducing the plant effluent pesticide concentration to below 0.1 micrograms per liter (µg/L).

The cost of regeneration makes GAC one of the most expensive water treatment processes. At around $750 per ton for regeneration, any extension of bed life can give substantial cost savings, provided security of water quality is maintained.

Anglian Water included GACMan modelling in comprehensive trials designed to optimise pesticide removal using ozone and GAC. One outcome of this work was the extension of the GAC regeneration interval from two years to more than four years with resultant savings in operating costs. In addition, Anglian Water has used the software to verify optimal design of a number of GAC adsorption plants.

Similar benefits and cost savings have been reported by other utilities using the program.

GACMan was used to investigate the adsorption of arsenic from groundwater onto GFM. The software was calibrated using data from an extensive pilot plant trial lasting over 12 months. The calibration used data from a trial carried out in a 100-mm diameter column operated with an EBCT of three minutes.

Following calibration, GACMan was used to simulate removal of arsenic on a 5 mgd full‑scale plant. Seven runs representing various operating regimes were modelled (see Table 1). Regeneration or replacement of the GFM was triggered when the arsenic concentration in an adsorber effluent exceeded a predetermined value of either 10 or 15 mg/L.

Overall, the results indicated that the arsenic concentration in the plant effluent would not exceed the maximum permitted value of 10 µg/l, but with a different margin of safety in each case.

Conclusion
Software tools designed to predict media performance are useful to managers and operators of drinking water plants. Selection of media and estimating remaining service life are but two uses for the GACMan software program.

Acknowledgment
The author would like to thank Glenn Dillon, Gary Buck and Richard Head of WRc, the producers of the GACMan software program for their assistance on this article. Their addresses are: Glenn Dillon and Gary Buck, WRc Inc., Frankland Road, Blagrove, Swindon, SN5 8YF UK; and Richard Head can be reached in Trevose, Pa., at (215) 244-9972.

About the author
Dr. Henry Nowicki is CEO of PACS Inc. of Pittsburgh. Nowicki is responsible for activated carbon products and services at PACS. He conducts research and development on activated carbon composition and adsorption. He has developed related software programs and the AC TESTER instrument to evaluate used and unused activated carbons, conducts ASTM laboratory, GC/MS and ICP/AA analyses and offers consulting services. Also a member of WC&P’s Technical Review Committee, Nowicki can be reached at (724) 457-6576, (724) 457-1214 (fax), email: http://HNpacs@aol.com or website: http://members.aol.com/hnpacs/pacs.htm.