When Kevin of Placerville, Colo., takes a warm shower in the morning and his wife, Linda, gets a glass of distilled drinking water from her special kitchen faucet—they’re both benefiting from the same new energy-sharing product. An integrated home water distillation system produces high purity distilled drinking water and, as a by-product of the energy used, gallons of hot water for household use.

Distillation energy cycle
By understanding the energy cycle in the production of distilled drinking water, it’s possible to reuse energy utilized in the distillation of water with beneficial results.

Distillation requires energy. In water distillation, this energy is usually supplied by an electric heating element. Looking at it from an energy perspective, there are four steps in the production of distilled water.

Steps 1 and 2 require the input of energy and Steps 3 and 4 require the removal of energy. Surprisingly enough, Step 2 takes much more energy than Step 1 and, therefore, when energy is removed, Step 3—and to a lesser extent, Step 4—provides energy that’s either wasted or can be used more efficiently.

The relative amounts of energy are shown in Figure 1. Metric measures are used due to the direct correlation from one measure to the other. 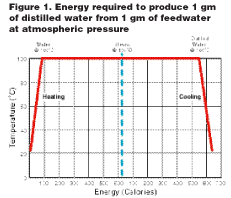 To heat 1 gram of water by 1oC, 1 calorie is required at atmospheric pressure. To convert 1 gram of water at 100oC to steam at 100oC, 540 calories are required. Note that as more energy is applied to water at 100oC, the temperature doesn’t rise but the energy supplied is used instead to convert water to steam. All science students know this as the “latent heat of vaporization.”

By utilizing the energy produced as a by-product of the distillation process to heat water for household use, an integrated product can be developed that produces both distilled drinking water and hot water for other household uses. 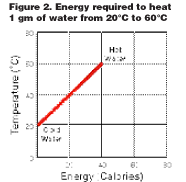 Staying with the metric system, Figure 2 shows that it takes 40 calories of energy to heat 1 gram of water from 20oC to 60oC. From Figure 1, there’s 540 calories of energy given off in Step 3. This energy, if used to produce hot water, would produce 13.5 (540 ¸ 40) grams of hot water assuming no heat loss.
Stated in terms we’re more familiar with—for every gallon of distilled water produced, 12 to 15 gallons of hot water can be produced depending on the desired temperature of hot water.

An integrated approach
To accomplish this in practice, a system has been devised that incorporates a commercially available 30-gallon water heater to serve as a “heat recovery tank.” This tank is placed on a water heater stand. For easy servicing, the distiller is built on a tray designed to slide underneath the heat recovery tank. The heating element from the water heater—now called the heat recovery tank—is removed and replaced with a hollow stainless steel tube (condenser) in a fold-back design to maximize heat exchange surface area (see Figure 3). The steam tube from the distiller boiling chamber is connected to the upper end of the condenser and the other end of the condenser is connected to the storage tank.

When steam is generated by the distiller, it rises and goes into the condenser. With the cold water on the outside of the condenser, an immediate temperature gradient is formed through the wall of the condenser. Heat is transferred from the steam through the condenser wall and heats the cold water inside the heat recovery tank. When sufficient heat is removed from the steam, it converts to distilled water and flows into the storage tank (see Figure 4). When Linda wants distilled drinking water, it’s dispensed by a built-in, demand pump directly to the special faucet or refrigerator from the storage tank. 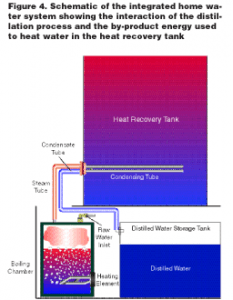 Energy studies utilizing automatic data-loggers indicate that up to 85 percent of energy used to distill the water is recovered inside the heat recovery tank as hot water. The hot water from the heat recovery tank is fed into the primary residential water heater on the cold water side. As a result, the heating elements in the primary water heater are used much less frequently, thus representing the saved energy. Assuming all the hot water produced is used, the cost of production of a gallon of distilled water is about 4 cents less than a traditional air-cooled distiller and much less expensive than bottled distilled water.

The distiller installed alongside a regular home water heater is shown in Figure 5, on page 52.

Special Southwest application
This concept has particular application in the Southwest region of the United States, where drinking water purity and energy and water conservation are important consumer issues. The unit will produce distilled water for about 0.5 kilowatt hours (KwH) per gallon and has virtually no wastewater.

Conclusion
Kevin and Linda aren’t alone in testing this new concept. Approximately 70 prototype distillation systems of this type have been field tested over several years in a wide range of water conditions throughout the United States. The units performed well and were generally well received.

Integrating distillation with heat recovery offers not only energy cost savings, but reduces the amount of water used per household—for a more environmentally friendly solution to quality drinking water needs.

About the author
Al Meder is president of Pure Water Inc. in Lincoln, Neb. He’s a New Zealander by birth and holds degrees from the University of Otago, Dunedin, New Zealand, and a master’s degree from Johns Hopkins University in Baltimore, Md. Meder is the current chairman of the Water Quality Association’s Distillation Committee. He can be contacted at (402) 467-9300, (402) 467-9393 (fax) or email: almeder@purewaterinc.com