Water: A New Century of Opportunity in Canada

According to the Canadian Water and Wastewater Association (CWWA), which is the national counterpart to the American Water Works Association (AWWA), a national water crisis is forecast for Canada in the coming century.

Pollution, habitat destruction and climate warming will compromise the country’s fresh water supplies so dramatically in the next 50 years that drinking water will be in a sad state of affairs, warned David Schindler—one of the world’s leading water experts, University of Alberta ecology professor, founder of the Ecological Lakes Project for the Canadian Department of Fisheries and Oceans near Kenora, Ontario, and winner of the 1991 Stockholm water prize. Without increased funding for fresh water research, infrastructural improvement and a national water strategy, fresh water will become Canada’s foremost ecological crisis early in the 21st Century.

An abundance of scarcity
Warming temperatures can diminish water quality and quantity in Canada. Recent warm spells—whether credited to El Niño, La Niña or general global warming—have caused glaciers to thin and recede in the Upper Rockies, the source of most of Western Canada’s drinking water. This is ironic considering the country is credited with having the third highest volume of renewable freshwater resources in the world (see Table 1). 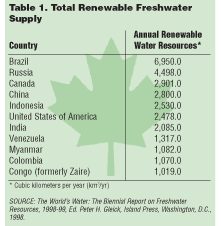 The CWWA, in a recent policy statement, reported: “Despite the best efforts of water utilities on rare occasions, environmental or technical conditions will arise that may result in the distribution of microbiological unsafe water. The water utility may be able to detect these conditions ahead of epidemiological evidence. Water utilities should establish a local water quality team comprising of those responsible for source water protection, water treatment distribution, water quality monitoring and public health.”

Investing in change
Canada’s water problems exist across the country. Ottawa has been urged to invest $2.2 billion in safe water. The country’s provinces and territories want Ottawa to spend funds on the infrastructure—water and sewage upgrades. Local government ministers from across the country are sending the same message to the federal government. In turn, the federal government has agreed to invest $9.9 million to find better ways to treat Canada’s water and wastewater. The funding, part of the government’s Technology Partnerships Canada program, will focus on improving water systems’ energy consumption and purification.

Mayors from Canada’s largest cities are lobbying the federal government for upgrades to the nation’s water, environment and transportation infrastructure. The Federation of Canadian Municipalities’ (FCM) Big City Mayors Caucus descended on the capital for a final round of pre-budget meetings with the Prime Minister and other government officials following the November 2000 elections. The already burning issue was fanned even hotter after a December report indicated nearly half of Ontario’s 645 municipal water treatment plants—311—were ordered to take corrective actions to meet new drinking water regulations implemented after the worst E. coli outbreak in the country’s history in Walkerton, Ontario.

Using the FCM’s October 1999 Quality of Life Infrastructure Proposal as a basis, the group says a total of $9 billion annually over 10 years is required to be invested for the country’s health and economic future. Out of the total, the group is asking for $62 billion over the 10-year period to invest in water and wastewater systems, including water and wastewater treatment plants, distribution and collection systems (for potable water, sanitary and industrial effluent and storm water) and water for conservation and management.

Heightened public awareness
Reports of water quality problems from source water are being published regularly. Excluding all the newsprint dedicated to the eight-month boil water order in Walkerton after the E. coli outbreak there killed at least seven and sickened 2,300, here are some recent stories:

Regulatory review
Meanwhile, the Canadian government’s Health Canada department keeps trying to put roadblocks in the path of the Canadian point-of-use/point-of-entry (POU/POE) water treatment industry. Back in 1980, the federal Health Protection Branch (HPB) proposed to ban the sale of carbon filters. After two years of Canadian Water Quality Association (CWQA) and Water Quality Association (WQA) efforts and negotiations, the HPB withdrew their plan to ban the sale of carbon filters.

In the early 1990s, the HPB conducted a survey (Abt study) to ascertain the state of industry product sales. This department sent Bill C-76 to parliament, which was all-encompassing in the control of POU/POE equipment. Certification and regulations were the Bill’s purpose. Bill C-76 died on the order paper—or legislative docket—as parliament prepared for a federal election. Still, with a few legislators and regulators determined to control the industry, Bill C-14 was placed on the newly elected government’s order paper. The industry found the bill to be too broad in scope as it tried to control too many diverse products.

It was lobbied against by the Safe Drinking Water Systems Coalition—which consisted of the Canadian Association of Pump Manufacturers, Canadian Institute of Plumbing and Heating, Canadian Copper and Brass Development Association, CWQA and the Nickel Development Institute. These associations represent the views of several hundred reputable Canadian companies.

As a result of this consortium’s strong opposition to Bill C-14, the legislation again died on the order paper as parliament chose not to proceed. During proceedings, the consortium commissioned a study of Canadian water supplies, which was performed by the Cantox Group and resulted in establishing that any water supply problems were caused by source water and not by the water treated by industry products.

Supporting industry solutions
The CWQA strongly supports voluntary product certification through standards of ANSI/NSF and the Canadian Standards Association (CSA). In addition, CWQA promulgated “Carbon Water Filter and Promotion and Advertising Guidelines as well as Water Quality Industry Product Promotion Guidelines.” These guidelines are mandatory for the membership of CWQA and must be adhered to.

The tragic water contamination problem in the rural town of Walkerton, Ontario, has come to a conclusion. The water supply has been declared “safe” to drink, and the taps only recently have been turned on. Almost six months after residents began falling ill from drinking contaminated water, the water has been judged safe by the environment ministry. Still, more than 20 deaths were suspected of being linked to the E. coli contamination.

Upgrading and disinfecting the water system—including new filtration systems, new piping and improvements to the treatment plant—have removed any traces of contamination. Allowing consumers the choice of whether to augment these systems with in-home water treatment devices is a right that should endure, giving them a greater peace of mind.

Conclusion
The expressed Canadian drinking water issues described above lead to opportunities for the Canadian POU/POE industry. With all the various problems expressed in the foregoing, the marketplace is more than ready for increasing sales of water treatment equipment.

Through effective public relations such as newspapers, the Internet, national radio and television, CWQA will continue to play a key role in educating consumers in making the appropriate decisions when it comes to improving the quality of their water.

Cooperative working relationships with governments and certification organizations to help develop standards that enhance public safety and health will benefit everyone. That’s our mission in promoting the individual right to water quality.

Are you ready for a century of opportunities?

About the author
Lou J. Smith is a special water treatment consultant to the Canadian Water Quality Association, in Etobicoke, Ontario. With over 45 years of experience in the water treatment business, Smith is a past president of CWQA and the Water Conditioning Association International (now WQA), and the previous CWQA executive director. He can be reached at (519) 747-1247 or (519) 747-9388 (fax).