Summary: With increasing scrutiny by regulatory officials of health risks associated with heavy metals and difficulty of removing many anion forms of these contaminants from drinking water, properties of a new resin emerging in this market offer some advantages. This is the second in a two-part series on special media.

Strongly basic anion exchange resins were introduced to the field of water conditioning and purification in the late 1940s and rapidly became important tools in the industry.1 Their persistent, positively charged active sites create the ability to remove undesirable, negatively charged species from water over a wide pH range providing an unparalleled technology for color/tannin reduction and water demineralization. These applications continue to account for the majority of strong base anion resin volume used in water treatment today.

However, the dramatic changes in the regulatory environment for water treatment over the past 25 years under the Safe Drinking Water Act (SDWA) have driven anionic contaminant removal to become an increasingly important segment of the industry. Arsenate, bromate, chromate, nitrate and perchlorate are among the anions finding their way onto lists of emerging drinking water contaminants at the U.S. Environmental Protection Agency (USEPA) and some state health departments. In fact, the chemistry of these problem ions and extremely low maximum contaminant levels (MCL) mandated by regulation are allowing anion exchange processes to compete for best available technology status with more traditional water purification methods, such as coagulation, filtration and adsorption to name a few. Every level of the water treatment marketplace—residential, commercial and municipal systems—holds opportunities.

New chemistry for anion exchange
A significant portion of the advances in ion exchange technology enabling it to challenge traditional methods has been in design and process engineering. The most fundamental chemical aspects of strongly basic anion exchangers have only changed modestly in five decades. The resins typically used are standard polystyrene gel-type anion resins similar to those originally developed years ago. Admittedly, the resins themselves have improved. They now can be obtained in gel form or macroporous, as Type I or Type II, as polystyrene or acrylic based, and sulfate or nitrate selective—but chemically, the active sites of the resin have remained aliphatic quaternary ammonium groups (see Figure 1). These basic 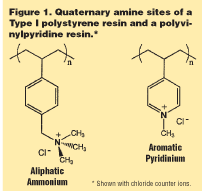 units provide the positive charges necessary for the polymeric resin to function as a negative ion exchanger.

Quaternary ammonium groups are not the only means of incorporating persistent positive charges in polymers. An advance in this aspect of ion exchange technology was the development of aromatic quaternary pyridinium resins (see Terminology). The basic building block of these polymeric materials is the vinylpyridine monomer, the basic structure of which can be found in Figure 1.

Vinylpyridine is an organic chemical with an intrinsic, aromatic amine group that provides functionality to polymers containing the compound. Unlike the pendant amine groups that “hang” from the polymeric backbones of standard resins, the nitrogen atom of vinylpyridine’s amine is an inherent part of the pyridine ring structure. Chemical modification of the pyridine sites of the polymer yields positively charged, strongly basic pyridinium active sites for anion exchange applications. The resins obtained are well suited for water purification systems, typically having capacities and physical specifications comparable to the leading anion exchange media. Vinylpyridine-based resins, as a result of the fixed amine functional group, do have several advantages over their polystyrene and acrylic predecessors in the areas of stability, leaching and anion selectivity.

A stable foundation
The increased oxidative and thermal stability of polyvinylpyridines relative to standard resins has been known and exploited in the specialty chemical industry for quite some time. Applications in the petroleum, metal purification and plating industries, such as spent hydrofluoric acid removal, metal extractions from concentrated nitric acid and acidic chrome recovery, utilize vinylpyridine polymer’s resistance to oxidation and degradation.2,3 The working lifetime of standard materials is greatly reduced under these chemically aggressive conditions. In fact, recent research has shown polyvinylpyridine strong base resins make excellent solid supports for oxidizing agents that convert alcohols to aldehydes.4 For the water professional, less oxidation by chlorine or ozone, a primary route of resin degradation,1 should translate into higher retained capacity and longer service life.

Furthermore, increased process operating temperatures are allowed by the use of vinylpyridine-based media. Greater thermal stability enabled the development of a large-scale separation process for the agricultural products industry. This thermally managed chromatographic purification and dewatering method for fermentation acids allows the consolidation of several purification steps into one-unit operation. The broad temperature swings involved in the adsorption/desorption cycles—which create osmotic stress—are easily handled by the polyvinylpyridine resins. Although the majority of water deionizations are performed at room temperature, certain segments of the marketplace— condensate polishing in the power generation industry for example—could benefit from the improved thermal properties.

With the highest integrity
The natural amine functionality of the vinylpyridine molecule provides excellent leaching characteristics to the polymeric products derived from it. When used in a food contact application, such as the purification of drinking water, resins must exhibit insignificant levels of extractable chemicals for obvious reasons. Polyvinylpyridine commercial products have met federal guidelines and been accepted for food contact use by customers in the agricultural products and bottled water industries.

Of further concern to potable water professionals are the amines themselves. Recently, a styrene resin manufacturer hesitated to recommend Type I resins for perchlorate remediation since the resins can impart a fishy odor to drinking water.5 Typically, trimethylamine and dimethylethanolamine are the amines used to manufacture Type I and Type II resins. These amines have a strong fishy odor and resins incorporating them can impart a bad taste and odor to drinking water. As water passes through a treatment bed of the resin, a slow, chemical degradation of the strongly basic quaternary ammonium sites and weakly basic amine groups takes place.1

Presumably, low levels of amine decomposition products are thereby released into the effluent water accounting for the fishy odor and taste.

Poor tasting product water is a major reason many in the bottled water industry, arguably one of the most taste-and-odor-sensitive markets, prefer not to implement treatment processes that utilize standard anion exchange polymers. However, a polyvinylpyridium strong base anion resin has been commercialized for color removal from a premium brand bottled mineral water. Unacceptably high levels of natural organic matter (NOM)—humic and fulvic acids—were imparting a yellow-to-brown color to the product. Treatment with a polyvinylpyridine-based media completely removed the color while not affecting the signature taste of the mineral water.

The California Department of Health Services has suggested there may be an even more fundamental problem with using standard strong base anion exchange resins for water purification. N-nitrosodimethylamine (NDMA) is a carcinogenic compound that historically hasn’t been considered a common drinking water contaminant, but has recently been detected in deionized water, high nitrate well water and chlorinated drinking water.6 In June 2000, a Los Angeles County water treatment system found elevated NDMA levels, which were attributed to the resins used for nitrate removal.7 Although the mechanisms for the formation of NDMA in these waters have yet to be fully determined, there’s an established precedent that standard anion resins contain the appropriate precursors to generate NDMA.8,9 Since polyvinylpyridine materials are based on aromatic amine chemistry and don’t contain the NDMA precursors, the risk of increased NDMA concentrations due to the ion exchange system is significantly reduced.

Uniquely suited for selectivity
The aromatic pyridinium active sites of polyvinylpyridine resins coupled with their hydrophobic positively charged internal matrix give these polymers quite different selectivity and distribution characteristics relative to aliphatic ammonium-based media. In addition, the easily modified amine of vinylpyridine can be specifically tailored to obtain superior chemical properties for a given anion, process conditions or application.

Another application benefiting from an increased preference for monovalent anions is nitrate removal from drinking water. Typically, traditional Type I polystyrene resins in nitrate removal exhibit chromatographic peaking near the end of the exhaustion run. This can lead to the effluent nitrate concentration actually exceeding the nitrate MCL and 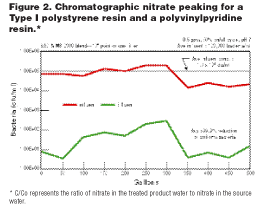 creating a potential health hazard because of premature dumping or breakthrough. The decreased preference for sulfate ion of polyvinylpyridinium resins appears to nearly eliminate the undesirable peaking of nitrate (see Figure 2).

Conclusion
Today’s market places demands on water professionals to continually provide improved treatment processes that can adequately remove a variety of problem contaminants. Unfortunately, no single media can address the multitude of issues for each and every application. Changing MCLs, new regulated contaminants and stricter taste-odor requirements of customers are merely a few factors complicating matters even further. Polyvinylpyridinium ion exchange resins offer an alternative to currently commercialized materials for many of applications of interest cited in this article. Their selectivity characteristics—particularly towards chromate, nitrate and perchlorate—may offer better treatment systems than can be achieved using standard resins and do so without contributing to taste-odor quality issues in the product water.

Vinylpyridine-based polymeric resins are uniquely suited to offer the water treatment professional a new option for solving the challenges they face in this current climate of increased regulation, especially those related to USEPA-mandated contaminants.