The company controls many prominent names in the industry—Fleck, Structural, Codeline and SIATA, which all hold premium positions in their market segments—and is the No. 1 maker of water conditioning control valves. Sister subdivision under Pentair Water Technologies, Pentair Pump & Pool Group also includes famous names such as F.E. Myers, PacFab and WellMate. 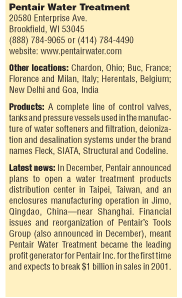 The parent company employs 14,000 people and has annual sales near $3 billion, of which almost a third come from its water treatment products this year.

Fernandez, who took over as head of Pentair Water Treatment in 1997, is a native of Argentina and holds an MBA from Stanford University. He discussed recent financial shakeups at Pentair Inc. affecting its automotive equipment and tools group, which have lead to the water group becoming the top profit contributor for the company. It’s expected to break $1 billion in 2001 compared to $100 million six years ago when it acquired Fleck Controls—an indication of the growth in the division.

He noted that Pentair Water is stretching out globally with growth in Europe, a new distribution center in Taiwan and a new joint venture company in China—in addition to efforts in India. Brazil is attractive but will have to wait because of less economic promise in the rest of Latin America comparable to other international regions, he said.

As for the U.S. market, Fernandez calls 2001 a year of caution because of stresses in the national economy that unfolded in the latter half of 2000, pressured by rising petroleum costs, stock market volatility and political uncertainty from the prolonged presidential election.

He talks about continuing undervaluation of the water treatment market by Wall Street, the potential regulatory impact of a new Republican administration, dealing with California’s tightening softener salt efficiency guidelines and competitive shifts between manufacturers and distributors with continuing consolidation within the industry.

All of these underscore the need for smaller and mid-level companies to form new alliances, develop new products and come up with innovative ways of doing business and providing services, Fernandez said. Regardless of political or most economic shifts, though, he said the water treatment industry—and Pentair—will continue to grow. That is one constant that can be counted on.