Nomads of the Water World: The Thrill of it All from the First State—Hibbs & Sons Water Treatment of Bridgeville, Del. 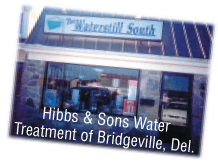 The days of being a salesman—“by accident”—of water equipment for a Wisconsin company seems like light years ago for Bruce Hibbs. It was actually 1988. He was made vice president of sales within a short time and moving 100 units a month was the norm. Four years later, he decided to buy the company outright. With locations in Wisconsin, Dallas and Oklahoma, he sold it off to an associate when the challenge waned.

It seemed meeting number goals was never enough. Sapped at being his own boss for so long, he decided to work at Wisconsin-based Aquafinance, a lending house that specialized in helping the water industry with financing. Eventually, he found himself heading up Aquafinance’s operation in Puerto Rico. Things were looking up—so well, in fact, that he decided to have a home built back in Wausau, Wisc.

What was I thinkin’
One day, as he readied for work, Hibbs stepped outside. “It got to 36 below zero. And I said, ‘This is crazy. When it’s 70 degrees inside the house and there are two inches of ice inside the windows, this is not my place to live.’” So, in 1997, Hibbs packed up and moved to Florida. 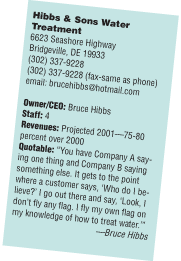 Once in the Sunshine State, he landed a job with the third-largest Culligan owner in the country at the time. Within three months of his arrival, Hibbs started working his magic. Within three months, revenues jumped from $60,000 to $140,000 a month. Business differences ensued and Hibbs left. He then worked for Kinetico for 10 months, and got fed up. After some consulting work, his contact at Aquafinance wanted Hibbs to straighten out the organizational dysfunction at his Texas operation. He promised Hibbs it would take only a few months.

After situating things in Texas, Hibbs moved back to Delaware, where his parents grew up. Accustomed to approaching the water industry from all sorts of angles, he wanted to do something fresh and new. In September 2000, he settled on a plan: “I just did it different. Instead of being full retail—because I had done that for years—I decided on more of a wholesale standpoint. Basically, what I wanted to do was open an Internet site with free water testing.” Hibbs’ idea was to have people send him water samples and he would return a recommendation based on his findings.

Alas, the site never materialized, and Hibbs moved on Plan B. He would collect samples, and then either direct each person to someone in their local area or custom build a system to meet their specifications. To make it worth their while, he offered systems at 50 percent of what other big-name manufacturers would charge. He claims the average markup on any given unit in the industry is 4.3 times the cost.

New kid on the block
Soon, fliers and knocks came to the doors of the residents in and around Bridgeville, Del., announcing a new business in town—Hibbs & Sons Water Treatment. Bridgeville is about an hour south of Dover. The 49-year-old Hibbs is joined by his father, brother and son in the business. He also works closely with Harold Haigh, who owns Waterstill South, a Rohobets, Del., water distribution company. Hibbs claims the best approach to lifetime customers is through “FRN” (friends-relatives-neighbors). Though there’s plenty incentive to expand, he contends the current staff of four is making as much money as his Wisconsin business did with 50 employees.

“In the water business, you can be as little or as big as you want. Bigger is not always better,” he says.

So where does Hibbs get his equipment? He uses an outfit based in Ontario, Calif., for his reverse osmosis (RO) systems, a company in Iowa for chlorination needs and Bill Kavey Water in Palmetto, Fla., for nearly everything else. Delaware is known for its high acid and nitrate levels. In fact, Hibbs says Sussex County has the most concentration of nitrate in the country.

Hibbs says his business’ motto is, “We don’t sell soap, we sell water purification.” Describing the local water as “almost soft,” he uses everything from chlorination to softening resin in treating the problems. With a majority of the water at pH 5.5 or below, he resorts often to an acid neutralizer or RO. 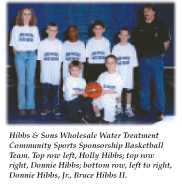 Doctor’s orders
Hibbs equates the water treatment industry to seeing a doctor. “You visit the doctor, get a physical, receive a recommendation, he writes a prescription and you get it filled anywhere,” Hibbs explains. He can offer systems for $1,500 to $2,000 less than well-known brands, but Hibbs does admit one drawback—who will service the system if and when it breaks down? The customer must decide if the initial savings are worth the potential costs down the road. “But if you’re selling the best equipment, there shouldn’t be a lot of service,” he says.

Rentals, often the stabilizing force behind a water treatment business, are relegated to RO units at the company. Hibbs says rentals account for only 3 percent of the business. He says it should be closer to 35 percent, but he has been offering the units interest free for the first year so the Hibbs name can gain greater public exposure.

‘Terrible’ water
Hibbs has seen one major change since he began in the water treatment business 13 years ago. Back then, 60 percent of his business was commercial while the remainder was residential. Now, 85 percent is devoted to residential. With so many problems with the local water, Hibbs says he hasn’t thought much about entering more into the commercial sector. When he asks people how their water is, Hibbs usually gets a one-word answer, “Terrible.”

Many factors contribute to the state’ problems, and Hibbs can rattle them off one by one. Along with nitrate and acidic iron, there’s also the matter of bacterialized iron, which calls for a chlorination process. A lesser-known fact is the entire state averages 50-to-707 pounds of chicken manure per acre. “With the water levels about eight feet away from the surface, people are scared. They would rather have some type of treatment than none at all,” he says. Throw in a great deal of sandy soil and low acidic water, and “reports have hundreds of thousands of fish start dying,” he says.

Water in different states can pose different problems, but so can the business environments of each state. Hibbs has found this out during his travels. In Wisconsin and Florida, it was a dog-eat-dog situation.

Going home again
In Delaware, it’s a case of “old money and old families,” he says. Of course, there are still dealerships of Culligan, Rainsoft, Hague and EcoWater. Family, however, is where Hibbs had an “in.” His father ran a water treatment business in Delaware for 30 years before the son ever entered the picture, so the Hibbs name carries needed validity with the locals. “That makes a difference,” Hibbs admits. Other family members own local businesses in antiques, fuel and vacuum cleaners.

Some may think that smooth entry into the water treatment business was all but handed to Hibbs from his father. That was not the case. After serving in the military for eight years—including a tour of duty in Vietnam—the younger Hibbs went to work for an oil company in Pennsylvania. A rift transpired and Hibbs went back to college and earned a marketing degree. Slowly, he worked his way up to where he is today.

Dreams come true
Hibbs enjoys the slow-paced feel of Delaware, home to Pillsbury, Black & Decker and various oil companies. Being his own boss allows him time to dabble in the budding singing careers of his daughters, ages 13 and 15, who go by the name of Day Dream, an upstart Top 40 duo. In fact, Hibbs owns 33 percent of their record company. The record company named them artist of the month and the teenagers are featured at the website (www.defloentertainemnt.com). The “de” stands for Delaware and “flo” represents Florida, where the girls live.

Visions of teen stars Britney Spears and Christina Aguilera dance in Hibbs’ head. More likely than not, if Day Dream’s career takes off, Hibbs will spend less time at the office and more time traveling with his daughters. Otherwise, he will likely expand the water business. Plans are already set to open an office in Bradenton, Fla., where he is also having a home built.

Conclusion
As he hobbles on his crutches only six days removed from ACL surgery on his right knee (a lasting ailment from Vietnam), Hibbs refuses to allow for 16-20 weeks of recommended rehabilitation. There are too many things to do—a business to run, careers to follow, a family to enjoy. He still remembers what his father told him after he graduated from college: “Bruce, there are two kinds of people in this world—those that work for people and those that work for themselves. You have to take chances.” Hibbs has never forgotten the conversation.

Owner/CEO: Bruce Hibbs
Staff: 4
Revenues: Projected 2001—75-80 percent over 2000
Quotable: “You have Company A saying one thing and Company B saying something else. It gets to the point where a customer says, ‘Who do I believe?’ I go out there and say, ‘Look, I don’t fly any flag. I fly my own flag on my knowledge of how to treat water.”
—Bruce Hibbs