Ion Exchange and Groundwater Cleanup—Dealing with Chromium Contamination in the Northwest, A Case Study

Summary: Even before the subject of hexavalent chromium as a waterborne contaminant was broached in Julia Roberts’ hit movie “Erin Brockovich,” water treatment professionals were aware of the importance of dealing with this problem in drinking water. Here’s a snapshot of options currently available.

In 1995, the U.S. Environmental Protection Agency listed a site in Vancouver, Wash., known as “Boomsnub,” as a Superfund remediation project. This site consists of two parcels 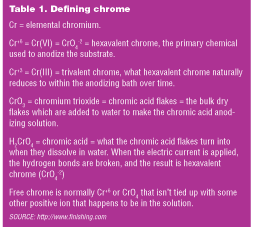 of land, containing two unrelated businesses, each of which contributed separately to soil and groundwater contamination. The Boomsnub Metal Plating facility operated on about a half acre from 1967 to 1994. This facility was responsible for releases of plating wastes, which resulted in contaminated soil and groundwater by heavy metals, predominantly chrome (see Table 1).

Across the street from the plating shop, on approximately four acres, a compressed gas facility operates. Various organic releases at this location have resulted in volatile organic compound (VOCs) contamination of both soil and groundwater.

Boomsnub factors
Migration of these contaminants has resulted in a plume containing both chromium and organics. A pump-and-treat plan has been implemented to treat the contaminated plume. A series of wells was drilled to surround the contamination plume, and by pumping these wells and treating the water, the contaminants are being slowly removed from the groundwater. The VOCs have been controlled with an air stripper/carbon adsorber. To address the chrome contamination, the state of Washington installed in an ordinary weakly basic anion ion exchange system in 1992.

Selecting the right resin
The initial ion exchange process for chromate removal used a weak base anion (WBA) resin. This system—sized to treat the 50 gallons per minute (gpm) flowrate—while effective, was found to be costly to operate due to expensive regeneration. All anion resins readily remove chromates. A WBA resin was selected since it has higher capacity than a strong base anion resin and good selectivity for chromate. During the regeneration cycle, sodium hydroxide is used to remove the chromate from the resin in the form of the sodium salt.

A significant concern with regenerating ion exchange resins in this type of application is that the spent regeneration solution contains high concentrations of the heavy metals—in this case chromium. Disposal of this chrome-containing waste stream must be done in an environmentally acceptable way. This is generally done by conventional pH adjustment and precipitation/filtration technology. Commercial regeneration facilities licensed to regenerate such resin are available, but such services are expensive (see Table 2). 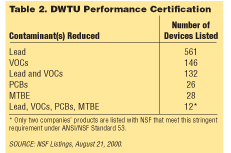 The initial weakly basic anion exchange system was designed for a flow rate of 50 gpm as shown in Figure 1. It consisted of a single 25 cubic foot (ft3) vessel. Typical feed concentrations for chrome were 2-to-6 parts per million (ppm) as chrome. The maximum contaminant limit 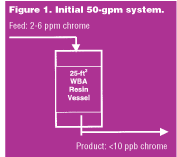 (MCL) for chrome in drinking water has been established by the U.S. Environmental Protection Agency as 100 parts per billion (ppb). The loading obtained with this system was about 2 pounds of chromium per cubic foot (lbs/Cr/ft3) of resin. This corresponded to a treated volume of 2.5 million gallons. Regeneration frequency was therefore on the order of 30-to-40 days.

Chrome selective resin
The initial 50-gpm system operated for about two years, when it was proposed that a specialty chromium selective resin be evaluated for this project.

The chrome selective resin is a specialty anion resin with a targeted functional group. It has a very high capacity and is selective for chromate. The exhaustion capacity of the specialty resin for chromate is more than three times that of the ordinary WBA resins. This means that instead of having a capacity of 2.5 million gallons to exhaustion, the same volume of the chrome selective resin can treat approximately 7.5 million gallons before its capacity is exhausted.

Since placing the chrome selective resin in service, run lengths have increased from 30 to 40 days to more than 90 days. Although the it’s more expensive than an ordinary WBA resin, the significantly higher capacity of the selective allows the system to operate in a one-time use or throwaway mode; that is, the resin is used once and disposed of to an approved landfill for hazardous waste. This avoids the expense of regenerating a resin containing a heavy metal such as chrome. The regeneration of chrome-laden resin is expensive, since the chrome-rich stream produced needs to be treated in an environmentally safe manner.

The system with the chrome selective resin turns out to be less costly to operate even though it’s disposed of after one exchange cycle. Also note that the capacity of the ordinary WBA resin is too low to consider one time use. It would be nearly twice as expensive to use the ordinary weakly basic resin on a one-time use basis than to regenerate this resin.

As a result, a chrome selective resin was recommended and tested. The results were very encouraging. On the basis of these tests, a new larger system was designed and built.

New system
The new ion exchange system was designed to treat a flow rate of 150 gpm. This new system consists of two parallel trains rated at 75 gpm each. One train is shown in Figure 2. Each train contained four beds (21 ft3) of chrome selective resin operated in series. The new system, which was built in the mid-1990s, operates as follows: 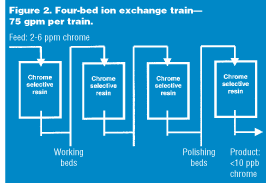 In this way, the beds and the resin are cycled through the plant to achieve extremely high capacity for chrome removal. This system has been in successful operation for about five years. The system is very in removing chrome from the contaminated groundwater. The treated water from this system is discharged to the City of Vancouver POTW.

Conclusion
The use of selective ion exchange resins for removal of heavy metals has been shown to be an economical treatment technique for control of chromate contamination at the Boomsnub Superfund site. This technology would be equally effective for removing other heavy metals including mercury, nickel, zinc and lead. Specialty resins are also available for nitrate and several other specific contaminants.

About the author
Dick Chmielewski is western regional sales manager for ResinTech Inc., of Cherry Hill, N.J. Among the products ResinTech markets is a proprietary chromium selective resin, SIR 700. Chmielewski, who’s based in Carlsbad, Calif., has a bachelor’s degree in chemical engineering from the New Jersey Institute of Technology and a master’s degree in the same subject from the University of California at Berkeley. He has more than 17 years experience in the water treatment industry. He can be contacted at (760)-918-0803 or email: http://dcres@inetworld.net