Consumers need better assurances that the water they’re supplied isn’t tainted with disease-causing contaminants. According to a survey by the Water Quality Association, more than 50 percent of Americans worry about impurities in their tap water. This isn’t surprising since the Center for Disease Control (CDC) estimates that 1 million people in the United States become sick each year from consuming contaminated water.

During a 1994 meeting of the American Academy of Microbiology, it was projected that “water treatment technologies, if adequate, are often not applied, are poorly applied, or are not sufficiently monitored and controlled. Inadequate, interrupted or intermittent treatment has repeatedly been associated with waterborne disease outbreaks.”1 This statement reflects that even the best available technology for water treatment is plagued by failures in the system or improper regulation, monitoring and control. The U.S. Environmental Protection Agency (USEPA) Science Advisory Board concluded in 1990 that drinking water contamination is one of the highest environmental risks to human health.3

Responsive goals
In response to the worsening water quality problem and decrease in consumer confidence, the USEPA has drafted (these may not be set in stone yet) specific milestones as goals to aim for by the year 2005 relating to drinking water quality:2

A status report on the USEPA’s progress in achieving these goals by 2005 is not currently available. And regardless of the improvements in a water system’s ability to treat and provide safe drinking water to consumers, the quality of water supplied is only as good as the quality of its subsequent distribution system. Deteriorated distribution piping allows water to become contaminated in the distribution system. According to a 1997 USEPA report to Congress, significant upgrades and repairs are needed throughout the country (see WC&P, “U.S. Water Infrastructure Needs,” August 1999, p. 76) 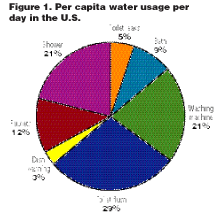 Point-of-use (POU) devices can address the need for improved water quality at the tap. However, the development of effective POU devices requires an understanding of consumer water needs and usage. Figure 1 shows the typical per capita water usage per day in the United States. The majority of water consumption in the household is due to toilet flushes (29 percent), with washing machines and showers utilizing the second largest portion of water use (21 percent each). Water passing through all household faucets comprises 12 percent of the product use. While ingestion of water via drinking, cooking and oral hygiene practices are a significant transmission route for contaminants, other sources such as exposure via bathing and aerosols from showers and toilet flushing may also provide important exposure routes to harmful chemicals and microbes.

How much water do individuals consume each day? Figure 2 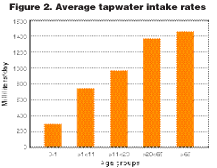 indicates the average tap water intake rates for each age group.4 Infants between the ages of 0-1 consume an average of 302 milliliters (ml) of water per day. Although they consume less water than adults, the effect of contaminants may be more severe due to their small size and under-developed immune systems. The average tap water intake rate increases as individuals age. Persons over 65 drink an average of 1,459 ml per day. This value is slightly less than the value of 2,000 ml—2 L—used by the USEPA to determine risk assessment. Yes, actual consumption is 27 percent less than the USEPA’s figure to calculate risk. Thus, the agency may be overestimating risk in some cases for two reasons: 1) an average is just that and some people may actually consume more, and 2) increasing the value of tap water consumption provides a slight margin of safety for risk analysis. On the other hand, exposure to water in foods and from sources other than the tap also adds to the value of total water consumed per day.

Ground vs. surface water
The National Ground Water Association reports that in 1995, 76.4 billion gallons of water each day were utilized from a groundwater source in the United States from 15 million groundwater wells.5 The percent of the public-supplied population served by groundwater in 1990 was highest in Florida, Mississippi, Nebraska, South Dakota and Idaho, serving 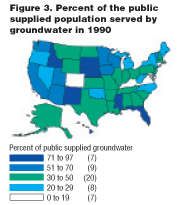 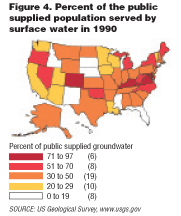 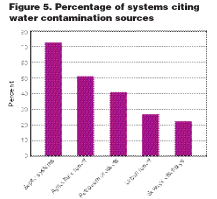 Developing contaminant rules
Amendments to the Safe Drinking Water Act in 1996 require that the USEPA publish a list, known as the Drinking Water Contaminant Candidate List (CCL), of pollutants that aren’t currently regulated as part of the national primary drinking water regulations (NPDWR) but are known or anticipated to occur in public water systems (see www.epa.gov/OGWDW/ccl/cclfs.html). Beginning with 1998, a new CCL is required to be published every five years thereafter.

An initial broad list of more than 300 suspected contaminants was narrowed to a list of 60 priority contaminants. Each contaminant is divided into categories of need for regulatory determinations, research and occurrence. The USEPA will select at least five contaminants from the Regulatory Determination category and determine, by August 2001, if there’s a need for their regulation based on whether a meaningful opportunity is likely to reduce health risk. If deemed necessary, a regulation may not be promulgated until February 2005.

Conclusion
Clearly, many waterborne contaminants are a potential risk to human health that are not yet regulated or monitored. Unpredictable source water conditions, inconsistent treatment efficacy, compromised distribution systems and unrecognized contaminants all contribute to the need for consumers to take control of their drinking water quality. Regardless of your particular demographics, properly maintained POU devices can provide additional measures of safety to the water you consume.