Summary: Recent failures in public water treatment systems and a growing population with suppressed immune systems have increased consumer awareness and demand for point-of-use/point-of-entry (POU/POE) and other commercial devices that protect against harmful waterborne microorganisms. A new emerging technology is now available that will help reduce risk to end-users by mitigating unwanted microbes in a variety of potable and non-potable water supplies, in the United States and abroad.

E. coli outbreaks such as the one in Walkerton, Ontario, which killed at least seven and injured an additional 2,000 people, have diminished the sense of security people once had in the safety of drinking a fresh glass of tap water. Although the vast majority of public water systems deliver “microbiologically safe” water to their consumers, incidental and often undetected contamination does occur. Added to this is an increased understanding of the ill effects microorganisms can have on at-risk individuals such as the elderly, young and those with suppressed immune systems like chemotherapy patients.

Together, these factors and others have created a groundswell of demand for water treatment devices and systems that are effective over a wide range of microbes. While many commercially marketed POU devices, such as countertop and faucet-mount filters, carafes, etc., now include antimicrobial media to address this need, they’re often limited in the range of microorganisms they can control, continuing to leave the consumer potentially at risk from disease causing pathogens.

Innovative technology platform
A new media-based technology developed over the last two years offers alternatives to consumers for achieving the antimicrobial protection they expect, controlling not only a wide range of bacteria and yeasts but viruses as well.

At the heart of the technology is a synthesis methodology involving impregnation of various metal oxides onto an inorganic support resulting in a material with biocidal and bacteriostatic properties. The technology platform allows the synthesis of numerous combinations of known antimicrobial agents—such as copper (Cu), silver (Ag), manganese (Mn), zinc (Zn) and others—with various support materials to create a composition with unique physical and chemical properties, e.g., surface area, porosity, morphology, metal dispersion and metal distributions. Support materials can include numerous substrates such as alumina, silica, carbon, polymers, plastics and other metal oxides. The technology inactivates, reduces and/or exhibits bacteriostatic properties on a variety of bacteria, yeast, algae, and viruses through several modes of action:

Historically, the first application investigated with this new technology was for an industrial reverse osmosis (RO) application, as an in-line pretreatment step for controlling microbes such as Pseudomonas aureginosa. The positive results naturally launched the technology into a host of new applications for potable and recreational water treatment. This particular technology offers some unique features and advantages that differentiate it from other commercially available microbial reduction alternatives employed in water treatment devices and systems, including mechanical filtration (membranes), chlorine and other halogens such as iodine, distillation, and ultraviolet (UV) technology. Among those features:

Demonstrated performance
Research through laboratory testing and field trials has verified the technology’s effectiveness in destroying and/or controlling some of the most challenging disease causing organisms, including those that result in gastroenteritis, pneumonia, cholera, Legionnaire’s disease and Salmonella poisoning. Exceptional results were also achieved in reducing concentrations of pathogenic E. coli H1570 (see Figures 1&2), which has contaminated various food and water sources, infecting and killing many people—most recently in Walkerton, Ontario. 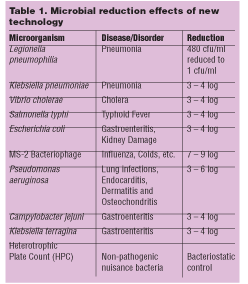 A summary of some performance results on these and other difficult organisms (see Table 1) indicate the technology may have far-reaching effectiveness on a wide range of bacteria as well as viruses. The table summarizes a list of organisms tested in several different applications and relative reductions of those microbes observed in lab, pilot and field demonstrations. The lab tests presented in Table 1 were performed at several locations, including Spectrum Labs in Brighton, Minn., the University of Arizona in Tucson and labs in Atlanta. 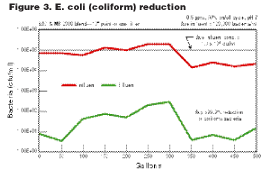 antimicrobial media and granular activated carbon (GAC) into a single device, which is based on a pore structure normally used to achieve cyst removal. The prototype cartridges were tested at Spectrum Labs. Challenge levels of E.coli averaged 1.0×105 colony forming units per milliliter (cfu/ml). The test was conducted at 0.5 gallons per minute (gpm) with a 50 percent on/off cycle for 500 gallons. The results indicated greater than a 99.9 percent bacterial reduction for the duration of the test. It has been shown that bacterial reduction can now be combined with current carbon-based cyst removal technology for enhanced microbial control.

Additional testing proved the technology to be very effective in controlling the MS2 virus (bacteriophage), considered by many to be an excellent surrogate for other pathogenic viruses. The first round of tests, which were conducted by an independent laboratory, reported greater than 7 log reduction of bacterophage similar to MS2. Figure 4 shows a graph of MS2 reduction in a laboratory column test with shorter contact times, where 99.9-to-99.99 percent reduction of MS2 virus was observed. Additional testing at the University of Arizona using pathogenic rotavirus and poliovirus is ongoing, with encouraging results to date. 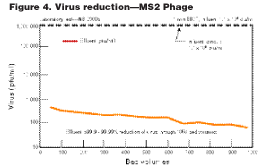 The technology’s bacteriocidal performance has also been successfully demonstrated in a 2-½ month field trial with Legionella bacillus. Because this organism thrives in warm aquatic environments, living inside biofilms, a commercial size Jacuzzi spa was selected as a representative field location. To ensure results couldn’t be attributed to another bacteriocidal agent, all residual chlorine was removed prior to testing. A side stream of the recirculation water was pumped through a standard sump and cartridge combination containing the antimicrobial media. The results showed nearly a complete control of Legionella concentration.

As shown in Table 2, influent concentrations of up to 480 cfu/ml were reduced to less than 1 cfu/ml during the test period. The media’s aggressive performance at higher temperatures suggests this technology could prove effective in similar applications where Legionella often occurs such as showers, cooling towers, and humidification systems. 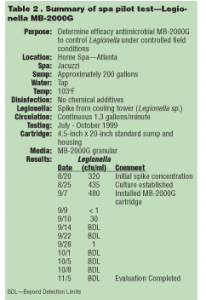 The technology’s bacteriostatic properties were most recently demonstrated in a series of laboratory evaluations using small disposable plastic cartridges. Several media samples were inoculated with known concentrations of E. coli and P. aeruginosa (1.0 x 105 cfu/ml range) and tested under quiescent—or inactive—conditions using separate filters containing E. coli and P. aeruginosa. Two control samples were tested over a 10-day incubation period using a sterilized sand filter inoculated with each separate bacterium. After two days the control samples showed pronounced growth that continued to increase to colonies too numerous to count over the duration of the experiment. The test samples containing the antimicrobial media showed no growth during or after the test was completed. Samples analyzed from three separate cross sections of the filters revealed no bacterial growth throughout the media bed.

Wide range of applications
The variety of products developed from this core technology has broad applicability in helping consumers fulfill their need for safer drinking water, again, both here in the United States and abroad where the existence of reliable water treatment systems are a luxury. Although the primary focus of the technology has been on treating waters of “known microbiological quality” (i.e., deemed to be potable), the products can be an excellent complement to other technologies—such as membrane or ceramic filters and others—to create an “ultimate” microbiological purifier if desired. By that, it’s meant devices that treat water of “unknown microbiological quality.”

The media or combination thereof can be used alone within standard devices and housings or can be customized to create an enhanced product with multiple functionality, depending on the desired claims as shown in the example above. A number of prototypes are being demonstrated commercially for overseas and domestic use. Some specific examples for microbial control in the POU, commercial and recreational markets include:

Although most of the commercial development to date has been oriented toward aqueous applications, the far-reaching effectiveness of the technology indicates that applications outside of the water industry are also possible, including air filtration devices, fabrics, coatings, and manufactured goods.

Conclusion
To meet the increasing water quality challenges of the future, new antimicrobial technologies are required. Backed by over two years of scientific, third-party testing, this technology has proven effective on a wide range of bacteria, yeasts and viruses in both potable and non-potable water treatment applications. The technology’s effectiveness is due to several different chemical and biochemical mechanisms, which allow successful performance in a wide variety of conditions and applications. Ideal for POU applications, this technology can help consumers gain the microbial protection they demand.

About the authors
Martin Jenkins is business development director at Apyron Technologies Inc., an Atlanta company specializing in the development of antimicrobial, heavy metal adsorption and catalytic technologies for water and air treatment applications. He can be reached at (770) 263-1012 or email: mjenkins@apyron.com


Greg Gilles is vice president of applied technology at Apyron Technologies Inc. of Atlanta. He can be reached at (678) 405-2705 or email: gcgilles@apyron.com