Methyl tertiary-butyl ether (MTBE) is the most common oxygenated fuel additive used in reformulated gasoline. Its health effects are not known, but the U.S. Environmental Protection Agency (USEPA) has classified it as a possible carcinogen. If MTBE is present in drinking water, concentrations as low as 2 parts per billion (ppb) can cause odor and taste problems.

The contamination of ground and surface water with MTBE is a rapidly growing problem throughout the United States. Recent media attention has increased public awareness of this problem; consequently, regulations on MTBE in water are becoming more stringent. For example, New York recently proposed lowering the limit for water from 50 ppb to 10 ppb. In California, a new action level of 13 ppb was established earlier this year.

The removal of organics in water that are weakly adsorbed and are present in trace concentrations (low ppb) requires an activated carbon with a predominance of high-energy pores (micropores). Coconut shell activated carbon has traditionally been used for such applications, e.g., removal of trihalomethanes (THM). Coconut char, produced by carbonization of coconut shell, is a better raw material than alternatives (e.g., coal or wood char) for the generation of micropores during the steam activation process.

In addition to isotherm capacity, the retentivity of the carbon for the adsorbate is critical if low effluent concentrations of MTBE are to be maintained. Since MTBE concentrations and background organic concentrations are typically variable, the desorption of MTBE should be considered. It’s widely accepted in the activated carbon industry that coconut shell carbons have higher retentivity than coal-based carbons. 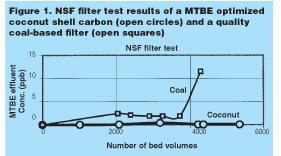 As shown, both filters removed MTBE to non-detect levels (1 ppb based on purge-and-trap gas chromatography and flame ionization detection). The current effluent standard for NSF certification of MTBE removal is 5 ppb. The filter manufactured from coconut shell activated carbon lasted substantially longer, indicating a higher capacity for MTBE. Even after 2,8200 gallons of water was treated, the filter made from the coconut shell carbon reduced MTBE to below 1 ppb, and below reported taste and odor thresholds. The coal-based carbon filter met the current 5 ppb NSF standard for MTBE removal but didn’t last as long as the coconut carbon filter.

The superior performance of high quality coconut shell activated carbon compared to coal-based carbon is in agreement with the recent findings of others.1,2

Lab optimization of carbons
The carbons used in the filters tested above were selected based on a laboratory development program. This program was initiated to optimize both coconut shell and coal-based carbon for MTBE adsorption. The focus was to maximize microporosity; that is, the volume of pores with diameters less than about 20 angstroms (1 angstrom = 10-8 centimeters or 3.937 x 10‑-9 inches). Adsorption theory holds that micropores are required to maximize a carbon’s trace capacity—the capacity to remove trace levels of weakly adsorbed species.

A wide variety of commercial and developmental carbons were evaluated for MTBE removal using an eight8-point isotherm technique based on the ASTM Standard Practice D3860-89a. The carbons included coconut shell carbons and coal-based carbons that were produced from different raw material sources and activated under different process conditions.

Based on the results of the optimization program, a carbon was selected for its capacity for MTBE in POU/POE applications. The carbon is coconut shell based and has a large 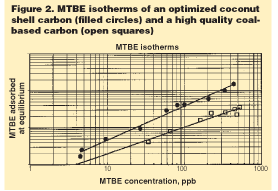 micropore volume, as determined by nitrogen adsorption. Figure 2 shows the equilibrium capacity of this carbon compared to a conventional coal-based carbon. The data shows that the coconut shell carbon, designed for MTBE removal, has a capacity two to three times higher than the coal-based carbon. The coal-based carbon reference is a high-quality carbon that is considered an industry standard for potable water treatment. The absolute capacity of carbon for MTBE depends heavily on other contaminants present in the test water. Therefore, the isotherm plots show relative capacities. Results of filter testing (described above) confirm results of isotherm testing.

Although coconut shell provides an excellent raw material for generating microporosity, the control of the raw material source and activation conditions is critical to assure high MTBE capacity. Figure 3 shows the equilibrium capacities for two other coconut shell carbons: 1) one from a different raw material source, and 2) one produced under different activation conditions. This figure clearly demonstrates the importance of maintaining a well-defined carbon source and a stringent quality assurance program. 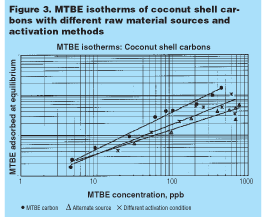 Remediation notes
In remediation applications, water generally contains other organics that are more strongly adsorbed than MTBE. Also, the treatment objectives are usually not as stringent as for POU/POE applications. For these reasons a coal-based carbon or a combination of coal-based and coconut shell carbons are preferred for remediation applications. The coal-based carbon designed for MTBE removal, referenced in Figure 3, has been used in numerous remediation projects. Typically, a series of adsorbers is used, with the upstream adsorber used for heavy organics removal (e.g., BTEX) and the downstream adsorber(s) used for MTBE. If very low effluent concentrations are required, a coconut shell carbon can be used in the final adsorber(s) as a polishing step. 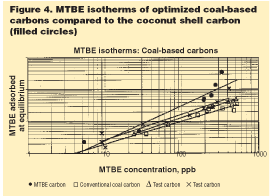 About the author
Mark Stouffer is the technical director for Barnebey Sutcliffe, a division of Waterlink, and is based in Columbus, Ohio. Stouffer holds a bachelor’s degree in chemical engineering from the Virginia Polytechnic Institute. He can be reached at (614) 258-9501, (614) 258-3464 (fax) or email: mstouffer@waterlink.com