Twenty-five years later, Mike Mang recalls with vivid memory playing in his family’s front yard in San Fernando Valley, Calif., as a water truck from his father’s company would drive by en route to delivering water softening tanks to a home. Catching the name on the side of the truck, Mang would tell himself, “That’s where Daddy works.”

Even as he became older, Mang couldn’t escape the water treatment business. It was, after all, in his blood. His grandfather was somewhat of a pioneer in bringing water treatment to southern California when he bought the business in 1964. He had previously worked in the hardware and farming industries.

Foresight to succeed
To this day, Mang remembers people asking his grandfather, “Why do you want Santa Clarita?”—which lies just north of Los Angeles. Little did they know how the state would grow in the following decades. He passed away in 1970, and Mang’s father took over the business. In high school, Mang would spend summers working with his father and uncles as they continued the family business. Often times, his sister and cousin would work alongside him.

Mang, 31, never had any intention of following in his father’s and grandfather’s footsteps, but those summers had a lasting effect. “I got stuck in that rut, and I never left,” he recalled. After high school graduation, he had a job waiting for him. At the outset, he took apart plumbing, made hard water calls, went on routes and later performed installations. He basically did anything that dealt with hands-on labor.

The buyout
Everything ran smoothly until the summer of 1997, when his father, uncles and grandmother sold the business and its 17,000 accounts to Culligan Corp. Mang’s father agreed to sign a five-year, no-compete clause. The younger Mang said his father has no designs in making an industry comeback at this stage in life.

Mang said, “I was really worried because Culligan had always been a competitor of ours and, before you knew it, I was working for them and wearing a Culligan shirt. That didn’t really sit well with me.”

Lighting his own path
His tenure lasted all of three weeks with Culligan. Afterwards, Mang took a week’s vacation and started his own venture into the water world by becoming a manager with Rayne Corp. at its Santa Clarita, Calif.-based operation. Did this move worry Mang, who had no previous management experience? “Let’s put it this way, I didn’t sleep a whole lot the first year,” he said. For the first four months, he worked out of his garage and utilized a storage space for supplies.

The first day of work, he stared at zero accounts. After six months, he hired a couple of salespeople. He made under $60,000 the first year. Today, with a staff of 10 (not including three or four employees at Ventura, Calif.-based Rayne who handle billing duties) and sales expected to exceed $550,000 for 2000 and $1 million for next year, Mang can sleep a little easier. 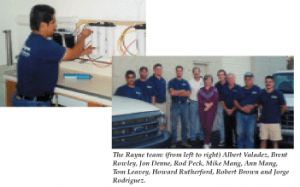 “This is not a very expensive business to get into,” Mang said. “It’s good to have a name like Rayne behind you.” Rayne, incorporated in 1928, owns over 40 operations across the United States—mainly in California, Arizona and Nevada. Most Raynes could be considered “mom and pop” businesses, he added.

David vs. Goliath
As in any market, competition will always bring out the best in each of the participants. And, according to Mang, it also brings out the worst. In a city of over 200,000, Santa Clarita sits 15 miles north of the San Fernando Valley and is known as the home of Six Flags of Magic Mountain. The city also lists 10 water treatment businesses from the smaller operations to the big names like Kinetico, EcoWater and Culligan. But it’s the last that has caused the greatest discomfort for Mang. And the problem has only become worse since Culligan bought his family’s business at the height of when it and USFilter were buying up smaller dealerships in a battle for dominance of the industry.

“What I’ve dealt with in the last three years, I don’t think it can get any worse,” Mang said. “The hard part’s done. Now, it’s just a matter of seeing how big I can grow.” What exactly was the hard part? First, Mang claims he was welcomed to the industry with charges to potential customers that he was a fly-by-nighter.

Then Culligan began offering 12 months free service to anyone with its reverse osmosis (RO) system in what he deemed an attempt to drive him out of business or out of town. At $45 per account, it’s easy to see how this could put a serious dent in a start-up business like Mang’s. He was reduced to telling customers that if anything should go wrong with their Culligan system, he was in the phonebook.

These “scare tactics,” as Mang calls them, only fueled his passion to succeed. “They pushed me to learn how to sell and that motivated me to be more competitive,” he said. “You’ve got to have drive. It’s got to be in your blood.”

Undoubtedly, other businesses haven’t been able to keep up with the stiff competition. In the last three years, Mang said he has seen six or seven water treatment companies pack their bags and head for safer ground.

Family atmosphere
Treating his staff fairly, Mang said, is one of his priorities. He personally trained three of the four salespeople at his dealership. His mother, Ann, currently does administrative duties until he finds someone permanent to hire. He saves the most praise for assistant manager Albert Valadez, who is counted on to be the jack-of-all-trades.

Mang hoped to add another sales representative by the end of 2000 and sees the need likely for at least a couple of part-timers in 2001. Clearly impressed with his performance in such a short time, Rayne has asked Mang to oversee its Glendale, Calif., location, which carries over 900 accounts. Glendale is only 15 minutes south of Santa Clarita. One of his goals is to increase sales to four times its present level within a year.

Still, Mang is happy at his current 2,200-square-foot facility in Valencia, Calif. Within two or three years, though, times may call for a move to a larger location.

Mang still hasn’t forgotten what got him to this point. He still works a 60-hour week and occasionally goes out on installations. He claims, “I can do everything”—speaking about strictly residential business. As financial and manpower resources continue to grow, Mang said he’ll consider targeting the commercial sector. Presently, rental units are a must, he added, as that’s what brings in the recurring income that anchors a dealership. Sixty to 65 percent of products sold are soft water hook-ups while the rest are RO systems.

Emphasis on chloride
Mang deals predominantly with well water. Ninety-eight percent of those belong to the city. The water is drained from underground aquifers 40 to 50 miles away. He requires a lab report before treating an individual well, which can show total suspended or dissolved solids, nitrates or pH levels that are off.

He encounters only a little iron hardness, facing calcium moreso. The solution? Ion exchange, using either potassium chloride or sodium chloride as the regenerant. With salt-regenerating systems under fire in Santa Clarita, portable exchange systems are an ever-growing product. Mang also added that bottled water is an attractive segment he may look into down the road.

Conclusion
“I could never afford to buy out my dad and his brothers with their business,” he said. “But with this opportunity that Rayne Corp. gave me, I have the chance to do it my way. I can build the company the way I want it to be built. I have a family—a wife and two great kids—some obligations. The business is definitely a long run thing for me.”