By Robert A. Governal, Ph.D.

Summary: Municipal water treatment technologies are typically required to handle high peak flows that can exceed the average daily flow by factors of five or more. In this paper, we examine types and sources of these peaks and their impact on innovative wastewater treatment system designs’ capital costs, operational costs and area requirements. This is the third installment of a three-part series that began in February 2000.

Consumers are increasingly relying on point-of-use (POU) and point-of-entry (POE) technologies to improve and ensure the quality of water entering their residences and businesses. Inlet water flows and qualities are typically controlled by municipal or community water treatment plants and the drinking water regulations from which these plants are designed.

In 1995, approximately 58,000 of these community water systems operated in the United States.1 Over half served populations of 500 people or less at a time, one-fourth served between 500 and 3,300 people, and the remainder served over 3,300.

Managing peak flows
Discharge from residences and businesses and collection from storm drains, however, can vary significantly in both flow rate and quality in as little as an hour. A “peak” flow may be simply defined as a sudden and/or sustained increase in the hydraulic and/or contaminant loading into a wastewater treatment plant. Peak flows can be further delineated into “instantaneous” (duration of about one hour), or “sustained” (duration of about 24 hours). Designing wastewater treatment systems to manage extreme peak flows may drastically alter the operation and costs.

Flow upsets can easily exceed the rated average daily flow (estimated at 100-200 gallons per person per day1,4) of a wastewater plant by factors of five or more. Sustained peaks can result from storm events and can be exacerbated by infiltration and inflow into mainline sewers. Storm events may have the general effect of diluting incoming contamination; however, its impact on the types and levels of contamination on a wastewater treatment system is complex and site dependent. In one extreme case, a system normally rated for an average daily flow of 2.1 millions of gallons per day (mgd) experienced sustained peak flows of 20-to­-24 mgd.2 Such extreme system overloading resulted in overflows at more than 24 manholes as well as a costly state mandate to rehabilitate the town’s sewer system within six years.

Issue of contaminants
In addition to flow extremes, contamination extremes may also exceed a wastewater plant’s operational capacity. In a hot desert environment, rapid evaporation during summer months may concentrate sewage far above rated BOD/TSS/NH3—biological oxygen demand/total suspended solids/ammonia—designs. As mass loading increases, detention time in the wastewater treatment plant should be increased to ensure sufficient microbial metabolism and controllable, mixed liquor, suspended solids concentrations.3 If the system has already been constructed, increasing oxygen available for transfer by adding blowers or increasing oxygen transfer efficiency within aeration basins by retrofitting the base system design from coarse to fine bubble diffusers may be alternate options. In cold winter environments, nitrifying bacteria may not have enough metabolic activity to sufficiently break contaminants down within detention times normally specified during equivalent summer months3.

Additionally, many contaminants entering a wastewater treatment plant may not be readily metabolized by existing microbes. Examples of such recalcitrant pollutants4 can include heavy metals, synthetic organics and petroleum hydrocarbons. It can require only a few tablespoons of a RCRA-listed substance—municipal/industrial wastes regulated by the Resource Conservation and Recovery Act—in a wastewater treatment plant to trigger detection by standard gas chromatography and mass spectrometry4 and may result in hazardous discharges into the environment.

Not all peak flows can be related to changes in inlet conditions. In many larger wastewater treatment systems, several unit operations may be designed for parallel flow. Consider a plant designed with four clarifiers and three aeration basins; when one clarifier was removed from service, loading to the remaining clarifiers increased by 8 percent, while loading in the aeration basins increased by 17 percent.5 Reducing the number of operating units results in unbalanced flows; this could lead to an upset in biological and hydraulic equilibrium within the remaining tanks, which results in a loss of product quality and potential discharge of hazardous materials into the environment.

As seen in the following section, peak flow management issues can have a drastic effect on design and operation of a wastewater treatment plant.

This approach resulted in a matrix of designs from which capital costs, operational costs and surface area requirements were determined when the instantaneous and sustained peak flow factors were set to (2.0, 1.5), (3.0, 2.0) and (4.0, 2.5), respectively.

The reference case is based on specifying BOD/TSS/NH3 levels of 250/250/40 mg/L, specifying the base system flow rate to be 0.025 mgd, and setting hourly and sustained peak flow factors to 2.0 and 1.5, respectively. For the base scenario, applicable cost and area ratios shall be assigned values of 1.0, respectively. All other designs will be compared to this base. 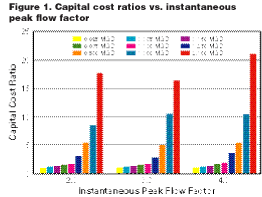 Figure 1 shows the effect of increasing hourly and peak flow rate demands on capital costs of wastewater treatment systems as the ratio increased with increasing flow rate. The first scenario involved application of relatively low peaking factors (2.0, 1.5) toward system design. A comparison of systems’ capital cost ratios was made by increasing hydraulic demand (average daily flow over 24 hours) by factors of two (0.05 mgd), four (0.10 mgd), 10 (0.25 mgd) and 80 (2.0 mgd) over the base scenario. As shown in Figure 1, the systems’ capital cost ratios increased by factors of approximately 1.54, 1.66, 3.11 and 17.88, respectively. When instantaneous and sustained peak flow factors were increased to 3.0 and 2.5, respectively (second set of bars), with designs using flow rates of two, four, 10, and 80 times the base scenario, an increase in capital cost factors to 1.04, 1.32, 2.79, and 16.59 was observed. Note the higher peak flow factor requirement resulted in a more affordable system per gallon of water treated for this scenario.

Continuing to increase the instantaneous and sustained peak flow factors to 4.0 and 3.0, respectively (third set of bars), and using similar flow rates resulted in designs with capital cost increases of 1.04, 1.32, 1.91, and 21.33, respectively. 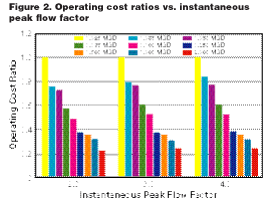 Figure 2 displays the effect of increasing instantaneous and sustained peaking factors on the operating cost of a sequential oxidation wastewater treatment system. Again, the operating cost factor of the base design is set to 1.0 using the parameters described above.

As shown in the first set of bars, increasing the hydraulic loading by these same factors resulted in decreasing operating cost ratios to factors of 0.73, 0.48, 0.37, and 0.21, respectively, when compared to the base scenario. 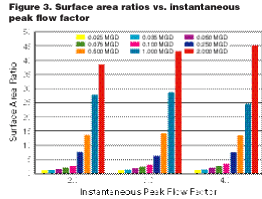 Figure 3 shows how much land may be required for a wastewater plant as a function of increasing peak demand and increasing flow rate.

Conclusion
This study has presented the impact of increased instantaneous and sustained peak flow factors on the design and economics of a sequential oxidation wastewater treatment plant. Capital costs, operational costs, and surface area requirements per gallon of treated water followed a complex relationship; it can be derived from a component optimization mechanism, as opposed to a simple linear progression.

This three-paper series has also served to introduce the reader to advanced wastewater treatment design and economics using the sequential oxidation technology. Future work may include the presentation of operational experience and cost of ownership from wastewater treatment plants designed with the fundamental parameters described.

About the author
Dr. Robert A. Governal is senior marketing manager with CUNO Inc. in Meriden, Conn. Governal earned his doctorate in chemical engineering from the University of Arizona in 1992. This paper was initiated when he was a regional sales manager with Waterlink/Aero-Mod in Manhattan, Kan. He has written over 35 technical papers in the field of water purification technologies. Governal can be reached by at (203) 238-8869, (203) 238-8962 (fax) or email: http://rgovernal@cuno.com