Investing in the Water Industry: Consumer Awareness Leads to Profits

It’s remarkable that something as vital as water could be held to such low value. Most people have no idea where their water comes from, and whether it’s safe. Only in the past few years have people given any meaningful thought to water, but that has tended to be only when water wasn’t available.

In the United States, there are some 55,000 water systems, processing nearly 34 billion gallons of water per day. In addition, there are approximately 23 million private wells in the United States. On a worldwide basis, some 1.4 billion people—or one-quarter of humanity—lack access to safe water. Furthermore, more than 3 million children die each year from avoidable water-related diseases. The water industry, despite our tendency to overlook it, is 40 percent of the size of the oil industry and one-third larger than global pharmaceuticals. Overall, water is a $100 billion industry in America—and growing fast.

Bullish about it
Despite neglect by Wall Street, water has had some fairly spectacular investment success stories. The acquisition of Culligan by USFilter, and then the acquisition of USFilter by Vivendi are two prominent examples. Furthermore, the U.S. water utility industry has been undergoing a dramatic consolidation with several investor-owned companies being acquired. It would appear this is just the beginning and more companies will merge. The size, scope and importance of water offer a phenomenal business and investment opportunity today in the water industry. Water is now being promoted as the 21st century’s oil industry. The need to repair the U.S. water infrastructure is huge. The United States has water infrastructure needs of $1 trillion over the next 20 years. As huge as the U.S. opportunity is, the international water market is estimated to be four to five times the size of the U.S. market.

Under more scrutiny
People are becoming increasingly conscious of their tap water and concerned about what might be in it. Industry statistics show use of home water treatment systems is at an all-time high. Consumers today are unwilling to take water quality for granted. Among the many reasons why people are increasingly more aware is because it’s becoming more expensive. It’s the changing economics of water that’s driving change in the industry. Water prices are expected to rise by as much as two to three times over the next few years, driven by enormous infrastructure repairs required.

The dramatic increase in price expected is because of the huge amount of money that must be spent on water systems. Anticipated price increases will occur because, despite spending by utilities, virtually no expenditures go to adding revenues. In other words, this money doesn’t go to expanding water systems; rather it’s for remedial work. The only way to recover these expenditures is from price increases. Experience tells us price increases tend to bring about conservation measures that will only exacerbate the problem. A few years ago in Southern California, toward the end of six years of drought and following successful campaigns to conserve water, one of the major water suppliers asked for and received approval to increase prices. As the conservation measures took effect, consumption dropped but expenses to operate the utility continued. Thus, with revenues declining, there weren’t sufficient funds to cover the fixed costs. The reward for conserving—the prices went up.

Targets of consolidation
The leaders of the water industry are redefining it. Leading the transformation of the water industry are French and U.S. utilities. Prominent among the participants are American Water Works, California Water Service, Ionics Inc., Osmonics Inc., Pentair and Philadelphia Suburban. Over the past couple of years, U.S. water utilities have been among the hottest takeover targets.

The high cost of maintaining and upgrading the nation’s water and wastewater distribution systems have sparked the industry consolidation. In addition, gas and electric utilities are entering the water industry. Both have begun to acquire water utilities and, even more interesting, water treatment dealers. These changing market conditions and a search for economies of scale are the main reasons why companies are joining forces. The combination and acquisitions have offered significant returns to investors. The pace of mergers is expected to accelerate. In fact, I suspect we’re less than a third of the way through the consolidation phase.

Greater demands
Another factor forcing change in the industry is the customer is demanding more products and better service. Customers today want complete systems rather than components. Customers, as they become more sophisticated, are demanding better after-sales services and often financing from the manufacturers. The water industry today would appear to be where the personal computer industry was 10 years ago. In the early days of computing, primary users were computer buffs who knew how to do programming, understood how to manipulate the data and were aware of how to design computers.

The market didn’t take off until the industry evolved to the point where the user didn’t have to know how the equipment worked, they just needed to sit down and type. The water business is evolving in much the same way. Early on, the water market was made up of buyers who would design systems and suppliers would offer pumps, membranes, filters, etc. Today, the customer wants only to purchase a system and, even more likely, doesn’t care to operate it. They would prefer to hire someone to deal with it. In other words, they want to employ a company to be responsible for the entire range of water issues. The next phase of the water industry will be much more oriented toward complete turnkey operations. 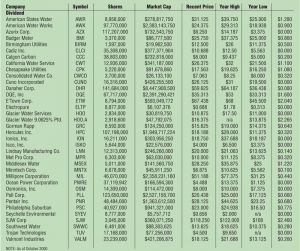 Do it all or perish
The industry—and the role of the water treatment company—is changing. Customers would rather deal with one supplier, or a “one-stop shop,” for all their water treatment needs. They want to avoid the hassles of using multiple companies. That will force manufacturers to offer complete product lines and turnkey solutions and service. Smaller companies unable to provide this service are likely to see their sales decline. These changes are driving industry consolidation. The industry will be left with fewer, but larger, companies that dominate the market.

We’ll see creation of companies that can supply everything from complete systems to service and maintenance. The investment opportunity this introduces is that the smaller, niche-oriented firms are attractive acquisition candidates. It’s vastly easier to acquire a company, which already has a position in the market, than to try to build it from scratch. Furthermore, the valuations of most of the publicly owned companies are at, or near, their annual lows. This makes them exceedingly attractive to buyers.

Changes and progress
Another dramatic development we’ve been seeing is the early stages of a major shift in the delivery and treatment of water. After talking about this for years, we’re beginning to see water utilities offer point-of-use water systems and bottled water. This represents a truly dramatic change in the industry and one that will transform the way customers get their drinking water. The same approach will be true of high-purity water applications. In the future, the utility will be offering complete turnkey water treatment to all water users, whether consumer or commercial/ industrial. In fact, it’s likely water utilities will purchase water treatment equipment manufacturers.

Curiously, with all the changes in the water business as well as the dramatic expansion of products and services, valuations of water companies in the stock market are at record lows. Companies today are two, three and four times the size of a few years ago—and they sell at a mere fraction of the value of a few years ago. Does this suggest the best of the water business is behind us? It has been said the best time to buy, or to get back into the market, is after a correction. When contrasted to other segments of the equity market, the water industry has been in a bear market for several years. Bear markets create fear, uncertainty and a loss of confidence. Yet the opportunities for water treatment companies continue to improve.

Conclusion
It’s clear the next few years will see much change in the water industry. However, these changes represent the prospect of considerable prosperity. The industry will be much different in the way products and services are delivered, but the need for water treatment will continue. In fact, it’s growing larger. For the companies that recognize this titanic shift, the potential is huge.  Ultimately, the stock market values companies based on their records. Those that are consistent growers, with expanding profitability, are the ones with the highest valuations. Given what we expect to see from the water industry, it would appear that the best is yet to come.

About the author
Neil D. Berlant is senior vice president of First Security Van Kasper, a private brokerage firm based in Los Angeles. He is also the founder and managing partner of Water Research Associates. Prior to joining First Security Van Kasper, Berlant was first vice president of investments with Paine Webber Inc. from 1991 to 1999. He has consulted Fortune 500 companies and participated in negotiations concerning mergers, acquisitions and venture capital investments. Berlant, who joins the quarterly “Drinking Water Dollars” column this month as the author for the December and June installments, received his bachelor’s degree in finance from California State University in Los Angeles. He can be reached at (800) 225-8552 ext. 3417, (310) 443-3418 (fax) or email: neilwater@FSVK.com