Summary: One thing will always be true—water is the universal solvent. And understanding the concept of metals dissolution in water is key to not only a broader understanding of corrosion but the basic principles of water chemistry. This is all the more important when considering materials in water treatment equipment, distribution systems and the methods used to link them.

With recent enactment of the new Lead and Copper Rule by the U.S. Environmental Protection Agency (USEPA), which will limit copper to a maximum contaminant level (MCL) of 1.3 milligrams per liter (mg/L) and lead to an action level of 0.3 mg/L and a goal of zero, attention has been focused on understanding the mechanisms of metal dissolution into water. Ground or surface waters don’t often contain copper or lead to any significant level (except for certain geological areas). However, distribution systems occasionally introduce copper and lead into drinking water sources through a process called corrosion from lead-bearing alloys and copper piping. This topic has been written on before in WC&P (see “Solving Blue-Green Water: What It Is and How to Deal with It,” January 2000), but this article focuses more closely on the means of solubility of these and other metals. In so doing, it will touch on more general mechanisms of dissolution.

The majority of elements are metals. Some metals have properties we don’t think of as particularly “metallic,” such as potassium and sodium which are soft and burn in water. Usually when we think of metals we think of gold and silver, iron, copper, aluminum and lead. These are the metals most useful to man.

Other metals are used in processes, such as platinum in catalytic exhaust systems, tungsten in lighting filaments, chromium in stainless steel, zinc in galvanized steel and tin in brass and bronze. Common to all, metals are extracted from the earth as ores and then refined through high temperatures to a pure, molten metal.

Elements are defined by their atomic structure and the ways in which the atoms connect, or how they’re bonded to each other. In many, the bonds are “metallic.” That is they have a low electronegativity that allows electrons in their outer shell to move through the solid. The remaining electrons surround the positive remainders and “hold” the solid together. It’s, in part, this property that makes a metal malleable, as well as a good conductor of heat and electricity. But this also allows it to resist dissolution.

Solvent extraordinaire
Water is often referred to as a “universal solvent.” It’s misleading, however, to consider all materials as equally soluble. We count on the insolubility of many substances—for example, copper or lead. But even so, under certain conditions, copper or lead can dissolve in water and, when they do, this can present problems.

In any given sample of water in contact with—say—copper pipe, we’ll see a complex combination of elements. The copper surface chemistry (which might include oxides, sulfides, chlorides, etc.) as well as chemical makeup of the water itself (which might include oxygen, carbon dioxide, organic acids, microscopic particles of calcite, silica and life forms, etc.) and its resulting properties, all interact to make dissolution of metals more or less likely.

Forecasting corrosion
Predicting whether, or if, a given water matrix will dissolve the copper pipe is difficult and complex. Indeed, while copper and lead do interact with water, it’s relatively rare—or all newer homes would have had evidence of problems.

Applying the science
Scientists have composed some general rules about the solubility of different metals and metal salts. The chart provided here 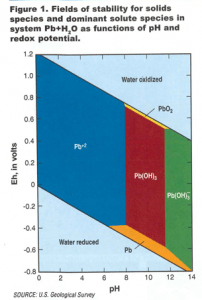 is just a guide (see Figure 1). To perform calculations, however, measures of solubility can be found in different reference books, such as the Handbook of Chemistry and Physics or sources specific to an element. For example, the chart shows copper chloride to be soluble. In the Handbook of Physics and Chemistry, however, a measured solubility index shows that up to 70.6 grams (g) of copper chloride can be dissolved in 100 milliliters (ml) of cold water and 107.9 grams can be dissolved in 100 ml of hot water. The same reference shows ferric (iron) chloride will dissolve up to 74.4 g/100 mL in cold water and 535.7 g/100 mL in hot. This gives us a fixed number to compare solubilities. Thus, while copper chloride and ferric chloride will each dissolve to about 70-75 grams per 100 mL in cold water, five times as much iron chloride can be dissolved in the same volume of hot water than copper chloride.

While our concerns are typically on effects of water on distribution materials, or others that water might come into contact with (cooking vessels for example), the relationships are very complex in natural systems where water is exposed to environmental changes of temperature and dissolved gases. The water also contacts a mixture of different minerals as it moves through the environment. To better understand these relationships, scientists have established graphic phase diagrams. These can be useful in predicting the likelihood for solubility under a certain condition. Most show concentrations against pH, although other relationships are often useful. One typical phase diagram shows the relationship of lead in several forms (see Figure 2). 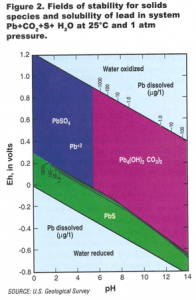 Factors to consider
Other conditions that can affect the solubility of metals include electric potentials, either natural (i.e., during an electric storm) or induced (i.e., in the vicinity of an electric conduit). This effect is well known to pipeline and bridge construction companies where care must be exercised to channel stray currents harmlessly into the ground. In buildings with copper distribution pipe—especially those joined with leaded solder—electrical currents can form a circuit through the water and, thereby, add enough energy to allow surface molecules to form soluble complexes.

Nature of elements
Copper as an element is considered insoluble, as is copper oxide (recall for example the green “patina” of copper roofs); however, copper chlorides (CuCl2) and copper sulfides CuS) are soluble. So, a mechanism that converts the surface of the pipe from elemental (reduced) copper, or oxidized copper, to another form may well permit dissolution. Copper pipe is 99.9 percent copper and fixtures composed of brass are copper alloys that include zinc, tin or other metals. These metals can form intermediates when exposed to certain water matrices that then dissolve.

Although we can’t always specify any particular mechanism, the relationship of microbial growth—especially as bacteria form microscopic concentrations of sulfuric acid, for example—may well explain some instances of copper solvency.

A similar sequence of events may occur for lead. The metal form is insoluble, but salts formed by other reactions may include lead as a compound that are soluble.

Testing to a point
Other mechanisms can also affect the surface of the pipe as well. For instance, if soldering flux (which is a mixture of ammonium and zinc chlorides along with grease and occasionally other materials) is allowed to coat the inside of a pipe, chlorides can be formed with the copper and then dissolved into the water.

Lead in older homes where lead-based solder was used to join pipes can also be affected by soldering flux residue.

Simple contact with water won’t necessarily result in dissolution. Lead may well be in contact with water with no leaching in one instance and with significant leaching in another. There has been a movement toward “zero” in regulating some contaminants and—as appealing as that may seem—the practicality may be remote. Even at one part per trillion of lead in water, there may be 1010 atoms of lead in a liter. Thus, getting to zero is virtually impossible and, even if possible, we could never tell through testing.

Dissolution or not
To further complicate our picture, some atoms may be “stripped” from the surface but, rather than become truly dissolved in water, they may combine with other atoms to form sub-micron particles. Whether these particles—nano-particles of copper oxide for example—are “dissolved” or not is an academic question. While not truly hydrated, they can travel in a water system and can contribute to measurable contamination. Small sub-micron particles aren’t truly in solution but can be ingested into the body or can otherwise contaminate. This is one reason sample bottles for the analysis of metals often include acids. The acid, by contributing additional protons, keeps the metal from forming molecules with oxygen and/or hydroxides.

One of the more important relationships is that of carbon dioxide (CO2) in water. CO2, when dissolved in water, forms a weak acid. It’s this weak acid that’s the dominant determiner of pH in natural water. When we say the solubility of a metal is pH dependent, we’re generally referring to competition between the anions with hydrogen (protons) and the metal—and, more specifically, to the action of the protons against the chemical bonds between the atoms of the metal.

Conclusion
Although most metals used in distribution piping are insoluble, certain chemical and physical processes can slowly cause the metals to release into water. This is a natural process, since formation of a metal ingot from an ore is itself a manmade artificiality.

The slow dissolution of metals into water that resists control is part of a natural geological process. We can make efforts to slow it—or even temporarily reverse it. But ultimately, given geological time, all metal products will return to the natural state of an ore—we’re merely able to use them for a while.

About the author
Larry Henke is technical director at the Robert B. Hill Co. in St. Louis Park, Minn., near Minneapolis. A graduate of the University of Minnesota, he has more than 20 years of experience in the water treatment industry. He’s a member of the American Water Works Association and the National Ground Water Association, as well as WC&P’s Technical Review Committee. Henke can be reached at (612) 925-1444, (612) 925-1471 (fax) or lrhenke@email.msn.com