Editor’s note: Hot or cold, the debate over physical water treatment (PWTs) devices— their efficacy and applicability—rages on. In this issue and the next, we present two perspectives. The first is a “pro” viewpoint from a consultant formerly with Alamo Water Refiners Inc. The “con” position, which follows, is from Kinetico Inc.’s international sales manager. The articles below don’t necessarily reflect the opinion of WC&P or its publisher. The magazine takes no position on this technology other than to say a reliable global standard to evaluate performance of such devices is needed.

Di-Polar Water Treatment—Introduction to a New Method of Water Conditioning
About three years ago, a new water conditioning technology was introduced in Europe from an Austrian company, Best Water Technology (BWT). The approach of this new technology along with the company’s advertisements was its ability to reduce hardness scale without using chemicals or salt. By definition, this type of technology is commonly referred to as a physical water treatment device. A little over a year ago, the company began to market this technology in the United States.

Why is this technology different?
Prior to this point, PWT systems included magnetic, catalytic or inductive (wire coiled over pipe). This new PWT system functions, however, on an electrochemical principle one may refer to as “di-polar.” Historically, problems related to PWT devices—specifically anti-scale magnetic treatment (AMT) units—have been their inability to achieve reproducible results. On the other hand, objective scientific reports note magnetic treatment can reduce scaling under specific conditions of temperature, pH, hardness and flow.1; Reported effects of AMT devices appear to vary widely, possibly reflecting variations in water quality or other conditions, so an apparent lack of reproducible results has tended to undermine their credibility.1 In addition, the physical evidence of a “memory effect” from a magnetic field is dubious.2 That is to say, magnetic treatment devices—within a single pass application—lack scientific evidence of reproducible results of offering conditioned water through immediate treatment by the device itself, much less any lingering aftereffects.

U.S. water treatment companies were already fully aware of controversies surrounding AMT and other PWT water systems. But this new di-polar water conditioning technology was different. Instead of relying on strapped magnets or coiled wires, its fundamental working components include a specialized cartridge with two large flat-surface-area electrodes carrying a 5-30 DC volt (VDC) electrical potential (transformed from 110 AC volt, or VAC) into the feed water stream. The engineering of the new unit also included flow sensors for regulating power influx into the feed stream based on varying flow conditions and water chemistry. Having been familiar with fundamentals of electrochemistry, it was believed this new di-polar technology slightly changed the solubility of hardness within the water. Some initial test results confirmed this possibility.3 It was found that equipment could inhibit calcite scale formation on heating coils 100 feet away, which was contrary to magnetic memory loss as frequently reported by AMT testing.4 Most of all, this product had received positive reproducible test results from independent labs, such as DVGW in Germany and Spectrum Labs in the United States.5

Not to be confused with water softening, a di-polar water conditioner won’t exchange the hardness ions for sodium or potassium. Rather, it prevents scale accumulation by hardness “nucleation”—or suspension with colloidal properties—such that it doesn’t attach to the installation as scale. Some manufacturers of PWT devices have sold their products as a direct or equal comparison to water softening.6 The position of this article is that softening has its benefits as does reverse osmosis (RO), deionization (DI) or electrodeionization (EDI), as well as chemical treatment. A di-polar water conditioning is simply another tool available to the water professional at his or her discretion.

How it works?
Di-polar mechanics include a controlled 5-30 VDC electrical potential directed into the feed stream via a specialized conductive cartridge module. By monitoring water flow rates, the system’s programmable logic controller (PLC) powers voltage up or down, depending on water flow. The positive and negative polarity between the two electrodes is switched on average once every 30 seconds. Switching the polarity serves in keeping the electrodes clean and also supports formation of calcium carbonate nucleation as further explained later in this article. Electrical resistance also is measured across the electrodes to identify a working non-fouled or disconnected cartridge. This acts as a monitor for premature cartridge fouling or a failure in DC circuitry. Commercial cartridge modules are designed for a 215,000-gallon run volume. Residential cartridges will each deliver 100,000 gallons before they must be exchanged.

Throughput
Throughput volumes are based on the worst feed water conditions within manufacturer parameters. LED lamps and LCD displays signals problems with the system. Electrode module size, for all systems, is approximately 24-inches in length × 5-inches in diameter. Cartridge weight is about eight pounds. System flow rate determines number of cartridges required. Residential units will have one cartridge module. The largest commercial system will have five cartridge modules. Each cartridge is rated for 13 gallons per minute (gpm) maximum flow rate. In addition to two graphite flat-bar electrodes, the cartridge encases a mixed bed of conductive and non-conductive media. The exact media makeup is kept confidential. However, visual inspection suggests the properties are similar to large carbon granules and a garnet mix. The cartridge media U.S. equivalent mesh sizes are between six and 12. 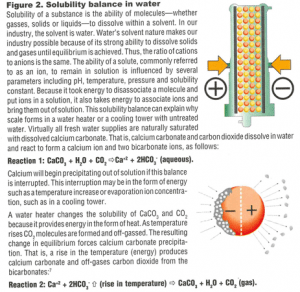 One basic reason why a di-polar water conditioner works is it lowers hardness solubility (see Figure 2) within water by using VDC energy. It does so by migrating and concentrating positively charged calcium ions toward the negatively charged DC powered electrode. It does the same with the negatively charged bicarbonate ions by migrating and concentrating them toward the positively charged electrode. Hydrogen ions disassociate from the bicarbonates and are released into the product stream. Electrode polarities are periodically reversed. Since alike polarity repels one another, the ions previously concentrated are then released. The resulting over-saturation combines to form calcium carbonate crystals. The energy used to create the calcium carbonate is provided in the form of 5-30 VDC electrical energy (see Figure 3).

The disassociation, or separation, of the calcium carbonate from the hydrogen ions can be verified by a very slight change in pH towards acidic. A small amount of dissolved carbon dioxide (CO2 aqueous) is also disassociated and off-gassed, also supporting calcium carbonate crystal formation or nucleation.

The resulting calcium carbonate crystals have a greater affinity for each other than they do for the metal walls of the pipe, heating-coils, fixtures or valves. Lowering of the pH value is slight—varying between 0.10 and 0.25 units, depending on the installation and flow rate. A small percentage of calcium carbonate does precipitate onto the electrodes and eventually builds-up within the cartridge. This is one reason why the cartridge lasts a long time. A slight lowering in effluent electrical conductance when tested after the di-polar unit can also be expected. Test data verifies the difference between electrical conductance from influent vs. effluent of the system is approximately a 0.25-to-1.00 percent.3

The selection and speed of ion migration to each electrode is based on electrical energy, the valence number of the ion and atomic weight of the ion. Typically, ions with a higher valence have a greater selectivity. If valence numbers are equal, the ion with the higher atomic weight takes precedence. This is why the equipment efficiency drops in the presence of higher levels of zinc. Because zinc is a heavier ion that calcium, its “attracted” association with the electrode is greater than that of calcium. In the presence of zinc, the calcium flows through the cartridge without allowing for ion concentration. Testing is presently underway to find ways to increase efficiencies in the presence of zinc and other metals.

Forced nucleation
The di-polar water conditioner forces a change in hardness solubility by concentrating ions. The timed switching of the electrode polarity is crucial in sustaining hardness nucleation. If this timing is too slow, hardness molecules will cluster past the point of suspension and precipitate completely out of solution. Switching the polarity too quickly doesn’t allow ions sufficient time to migrate and force the change in solubility. Electrode reversal time is based on flow rates and water resistance, which typically averages once every 30 seconds.

CaCO3 ion nucleation or “nanocrystals” range in size between 200 and 1,000 molecular weight (MW), according to the manufacturer. Considering the size of one CaCO3 molecule (100 MW), the agglomeration would be between two and 10 molecules in size—comparable to a large aqueous salt that remains in suspension (see Figure 4). The CaCO3 nanocrystal remains constant for days. Eventually, it will completely re-dissolve and revert back to its soluble state. Open-air CO2 assists in re-dissolving the carbonate crystals. Therefore, this technology isn’t recommended for open atmosphere storage tank applications. Closed pressurized storage tanks aren’t a problem.

Where’s the demand?
Any dealer’s own experience confirms a percentage of the U.S. market is reluctant to take advantage of softened water due to reasons that may include salt loading, the “slippery feel” of softened water, higher sodium and/or chloride levels, or environmental concerns. Di-polar water treatment offers scale protection without use of salt or chemicals. Because it has no regeneration waste, it complies with environmental discharge regulations. The up-front cost is higher than water softening but maintenance costs, depending on water hardness and volume used, may be less expensive. When considering salt use, water expense associated with regeneration waste, man-hours for brine tank loading and resin attrition over the years, a di-polar system may be a very well positioned product.9 On the other hand, if the end-user is looking for associated benefits like soap and laundry savings or spot free rinses, then another technology such as softening or RO is recommended. Electrical energy to run a residential di-polar system is 0.055 kilowatt hours per cubic meter of water, which equates to $3 to $6 a year. Cartridge run life depends on water volume use but averages two to three years on small residential installations. Current installations include homes, apartment complexes, hotels, office buildings and production facilities.

Conclusion
Di-polar technology offers non-chemical physical water conditioning. The system has repeatable, scientifically verified results. By lowering solubility of calcium carbonate, the system nucleates ions forcing them to associate with one another rather than heating coils, fixtures or pipes. The technology doesn’t replace water softening in terms of attributes such as soap and laundry savings, but physical methods of water conditioning will continue to grow due to environmental awareness and escalating water costs.

About the author
Bill Herrera is an independent consultant with over 14 years of professional experience in various aspects of the water treatment industry. Formerly the sales and special products director with Alamo Water Refiners Inc. of San Antonio, he holds a bachelor’s degree in industrial technology from Lamar University, Beaumont, Texas. Alamo is a North American distributor of AQA Total®, which is discussed above. Alamo can be reached at (800) 659-8400. Herrera can be reached at (210) 698-7719 or email: http://Bill-Herrera@msn.com

Combining ions to form nucleation or small crystals is still scale. The di-polar water conditioner hasn’t removed them or exchanged them. Yet how do these scale crystals exist and not adhere to the pipe walls or heating elements? Taking a lesson from cooling towers, they work with a term called “zeta potential.” Most particles within water possess a surface charge. The larger the particle, the smaller the surface charge. The zeta potential represents the difference in voltage between the surface charge of the diffusion layer surrounding a colloidal particle and the bulk liquid beyond.8 When a cooling tower operator treats his tower for scale control, his “jar tests” provide him with data to maximize his chemical additive without precipitating the scale out of solution. He’s in fact nucleating the scale towards an equalized zeta potential. Likewise, the di-polar unit will try to maximize the zeta potential of nucleated scale by regulating DC voltage.