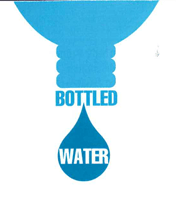 Comedian Dennis Miller—now of Monday Night Football fame—appeared in a recent TV commercial for long distance telephone service where he questions how someone would pay a dollar for a bottle of water. It’s an old joke that even our parents might get.

In the 1970s during the Perrier boom, comedians teased the public about paying money for water at all. It was well received by an older generation that grew up believing American tap water was perfectly fit to drink—and free. But their offspring grew up in a different America. Incidents of contaminated tap water, deteriorating taste and the reality that quality water didn’t necessarily flow freely from our faucets became the common public perception. Although Miller may joke about bottled water, it’s what he drinks at home.

No joke in this bottle
The U.S. bottled water market—with $4.8 billion in sales last year—is no laughing matter. Consumers are drinking more bottled water than ever and the market is growing at a robust 10 percent per year.

But why does the consumer drink bottled water? The market has radically changed in the past few decades. Are those changes a result of consumer awareness, marketing savvy or just plain human evolution? 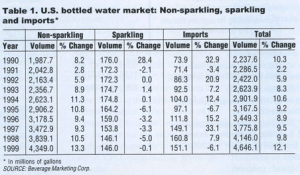 Carbonated bottled water sales were at their peak just before Perrier’s 1990 voluntary worldwide recall after traces of natural benzene were found in sparkling water bottles.1 Although there was no health threat in the product water and Perrier’s handling of the situation was lauded, there has since been a steady decline for carbonated bottled water. Meanwhile, the “still”—non-sparkling or uncarbonated—water category has exploded, especially in convenience-sized bottles. Expanding at over 30 percent per year, water bottled in PET plastic has propelled the industry to new heights. Packaging innovations such as various sports cap styles and wide-mouth and insulated bottles have only added fuel to this aquatic fire.

Domestic & foreign rivals
Even two years ago, performance of leaders like Evian, Poland Spring and Arrowhead would have made most industry observers conclude that for success in the bottled water industry you needed three things: a good spring, low-cost production and good distribution. But, with the recent stellar success of Pepsi Cola’s Aquafina, the spring part of that formula may no longer hold water. Aquafina is processed water made at Pepsi soft drink facilities. Coca-Cola’s Dasani product has jumped onto the processed bottled water bandwagon with a slight twist—adding minerals to the water. This isn’t a new idea. Sparkletts has been selling processed water with added minerals for decades. But when the cola giants put their water products through their gargantuan distribution pipelines, it’s hard not to be successful. And this success has natural spring bottled water marketers scratching their heads. Do springs really matter to the American consumer?

The dilemma springs forth from the roots of ownership of bottled water companies. Nestlé and Danone own many of the major U.S. bottled water brands. These Swiss and French food-and-beverage conglomerates have built their water holdings based on unique, high quality springs. Europeans, Asians and many other nations have a long history, respect and reverence for natural spring waters. But in America, consumers love new products and easy availability, even though they may not completely understand what they’re buying. 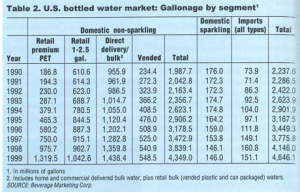 Jim Stevens, former president of the Danone Water Group, believes about 25 percent of U.S. consumers want spring water; the balance don’t care as long as its in a bottle. “Everybody wants a pure water solution. There are people who want better taste while others take it very seriously and want the purest water, other than the Brita-type solution” of pour-through pitchers, he said.

U.S. consumers’ water needs have evolved. Brita-type consumers tend to be younger with less disposable income. For those in their 20s, processed water and inexpensive private labels are popular as well as water packaged in PET containers. Professionals in their 30s and 40s purchase recognized brands, often from spring sources both domestic and imported and are also bigger consumers of home and office 5-gallon water containers. Fixed income consumers revert back to inexpensive water solutions where cost prevails in the decision making process.

Doubting Thomases
John LaPides, president of Snow Valley Water Company, points out, “Consumers want bottled water and generally think of it as spring water but they’re not as concerned as we think they are. We’ve always sold spring water and make a big deal about it, but my guess is that 25 percent of our customers don’t believe it even comes from a spring”.

Still, although a majority drink bottled water because of taste, quality and convenience, 59 percent believe there’s no difference between natural springs and processed bottled water—even though 63 percent say they prefer spring water.

Regional preferences
On the West Coast, the leading brands consumed by respondents were (in order of ranking): Arrowhead, Sparkletts, Crystal Geyser, Dasani, Aquafina, Evian, Deja Blue and grocery store private labels. In the Northeast, bottled waters in order of preference were: Poland Spring, Evian, Naya and America’s Choice. In the South, the leaders were: Ozarka, Evian, Sparkletts, Dasani, store brands and San Pellegrino.

Consumer descriptions for their water’s taste were: 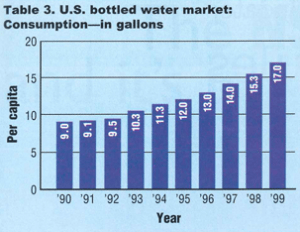 Therefore, is Aquafina better priced than domestic bottled spring water? During a recent price scan at the Vons grocery chain in California, a 1-liter bottle of Aquafina was $0.99 while on the same shelf an Arrowhead Mountain Spring 1-liter was $0.69 and Crystal Geyser 1-liter was $0.59. Dasani was a staggering $1.19 for a liter.

Packaging, leverage & fads
“Packaging has always driven growth in the beverage industry,” said Stevens. He explains that the big growth in bottled water is in the 12-, 24- and 36-packs, which are driven by higher levels of consumption from heavy users. These larger multiples have been seen in the past in the soft drink industry.

The future of the bottled water business is slightly muddied by Aquafina and Dasani. The market is already highly competitive and the current consolidation of brands, such as the acquisition of Naya and Sparkletts by Danone earlier this year, means there’s less room for the smaller producers. With soft drink giants flexing their distribution clout, even larger producers are finding it hard to get shelf space in outlets such as convenience stores, where Aquafina dominates the No. 1 position—as Pepsi leverages its beverage industry clout.

But ultimately, it’s the consumer who dictates what brands will float and which ones will sink. It was only a few years ago that New York Seltzer was the darling of the beverage industry and a formidable threat to the bottled water producers. Yet overnight, the consumers changed their tastes and New York Seltzer disappeared. This isn’t to mention caffeinated and oxygenated bottled water, both of which have faded as fads.

Conclusion
Presentation trends may change. Fads may come and go. But everyone will continue to seek better quality drinking water and bottled water will play a large role in that, showing continued growth over the next decade—all concede.

Information also is still a key ingredient in gaining consumers. Stevens believes the Internet “will be important in an educational role as well as for processing orders, billing and administrative services.” Through communication tools, bottlers can explain their points of differences, the importance of proper hydration and advantageous pricing opportunities.

“Our job is to educate and inform the consumer about water, but it is an arduous journey in which we’ve only taken the first few steps,” said Jane Lazgin, corporate communications director for the Perrier Group. “A generation from now the American consumer may begin to fully understand the true worth of bottled water.”

About the author
Arthur von Weisenberger is a consultant and author of magazine articles and four books on bottled water. He’s developed several websites and has consulted for such beverage companies as Arrowhead, Chippewa Springs, Hawaiian Natural Springs, Poland Springs Water and Ionics Inc. He graduated from Brooks Institute in Santa Barbara, Calif., and is a managing partner at Best Cellars L.L.C., developers of BottledWaterWeb.com. He can be reached at (805) 969-3371, (805) 565-5669 (fax) or email: avw@bottledwaterweb.com