Most felines shy away from water. Tigers, however, have no such aversion. What’s true of the animal kingdom is also increasingly true in the economic realm. Asia’s economic tigers may have lost some of their roar as tumbling stock markets ebbed liquidity and confidence away in 1998, but now the roar is beginning to be heard once again. The tigers are returning to the water.

The original beverage
Any evaluation of the development of global beverage markets in recent years must highlight the growing importance of soft drinks and, within this sector, bottled water. Bottled water has really arrived over the last decade. There are a number of markets around the world in which the tradition of bottled water consumption is well established, if not mature. There are also a number of markets in which demand for bottled water is advancing strongly. In some, this relatively new phenomenon is beginning to take hold with a mix of both convenience sizes and bulk delivery. The world’s leading bottled water companies are already well represented in the Asian Pacific region and have been in the vanguard of both acquisition activity and new brand launches.

Strength in numbers
In 1993, consumption of bottled water in the Asian Pacific region stood at around 5.5 billion liters. See Figure 1 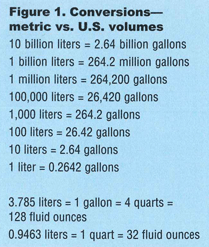 for a conversion guide on this and other metric figures mentioned here. By 1999, it had reached 15.4 billion liters, an advance of roughly 180 percent. By 2003, conservative forecasts put regional consumption at 22 billion liters or more, a fourfold increase in just a decade. Yet, in 1999, average consumption per person across the region stood at less than five liters, against a global average more than three times that level and a Wes 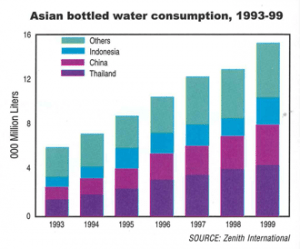 t European average of nearly 90 liters. Last year, intake in some of the higher population markets—China, India and Pakistan—was still below three liters. In the case of the last two, it was less than one liter. Clearly, there’s still immense potential for growth.

Many markets with the strongest bottled water traditions are in Europe, where “taking the waters” is a practice that goes back centuries. If one looks at consumption per person globally, seven of the top 10 markets are in Western Europe. Across the 75 markets assessed in an online database, Asian Pacific markets occupy six of the bottom 10 places by the same criteria.

It’s unlikely Asian consumption will acquire the same character, let alone the same consumption levels as Western Europe any time soon. Indeed, the region has begun to acquire a little character of its own. Bulk water may be important, emulating the Latin American model where large bottles—often of purified water—make up for poor quality or even non-existent municipal supplies. But in most Asian countries, bulk water distribution isn’t yet as sophisticated as in major Latin American markets. In contrast, convenience packaging formats enjoy considerably greater allegiance in Asia—often spring water or, in some cases, mineral water. Affordable water offers the original hydration solution, so necessary in the humid climate experienced across much of the Asian Pacific region.

While bottled water consumption has nearly tripled in the region since 1993, North America has seen over 20 liters added to the average consumption per person to reach more than 53 liters. Convenience formats have been the major driver. In the bulk-dominated Latin American region, the average per person consumption is 43 liters—up by 12 liters. Such levels only offer a context for potential Asian growth. Placed in this wider arena, Asian prospects can’t help but be seen as mouth watering.

Surprise leader
Which is the largest market in the region? Where’s consumption per person highest? It’s the same country, but it’s not one that might readily spring to mind—Thailand. With average 1999 sales of 65 liters per person for a market of 4.1 billion liters, Thailand is the third largest market worldwide after the United States and Mexico. All types of product—mineral, spring, purified—are present, as are all packaging formats (glass bottles, PET bottles, PE bottles, PVC bottles and PC bottles). Almost the entire market is still water. Indeed, sparkling enjoys only a small toehold in all Asian markets.

Thailand is likely to lose its leadership status to China in 2000, which is expected to grow from 3.8 billion liters today to 7 billion liters or more by 2003. As in India, the key will be the ability to establish and exploit distribution. This is a prerequisite for growth that gives a distinct advantage to those global bottled water players already with such a system for convenience channels—such as Coca-Cola, Nestlé and PepsiCo—or which have acquired such prominence through acquisitions, as with regional No. 1 Danone. Other sizeable markets in the region include Indonesia, where Aqua Golden Mississippi, now part of the Danone Group, dominates a market of around 2.4 billion liters; and the Philippines, where the rapid emergence of a “water station” sector—water stores—has already taken demand to 750 million liters.

Soaring popularity
Bottled water sales in India are estimated to have risen eightfold between 1993 and 1999, but at no more than 700 million liters, consumption per person remains well below a liter on average. Australian demand has tripled since 1993, with home and office delivery an important segment. In South Korea, the water station phenomenon witnessed in the Philippines is an already well-established aspect of the market.

In the region’s most sophisticated consumer market, Japan, sales of bottled water have made stately progress to a 1999 level of 850 million liters, but in a crowded marketplace competition with other beverages remains fierce. The real feature of the last three to four years in Japan has been the “near-water” tsunami, a market segment that has grown from nothing in 1997 to as much as 700 million liters in 2000. Adding this to more traditional bottled waters would raise Japanese intake per person to more than 12 liters. Still, this remains low for a developed nation—by Western standards.

Elsewhere, Taiwanese consumption doubled between 1993 and 1999. A Hong Kong market dominated by AS Watson and distilled water nearly emulated this growth. Malaysia saw a quadrupling in consumption. And lately, two more large population markets have begun to show signs of taking off—Vietnam and Pakistan.

Buying power
While perennial French bottled water rivals Danone and Nestlé may be adopting different regional approaches—the former consolidating its leadership with major acquisitions, the latter combining smaller acquisitions with brand launches—one thing is common. They’re both concentrating their efforts in the region’s larger population markets. Danone’s most recent acquisitions have included three in China—Health, Wahaha and Robust—as well as 40 percent of the Aqua Group in Indonesia. The Nestlé Pure Life bottled water brand is now available in Pakistan and Shanghai, with Thailand, India and the Philippines earmarked for rollout this year.

Conclusion
Between 1993 and 1999, volumes sold in the Asian Pacific region accounted for more than one quarter of the near 38 billion liters added to global bottled water consumption. It’s expected the region’s performance over the next three to four years will at least match that. Estimates of market growth are nonetheless relatively cautious. It’s anticipated per capita consumption across the region will remain the lowest globally at around 6.5 liters in 2003. If China were to witness enhanced growth and the bottled water concept took off in India, Pakistan and Vietnam, such predictions could be blown out of the water.

About the author
Jason Holway is research director at Zenith International Ltd, a consultant specializing in beverages and bottled water. He has conducted a number of global studies of drinks and other consumer products markets and is responsible for the company’s latest innovation—a web access database containing worldwide information for all drink categories (including bottled water and water coolers) at http://www.globaldrinks.com. Zenith’s Global Drinks Service (GDS) covers data on all beverage consumption in 75 countries across the globe. Holway can be reached at +44 1225 422050, +44 1225 422982 (fax) or email: jholway@zenithinternational.com