Water in the 21st Century:  Creating Opportunities out of the Challenges

Prominent economic observers, social critics and historians are increasingly turning their attention toward the pressing challenges and issues revolving around the nation’s—and the world’s—supply of clean drinking water. Water is now frequently described in terms such as “the commodity of the 21st century” like oil in the 20th century. It’s deemed the commodity some say will determine the course of human development and economic progress in the future, over which conflicts or even wars may arise, and so on.

Of course, these problems aren’t wholly in the future or imaginary. Water issues have already begun to dominate the politics and economic development of many regions of the western United States. Debates over shared water rights are increasingly the source of conflict between countries. Witness Mid-East peace negotiations between Israel, Syria and the Palestinians. The human health issues and economic challenges of poor drinking water conditions in many less developed countries around the world are well documented. A recent United Nations report estimated that as many as 10 million people a year die as a result of unsanitary drinking water conditions and associated water-borne diseases.

The price of water
On an almost monthly basis, major new demand studies are being released. Each seems to proclaim a more serious future water problem than the last. The past few months have been no exception. For example, the Association of California Water Agencies recently released a new study entitled California’s Looming Water Crisis, which maintains that a quarter million acre-feet of water have already been lost (NOTE: where? how?), and predicts that the next major natural drought could destroy major portions of the state’s heavily agriculture-based economy.

Elsewhere, the National Utility Service predicts water users in the upper Midwest and Northeast could soon be paying more than three times their current rates for drinking water (NOTE: by when?). Both the American Water Works Association—the primary trade organization of the water utility industry—and the Water Environment Federation—a key industry association dealing with water pollution and wastewater issues—have issued studies predicting capital expenditure requirements over the next 20 years in this country totaling hundreds of billions of dollars.

Finally, a report done for the U.S. House Water Resources Subcommittee has completely leapfrogged all recent industry estimates and projected the cost of building, operating and maintaining water and wastewater infrastructure in this country over the next two decades will exceed $2 trillion! This report cites increasing federal mandates and regulatory controls, rising costs of new technology, and a historical reluctance on the part of public decision-makers to reinvest in new infrastructure over the past few decades.

All in all, future spending requirements and the challenges of providing clean water to an expanding population and growing economy just keep getting bigger and bigger. These trends—becoming clearer every day—have in one way or another been responsible for the gradual awakening, realignment and consolidation of the world’s water industry over the past few years. Past columns have discussed and reviewed this massive industry restructuring and the integrated global water firms that are emerging as the dust settles (see Drinking Water Dollars, March 2000 and November 1999), and the realignment of the industry isn’t over yet.

Privatization & powerful players
Although much of the water delivery and wastewater treatment infrastructure in the United States is still in the hands of municipal and other public organizations, the trend is toward rapid privatization of these services. Moreover, water services in much of the rest of the developed world are already managed and/or owned by private companies. The trend towards privatization of services in this country is largely responsible for the acquisition frenzy, which major foreign water companies have entered over the last two years. More generally, the potential opportunities for private firms in helping to help solve these problems and meet this burgeoning demand seem almost limitless.

As any novice investor will fairly quickly note, however, the emerging international water and wastewater services industry is still evolving. It isn’t yet clear who the key future players in this industry will be; and the performance of public companies in this sector seems quite lackluster, relative to all of these challenges and opportunities.

Although rearrangement of the industry is still a work in progress, several key international players are staking their claim. As a result, many well-known household names in the water industry have already started to disappear—U.S. Filter, BetzDearborn, Culligan, Calgon Corp. have all been gobbled up by large foreign consolidators or domestic conglomerates. More recently, firms like Nalco, Recovery Engineering and Aquarion have also disappeared, acquired over the past several months by, respectively, Suez Lyonnaise, Procter and Gamble, and the British water firm Yorkshire, now known as the Kelda Group (an apparent acquisition target as well). Others have been acquired in low-profile transactions in which the new parent organization (such as the Marmon Group) has chosen to remain relatively anonymous.

Investing at your own risk
An obvious question to ask is, given this huge future opportunity and need, why aren’t publicly traded water firms performing better or offering investors a higher return? There are at least a couple of answers to this question.

First, although the challenges and potential financial opportunities presented by the water industry are undeniably huge, the business is still fragmented. The challenges aren’t yet widely understood or appreciated and it’s as yet unclear who the major beneficiaries may be. In short, the winners from an investment perspective haven’t been determined.

Second, and perhaps more important, is the fact water stocks are largely ignored in today’s market. In the current and unprecedented period of economic growth and technology-driven bull market, “low-tech” businesses like drinking water are hard pressed to get much investor attention even though these businesses very well may represent a sounder investment strategy long-term.

Still, the water industry’s time will come. Within the point-of-use/point-of-entry (POU/POE) and water purification sector of this evolving industry, there are a number of investment vehicles, some of which are likely to represent good returns for investors—if not in the short-term, then certainly over the longer-term. The table below summarizes current statistics for several of these players (see Table 1). 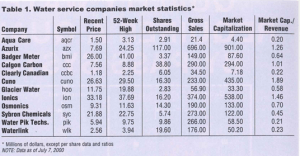 Water Pik Technologies, recently spun off from Allegheny International, is shown here for the first time, and represents perhaps one of the best pure plays in terms of the POU/POE sector of the business. Azurix, the spin-off from Enron that was highly anticipated by the investment community a year ago, continues to languish at less than half of its offering price, with few major developments in the last several months. Calgon Carbon and Osmonics, often mentioned as speculative acquisition targets, have largely completed restructuring to improve performance, though it has hardly been represented in their stock prices.

Elsewhere, Waterlink—one of the “darlings” of the investment community just a few years ago—has decided after years of poor profitability and stock price performance to throw in the towel and seek a buyer. As of mid-June, all eyes were on Vivendi’s impending merger with Seagram and what this may ultimately imply for Vivendi’s large water business and the U.S. initial public offering for Vivendi Environnement, which was delayed for a week after an initial tepid response from institutional investors. In early August, the European Union suspended its regulatory review of the Seagram merger pending submittal of additional information.

Conclusion
In summary, given the huge requirements of this business into the foreseeable future, the water industry will undoubtedly offer investors the potential for huge returns over the long term. Many observers are asking why there aren’t greater returns from the industry yet. At the moment, the industry is still somewhat of an undiscovered gold mine in terms of the investment community, and it remains overshadowed by the frenzy, and perhaps more immediate investment return potential, in the telecommunications and Internet markets. However, some of the companies mentioned above—and various new ones—will emerge to offer the well informed investor high returns into the future. Investors, stay tuned!

About the author
Steve Maxwell is managing director of TechKNOWLEDGEy Strategic Group, a Boulder, Colo.-based management consultant specializing in mergers and acquisitions, and strategic planning services to the water and environmental services business. Maxwell is also editor and publisher of The Environmental Benchmarker and Strategist, an industry newsletter covering competitive and financial developments in the broader environmental services industry. He can be reached at (303) 442-4800.