Summary: This article is the second in a periodic series describing a software program developed to simplify the calculation, graphing and reporting required by the American Society for Testing Materials (ASTM) Standard Test Method D3860 titled, “Practice for Determination of Adsorptive Capacity of Activated Carbon by Aqueous Phase Isotherm Technique.” Granular activated carbon (GAC) adsorption capacity is important for design and operation of liquid-phase GAC process systems in water treatment for potable uses.

Evaluation of sorbent performance at the laboratory scale is important to the water conditioning and purification industry. Laboratory sized testing is a cost-effective practice before conducting pilot and providing commercial- or residential-sized sorbent systems. Having standardized test methods for performance characterizations of activated carbon materials is important. The ASTM committee D-28 is a voluntary group with a mission to establish, approve and publish test methods for making buying decisions. Several of the ASTM methods are designed to obtain information about activated carbon performance. These methods have also been found to be useful for evaluating the

The ASTM Test Method D3860 covers determination of adsorption capacity of activated carbon to remove undesirable constituents from water. The practice can be used to evaluate adsorptive capacity of both virgin (ASTM is now recommending the term “un-used” in place of “virgin,” and “used” in place of “spent” activated carbons) and reactivated GAC and powdered activated carbons (PAC). This test method requires data calculations and graphing on three-cycle log/log probability paper. Personal computers allow easy-to-operate menu driven programs to be developed—increasing staff productivity, among other benefits. A program is described in this article that simplifies data reduction and graphing for ASTM D3860. This program is designed to be compliant with this ASTM method, i.e., it only replaces manual calculations and graphing with a computerized data reduction method. The computerized data interpretation is faster and more accurate. Using the program once typically pays its cost in labor savings.

Jar tests
Jar tests are essentially a single-point isotherm, i.e., a known weight of the sorbent is contacted with the contaminated water sample and a water sample with no sorbent in a second closed jar is used as a “control” to determine sorbent adsorption performance. The control is treated like the sorbent jar test in all regards. Measurements of undesirable constituents in the starting water sample, the jar test after completion and control sample provide a quick performance evaluation and justifies performing a 10-point ASTM isotherm test.

Mini-column tests
Mini-column testing consists of grinding the sorbent and packing it into a small column. Using small particles accelerates the time to obtain equilibration between the particle and contaminated water—the aqueous phase. A high-pressure pump, which can deliver 2,000 pounds per square inch (psi) of pressure, is used to force the contaminated water through the mini-carbon column. Periodically, target compound measurements are made in the influent and column effluent water samples. The appearance of the target compound(s) in the column effluent is called the breakthrough point. The shape of the breakthrough curve is reflective of the mass transfer zone (MTZ) of the adsorbate(s) in the activated carbon column.

ASTM isotherm procedure
The ASTM D3860 10-point isotherm method consists of determination of the adsorptive capacity of activated carbon for adsorbable constituents by contacting the water solution with ground activated carbon, determining the amount of constituents removed and calculating adsorptive capacity from a Freundlich isotherm plot, named after the inventor and shown in Figure 1. Since both GAC and PAC are commercially available, a standard practice is needed to ensure both are evaluated under the same test conditions. This is accomplished by using a specified particle size carbon, i.e., 95 percent passes through a 325-mesh sieve. The test sample is oven dried at 150oC for three hours, using ASTM Test Method D2867, and kept dry in a desiccator until the isotherm is conducted. The isotherm practice is generally performed at 20oC for water applications.

The 10-point isotherm method consists of contacting known weights of activated carbon (ground and dry) with a constant volume of the contaminated water sample. The weights of carbon and sample volumes used are variable, so professional judgment and prior experiences are helpful to make dosage/volume decisions. If you have low concentrations of undersirable contaminant you need to remove, use low carbon dosages—higher concentrations require increased dosages. Most carbon dosages remove 50 ±35 percent of the original adsorbables from the water sample. Analytical measurments have acceptable variation, thus you need to adsorb 50 ±35 percent of starting absorbate, taking most or small amounts of adsorbate out of solution can’t be differentiated because of measurement variations. This removal range for most of the isotherm points allows a useful isotherm to be provided. It’s recommended the original sample be analyzed to determine its chemical constituents and pH. Characterization of qualitative and quantitative constituents in a water sample helps select correct carbon dosages. Synthetic solutions can be made in the laboratory as well as using real-world water samples to conduct ASTM isotherms.

The ASTM recommends (for water containing >100 mg/L of undesirable contaminants) a carbon dosage range of 0.0500-to-20 grams of sorbent be added to nine 500-milliliter (ml) Erlenmeyer flasks. To each flask, 100 ml of water is added with five-minute intervals of addition to each flask, allowing separation of solids and liquids at the end of the contact time (CT) used in the experiment. One flask without activated carbon is used as the control. Increasing carbon dosages in the flasks can result in raising pH. This pH increase by ionizing organic compounds may result in 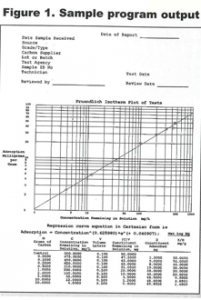 decreased adsorption capacity. The control is used to monitor any loss of adsorbate(s) due to the experimental process. Test and control samples are placed on an agitator in a water bath for 24 hours. A CT study should be performed to verify 24 hours provides the steady-state equilibrium concentration, where no more removal with longer CTs occurs. Immediately after this steady-state CT, each test and control sample is filtered through a separate new 0.40-to-0.45-micron (mm) membrane filter. The filtrates are analyzed immediately for the specific constituent of interest; and results, along with the corresponding carbon weight, are recorded for calculating the results (see Figure 1).

original and final constituent concentrations to execute all required calculations and present the plot. The output consists of the tabular calculations and Freundlich isotherm plot. This plot uses three-cycle log/log paper and graphs concentration remaining in mg/L on the abscissa axis and X/M on the ordinate axis—and then connects the points.

The lowest 0.050-gram carbon dosage removed 5 percent of the original adsorbate and the 20-gram dosage removed 99.2 percent. These two isotherm points aren’t as valuable as those which leave 50 ±35 percent of the original adsorbate in solution at equilibrium, as discussed previously. The reason for doing an isotherm is determination of the sorbent’s ability to remove adsorbate(s) from solution: the relative sorbent dosage to adsorbate(s) is important to obtain an accurate determination. Too much of either (sorbent or adsorbate) results in essentially removing all or none of the adsorbate.

Isotherm data usefulness
The Freundlich isotherm plot can be used to estimate the sorbent’s capacity at different adsorbate original concentrations in the sample. To obtain capacity at a sample concentration, draw a vertical line from the concentration on the abscissa scale to the isotherm plot. The corresponding X/M value at the point of intersection is read from the ordinate, adsorption in milligrams per gram (mg/g) of sorbent. This value represents the ultimate capacity of the carbon for the adsorbate for a single component isotherm. The experimental isotherm line can be extrapolated to accommodate higher initial concentrations on the absicca and X/M values on the ordinate. The 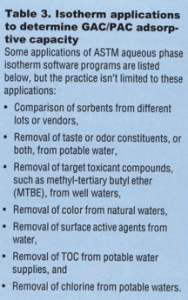 isotherm practice is useful for many applications to determine the adsorptive capacity of activated carbons.

Conclusion
This isotherm software program is the second in our periodic series. The first program was compliant with ASTM’s particle sizing method.2 Additional related software program topics to be the subject of upcoming articles include: aqueous and vapor-phase carbon adsorption predictive software; volatile organic compounds (VOC) predictive carbon adsorption with relative humidity, and physical/chemical compound database. If you know of software on any of the above or other activated carbon topics you would like to see included in this review, feel free to recommend them. We welcome comments about use of computer programs to increase productivity of water treatment systems using activated carbon. Electronic data management and commerce are critical success factors for future business.

About the authors
Dr. Henry Nowicki is chief executive officer of PACS Inc., of Pittsburgh, which provides instrumental and routine analysis on samples for organic and inorganic compound characterizations; sorption services with an emphasis on activated carbon; ASTM laboratory testing; sorption performance using isotherms and mini-columns; R&D on new processes to regenerate used carbons and impregnate unused carbons with chemicals, software programs and training courses; and sponsors the annual International Activated Carbon Conference in September in Pittsburgh. Nowicki is a member of the WC&P Technical Review Committee. He can be contacted at (724) 457-6576, email: HNpacs@aol.com or website: http://members.aol.com/hnpacs/pacs.htm


Wayne Schuliger, P.E., has over 35 years of experience designing and troubleshooting aqueous- and vapor-phase adsorption systems. Schuliger provides a public and on-site PACS short course titled: “Activated Carbon Process Systems: Detailed design and operation of liquid and vapor phase systems.” He’s employed by TIGG Corp., which provides systems developed to use activated carbon and other sorbents to treat air, vapors, water and other liquids. He can be reached at (412) 257-9580.