Mycobacterium— An Overview of Speciation and Incidence in Drinking Water

Summary: Mycobacterium avium complex has proven to be one of the most problematic of opportunistic waterborne pathogens, particularly for HIV/AIDS patients. More recently, it’s been associated with transmission through aerosolized air associated with hot tubs and indoor swimming pools. Detection offers specific challenges and once infected its difficult to completely get rid of it, requiring four antibiotics given simultaneously and sometimes intravenously.

Since the 1930s, water microbiologists have been concerned with microbial growths in drinking water pipelines. These efforts have largely focused on coliform or heterotrophic plate count bacteria, both of which have little direct public health significance. In recent years, research has focused on Mycobacteria and other bacteria that can regrow in treated drinking water and are directly responsible for waterborne disease. M. avium and M. intracellulare have been included in a list of candidate contaminants for possible regulation by the U.S. Environmental Protection Agency (USEPA).17 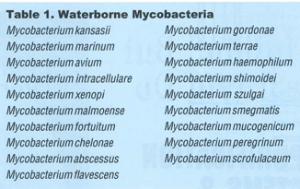 There are a number of environmental Mycobacteria (see Table 1) that can be isolated from soil, house dust, water (wastewater, ground and surface water, and drinking water), poultry and other animals. Many of these organisms are “opportunistic” pathogens and can cause infections in susceptible individuals (i.e., the very young or old or persons with chronic illnesses).

Members of the Mycobacterium avium complex, or MAC (i.e., M. avium and M. intracellulare), are opportunistic human pathogens and can infect the lungs, producing cough, fatigue, weight loss, low-grade fever and night sweats. The greatest increase in MAC infections have been with AIDS patients, where 25-to-50 percent suffer debilitating and life-threatening infections.7,10 MAC can be transmitted through inhalation or ingestion of water, soil or other materials. Evidence for environmental transmission, especially in immunocompromised individuals, include:

Members of MAC are found in natural waters and drinking water distribution. Table 2

summarizes data reported by different authors and demonstrates that drinking water systems can have between 1 and 1,000 colony forming units (CFU) of M. avium per 100 milliliter (ml) of water.

The AWWARF study found M. avium complex organisms (either M. avium or M. intracellulare) in five of six surface water sites in detection ranging from 6-to-35 percent, but the organisms were not detected in any of 106 filtered plant effluent water samples 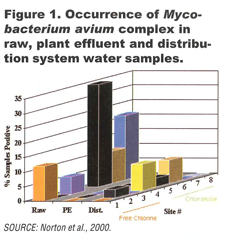 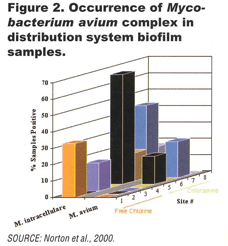 Systems with low chlorine residuals or high assimilable organic carbon levels, which are nutrients for bacterial growth, tended to have more frequent detection of the bacteria. The number of M. avium in drinking water biofilms was low (< 4 CFU/cm²), but M. intracellulare occurred in biofilms up to 2.9 x 103 CFU/cm². DNA fingerprinting studies have shown that single, unique mycobacteria strains can persist as long as 41 months in a water distribution system.18

M. avium strains are highly resistant to chlorine, monochloramine, chlorine dioxide and ozone (see Table 3). Free chlorine contact time (CT 99.9%) values for 3 logs of inactivation for the M. avium strains were 700-to-3,000 times greater than that for E. coli. M. avium are more resistant than Giardia (CT99.9% of 46 mg.min/L at pH 7.0 and 23oC) to free chlorine disinfection, but equal or more sensitive than Giardia to monochloramine, chlorine dioxide and ozone.

In 1986, it was reported in the American Society for Microbiology News2 that M. avium strains from environmental samples (nebulizer reservoirs, ice machines, hot and cold water faucets, toilets, sinks, etc.) in Boston area hospitals were similar to clinical isolates. M. avium strains from infected AIDS patients have been shown to be the same as isolates recovered from water to which the patients were exposed through drinking or bathing.18 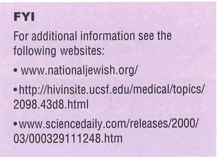 An epidemiological study of 290 homes of HIV patients in San Francisco found MAC in 0.76 percent (4 of 528) of water samples, one of 397 (0.25 percent) of food samples, but 55 percent of 157 soil samples taken from potted plants. Some of the soil isolates were found to be similar to clinical specimens.20

Conclusion
Limited data exist to evaluate the risk of M. avium infection from water. Studies of immunodeficient (SIV-infection) macaques—monkeys—showed that 31 percent became infected within 1,000 days following SIV-infection, and when exposed to drinking water that tested positive for M. avium (44 percent or 11 of 25 samples) with concentrations ranging from 10-to-500 CFU/100 ml.9 Assuming it’s appropriate to extend the analysis from SIV-infected macaques to HIV-infected humans, the data suggest that a third of HIV-infected humans exposed to 10-to-500 CFU/100 ml for long periods (i.e., 1,000 days) might develop M. avium infection. Based on low detection rates (<1 percent) and low densities (<1 CFU/ml) of M. avium isolated from most drinking water systems, it appears that the risk from M. avium in drinking water is low. However, additional research is needed with improved detection methods before a final determination is made regarding the importance of M. avium in drinking water supplies.