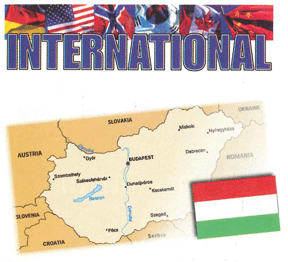 Waterworks of Budapest is the largest and oldest water utility in Hungary, founded in 1868 by the Municipality of Budapest. In 1997, the company was privatized on the basis of a joint venture contract involving French and German companies. Suez Lyonnaise des Eaux (SLdE) and RWE Aqua GmbH acquired a substantial interest in the company’s shares and were given the right to manage the utility—which serves 2.2 million customers with drinking water—for 25 years.

Since 1868, Waterworks of Budapest has constantly increased the capacity and extent of its water production facilities and distribution system in order to satisfy drinking water demands of the rapidly growing Hungarian capital. Increased water demand was interrupted and began to decline because of economic and social changes begun in 1990, i.e., the fall of communism in Eastern Europe. The altered conditions imposed new roles for the operation of the utility.

Effects of tariffs
In the last decade, the transformation to a market-driven economy has dramatically changed drinking water tariffs and consumption in 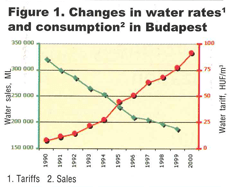 Hungary. In Budapest, an increase of drinking water tariffs—or rates—was tenfold in real value, which was at the root of the significant decline in water consumption (see Figure 1).

Operational changes
The water supply of Budapest is based on bank filtration (whereby deep tubewells draw water after it has percolated through a riverbed), with 764 wells exploiting water from the Danube with a combined nominal capacity of 1,190 million liters per day (ML/day), or 314 million gallons per day (mgd). This system is the largest of its kind in the world. Most wells are situated on two islands—Szentendre Island in the north and Csepel Island in the south—covering 150 kilometers (km) in distance along the Danube (see Figure 2). 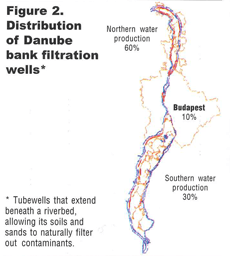 In 1967, a surface water treatment plant was put into operation to cope with the immense water demand, with a peak capacity of 260 ML/day (69 mgd). As the continued water consumption decrease became evident in the ’90s, this additional capacity was no longer needed, and production at the treatment plant was halted in 1995. Current and projected demand can be reliably supplied from the bank filtration wells.

The bank filtration system provides effective natural water treatment. The alluvial structure of the riverbed ensures removal of macro- and micropollutants by a treatment process identical to slow sand filtration. The average two-week filtration time ensures excellent water quality complying with Hungarian and European water quality standards. Turbidity is low (<0.2 NTUs) and the organic micropollutants, such as trihalomethanes (THMs), can be found only in traces (<20 mg/L). Due to past iron (Fe) and manganese (Mn) precipitation in the network, two treatment plants provide for removal in the south (by ozone oxidization and rapid sand filtration). In the north, no additional treatment is needed aside from chlorination.

Budapest has a fairly complex distribution system: the total length of pipes extends for more than 4,600 km (2,875 miles), with 97 pressure zones or areas where boosters pumps might be required. Due to the complexity of the system, a step-by-step approach had to be chosen to address the issue. The utility set up a three-year action program to assess water quality changes in the network, determine the necessity for rechlorination and select the optimal sites for additional chlorine injection if needed.

To select optimal sampling points, hydraulic modeling is used to determine residence time distribution in the network for effective disinfection. Optimal points are selected with assistance of the SLdE CIRSEE Research Center in France. In the sampling point selection process, pipe material and its diameter are taken into account as well as the influence of chlorine decay. Well-defined sampling campaigns measure chlorine concentration, bacterial water quality parameters and parameters that might change during distribution (e.g. Fe, Mn, pH and total organic carbon, or TOC). Chlorine concentration data are used to define chlorine decay constants, test and calibrate the chlorine decay model. The model is refined and validated by additional sampling campaigns. In this manner, the ideal disinfection booster locations are selected. After installation of a chlorine injection pump, effectiveness is further assessed by additional sampling campaigns.

The Budafok experiment
A pilot zone was selected, Budafok—a small town with only one inlet, a 153-km (96-mile) pipeline and output of 12 ML/day (3.2 mgd). The objective was to choose a modestly complex pressure zone in order to become familiar with the applied method. The pilot zone makes it possible to master sampling models, unified sampling campaigns from fire hydrants and chlorine decay modeling, which are new methods at Waterworks of Budapest. 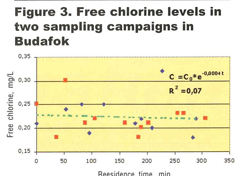 The first results indicate chlorine consumption is very low in the Budafok zone (see Figure 3). This is accounted for by the fact that there’s very low organic matter concentration in the bulk of the water prompting insignificant chlorine decay and that piping in this zone mainly consists of asbestos cement, which doesn’t react with chlorine. All samples were coliform-negative. The maximum heterotrophic plate count (HPC) at 22°C was 10 colony forming units (CFU) per 100 milliliters (ml). As a result, no rechlorination is required in this zone.

This pilot zone experience is being used as a model to extend the project into other pressure zones. The next zones will be chosen based on a higher percentage of bacterial non-compliance and the likelihood of chlorine disappearance. By this graduated approach, the entire distribution system will be evaluated.

The experiences outlined in this paper indicate water utilities have to take special measures to overcome possible water quality deterioration in the distribution system if consumer behavior changes significantly. By the rechlorination project, Waterworks of Budapest will be able to manage drinking water quality in the distribution system, complying with health regulations and consumer expectations. It also will be prepared for further changes in water consumption conditions should those arise.

Acknowledgments
The sampling campaigns were performed by András Bukovszky. Hydraulic and chlorine decay modeling were carried out by Bence Márialigeti. Laurent Kiéné and Philippe Harmant (SLdE CIRSEE Research Center) provided technical assistance for the project. Special thanks to Susanne Homonnay for her support.

About the author
Dr. Gábor Dombay is a water quality expert, and presently works as deputy director for change management at Waterworks of Budapest, Hungary. He holds an M.Sc. CE degree and doctorate from the Technical University of Budapest. He is a member of the International Water Association, American Water Works Association, International Ozone Association and Hungarian Hydrological Association. He can be reached at +36 1 465-2930, +36 1 349-1995 (fax) or email: gdombay@usa.net