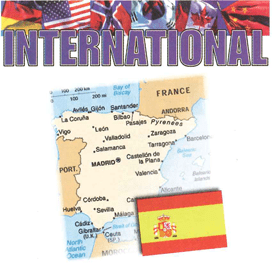 In the water challenged country of Spain, one of the world’s leading water treatment companies has built a new facility for turning seawater into fresh water using a reverse osmosis (RO) membrane with a surface that’s permeable to water but not to molecular contaminants of dissolved salts and other impurities.

The desalination plant produces 10,000 cubic meters of water per day (m3/day)—2.64 million gallons per day (gpd)—in Telde, which is located near Las Palmas, Gran Canaria in the Canary Islands off the coast of Spain and North Africa. The ability to make seawater potable is much needed in Spain, which is host to one of Europe’s more arid climates.

management of water treatment facilities for municipalities and industry—is responsible for the plant in Telde. Telde is one of thousands of towns, including 65 capital cities, around the world whose drinking water is purified by Degremónt. It ranked 14th on the 2000 Worldwide Desalting Plants Inventory of the International Desalination Association with a total capacity of plants supplied at 559,000 m3/day. For a look at the major players in desalination, see Figure 1.

RO and desalination
The membrane technology being employed at Telde is a spiral wound, thin film composite polyamide membrane. It’s 40 inches long and about eight inches in diameter. The product water tube on the inside is just over an inch in diameter. Individual units weigh about 35 pounds. Each membrane can produce 6,000 gallons per day (gpd) with a stabilized salt rejection of 99.6 percent.

The more traditional method of desalination—flash distillation—requires tremendous amounts of energy, which is part of the reason that the largest desalination operations in the world are in the Middle East (where fossil fuel supplies are abundant) or wealthier industrialized nations. With improved technological and production efficiencies and falling costs of membrane desalination, it’s believed its growth will continue to advance in terms of market share.

Membrane technology advantages
The RO process is a preferred method of purification for a number of reasons. While ordinary liquid filters use a screen to separate particles from water streams, an RO system employs a semipermeable membrane that, under pressure, separates an extremely high percentage of unwanted contaminants. Combined with pretreatment of the source water at the site, the result is a very pure source of water for people and industry in the Canary Islands.

RO employs a fundamental scientific principle. Dissimilar liquids will try to reach the same concentration of materials on both sides of the membrane. The only way for this to happen is for purified water to pass through the membrane to the salt side in an attempt to reach equilibrium, called osmosis. Since the goal is to remove salt from the water, it’s necessary to reverse the natural osmotic flow by forcing the salt water through the membrane in the opposite—or reverse—direction. This is accomplished by applying pressure to the salt water as it’s fed into the system.

While the principles are simple, the RO process cannot go on indefinitely unless steps are taken to ensure the membrane doesn’t become clogged by precipitated salts and other impurities forced against it by the pressurized stream of feed water. To reduce the rate of membrane fouling, this RO system employs crossflow filtration, which allows water to pass through the membrane while the separate flow of concentrate sweeps rejected salts away from the membrane surface.

Pretreatment
A relatively simple pretreatment system—consisting of sand filtration followed by cartridge filtration—is in place at Telde to protect and enhance performance of the heart of the system, the membrane element. The membrane elements used here are constructed with advanced, automated manufacturing technology to ensure uniform production quality and optimum physical tolerances. The elements are made of thin film composite membranes in a spiral wound design. The membrane consists of three layers: an ultra-thin polyamide barrier layer, a microporous polysulphone interlayer and a polyester support web. Critical fastening points on the housings are sonic welded for maximum strength and durability.

In water treatment systems in general—and at Telde, in particular—RO is used in conjunction with other pretreatment methods, which ultimately results in a better quality of water at the end of the process. This includes reduction of suspended solids and colloids through techniques such as clarification and/or filtration. See Figure 2 for a schematic of the system layout. 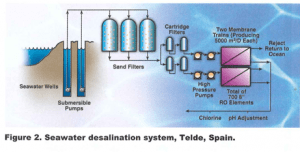 Water conservation
Water is a critical issue in Spain, but particularly in the Canary Islands. The Canary Islands—lying between 29 and 28 degrees latitude—have a subtropical climate. Temperatures are warm and show little seasonal variation. At Las Palmas, for example, the average afternoon temperature in August is 79ºF (26ºC), while in January it only drops to 70ºF (21ºC). Annual precipitation, which is concentrated in January and February, is low, rarely exceeding 10 inches—250 millimeters (mm)—anywhere except on the windward northeastern sides of the islands, where it may reach about 30 inches (750 mm).

During the 1990s, Spain was frequently plagued by drought. The treatment and management of urban water supplies became critical. Approximately 60 percent of all urban wastewater in Spain is purified for re-use. Of this number, 44 percent of the water has secondary treatment and 15 percent has primary treatment, according to the Spanish Ministry of Public Works, in its 1992 Annual Report on the Environment. Primary treatment involves treatment of wastewater to reduce content of BOD5—a class of organic and other contaminants that affect biological oxygen demand (BOD)—by at least 20 percent and suspended solids by at least 50 percent. Secondary treatment involves at least some biological treatment and secondary sediment removal to the standard for “normal” areas. In some regions, mostly in the better-supplied northern provinces, the majority of the water supply is untreated because the quality of the natural water is such that a further treatment isn’t necessary. In Asturias, the Basque country, Galicia, La Rioja, Castilla Leon and Extremadura, over half the populace drinks untreated water. Overall, in Spain, 41 percent of people now drink untreated water. 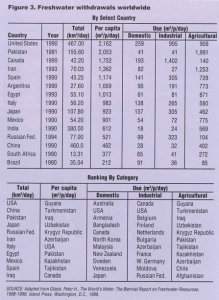 There’s an irony with respect to Spain’s water supply and demand balance. Again, while it has a relatively dry climate—one of the driest for Europe—its per capita consumption is among the highest in the world, exceeded by only the United States and Canada (see Figure 3). A large amount of water is used to irrigate crops, accounting for two-thirds of all usage. This leads to a 1,174 m3/year per capita freshwater withdrawal rate in Spain.

Conclusion
Water consumption in urban areas of Spain is double that of rural areas, although a certain percent of consumption in larger towns and cities is from runoff and losses due to bad plumbing. In a relatively arid climate, it’s not surprising that the need for facilities like the one at Telde is growing. The southeast and southern regions of Spain either already have plants operating like the ones at Denia, Mazarron (1&2) and Cabo de Gata to name a few. There are also some enormous desalination projects being planned now, which include those in Carboneras (120,000 m3/day), Almeria (50,000 m3/day), Alicante (65,000 m3/day) and Cartagena (60,000 m3/day). Thus, the future of desalination in Spain using RO is very promising.

Acknowledgment
The author would like to thank Harold Nicoll, marketing manager Dow Chemical’s Liquid Separation division, for his assistance on the above article. Nicoll can be reached at (800) 447-4369, (517) 832-1465 (fax) or email: hgnicoll@dow.com

About the author
Antonio Casanas is responsible for Dow Chemical’s Liquid Separation division business in Spain and Portugal. He has 11 years experience in water treatment and is a member of the European Desalination Society and the Asociación Española de Desalación y Reuso (AEDyR). He holds an MSC degree in chemical engineering from the University of Las Palmas. He can be reached at email: acasanas@dow.com