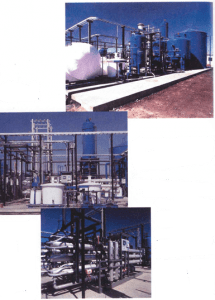 Aguas Industriales Ltda., a family owned firm also known as Aguasin and established in 1961, is one of the oldest water treatment companies in Chile. Reorganized a year ago, it now covers the Chilean water treatment market in four specific areas: equipment and projects, chemical products, sewage treatment plants, and service and plant operation. All four divisions include their own commercial and marketing activities.

The problem
During the last year in Chile, the country has suffered a very strong drought. Here, electrical power is produced mainly hydrologically. With such a narrow nation—with the high Andes mountain chain to one side and the Pacific Ocean to the other—the rivers normally are very short but have a high potential energy. Because of this drought, though, there was no water from the mountains; snow and ice melted and river flows were reduced dramatically. The private electricity generating companies decided to install gas turbines to replace the lower hydroelecric power generation. Gas turbines also use fossil fuels that aren’t environmentally friendly because during the combustion in their chambers, a large amount of nitrogen oxide (NOx)—a major component of air pollution—is produced.

To avoid this NOx pullution, the temperature in the combustion chamber must be reduced by adding water. This water needs to be extremely pure to protect the system from scaling, especially the turbine’s rotors. By using several water treatment technologies, you can produce a high quality demineralized water to be used in these types of gas turbines. The water is immediately converted into steam and the exhaust vented to the atmosphere. This produces an important reduction of NOx in the combustion chamber and generates a greater volume of gas that’s pushed through the turbines, improving their efficiency. The Chilean government’s Enviromental Control Comission authorizes installation of these turbines, but this is done only if they include a dimineralized water plant to inject this water directly into the combustion chambers for NOx emission control.

The challenge
Our company was invited to design and build a water treatment plant that could reach the high quality requested. We received a sample and found out the well water had a quantity of minerals and total dissolved solids (TDS), where iron, and manganese, hardness sulfate and silica appears as the most important components. The required quality, according to gas turbine manufacturers, needed conductivity to be better than 1 microSiemens—or micromhos (µmhos)—less than 0.1 part per million (ppm) of silica and almost no content of heavy metals such as lead and vanadium (<0.001 ppm). To achieve this, a combination of different water treatment technologies and processes was used. Main steps of the plant include: 1) manganese greensand filtration, 2) main storage tank, 3) activated carbon filtration, 4) reverse osmosis (RO) units, 5) stripping tower, 6) transfer tank, and 7) mixed bed demineralizers.

Process description
The almost 900-to-1,000-µmhos water is pumped out of the well and, before going to the storage tank, it’s treated in a 3-meter diameter automatic manganese greensand filter. The pump systems were designed to produce about 65 cubic meters per hour (m3/h) or 264 285 gallons per minute (gpm). The product water is 45 m3/h (198 197 gpm) and the difference—20 m3/h (88 gpm)—are all the discharges such as RO rejection, filter backwash water and ion exchange resin regenerant water. The 1.5 ppm of iron and 0.6 ppm of manganese are taken out and chlorine is added before the main storage tank to avoid biological contamination from bacterial regrowth.

With this first step, we made sure we could eliminate the typically brownish iron precipitate and keep the system stabilized for longer periods without interruption for maintenance. After this first process, water is pumped through three activated carbon filter units 1.5 meters in diameter before passing to two RO units working in parallel. The idea is to make sure no oxidizing agent (such as chlorine and potassium permanganate) goes into the membrane system that might damage the membranes. The flow rate of demineralized water needed for the injection system of the gas turbines was 45 m3/h (197 gpm). Each RO unit is working with 70 75 percent recovery and produces 22.5 m3/h (99 98 gpm) of permeate.

According to the water analysis (see Figure 1) 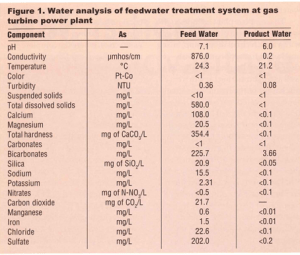 a significant amount of carbon dioxide (CO2) is generated by splitting the bicarbonates in the osmosis process. For this reason, an intermediate tank was designed with a two-section, 1.2-m diameter aeration tower that strips out the CO2 using a counter-current air stream. This tower was loaded with Raschig Pall rings, which are specially manufactured plastic rings used as stripping tower packing media, to increase the transfer area and improve transfer stripping efficiency. The decarbonated water is stored in a 20-m3 (5,280 gallons) transfer tank. In this step, the water quality was between 50-to-100 µmhos and another polishing step was needed.

To reduce conductivity even more, we used ion exchange resins. Two 1.5-m diameter mixed bed vessels were erected as a final step before feeding water into the gas turbines. Both mixed beds worked in a twin alternating sequence. The result—water quality drops below 1 µmhos and all other parameters fall below required values. Each mixed bed produces more than 1,000 m3 (264,000 gallons) of product water between regeneration.

The complete plant includes a CIP system—“clean in place” equipment with a tank, recirculating pump, mixer and heater to prepare chemicals—to clean the membranes periodically, as well as a neutralizing tank to treat all discharges of the manganese greensand, activated carbon backwash flows and effluents of the mixed bed regeneration processes. All these discharges are mixed with the reject water of both RO units. In the neutralizing tank, hydrochloric acid is added and the water recirculated until it reaches a pH of 7. At this point, two pumps empty the tank to prepare it for the next step of discharges. The water is discharged to a river meeting the enviromentally accepted levels of contaminants.

The entire plant is in an area of less than 600 square meters, including the interconnecting piping, transfer and metering pumps and the main control panel. The panel was placed in a 20-foot container to protect the electrical power and control system from rain and sunshine. It includes a panel view screen where the complete plant is reproduced and from where all steps can be controlled, modified and even manually operated. The entire plant was built and erected in a period of less than 90 days.

Conclusion
We believe this plant utilizes a unique sequence of water treatment technologies that solve environmental problems of the gas turbines’ power generation process. We also proved to ourselves that, here in Chile, we could handle the most sophisticated technologies of the world and compete at the same level with foreign companies, with lower costs, shorter lead times, better field service and after-sales support. The same private electric utility has even given our company another contract to build one of the biggest four-step ion exchange demineralizers in the country for similar purposes.

Acknowledgment
The author would like to thank Carlos Kühlenthal, president of Aguasin, for his assistance with this article. This project was carefully controlled by all Aguasin workers that, in one way or another, participated in its successful conclusion in accordance with customer requests and satisfaction. Aguasin’s owner and general manager would like to congratulate all the workers that, in one way or another, contributed to the success of this project.

About the author
Bernhard Illge is Aguasin’s technical and production manager and holds a civil engineering degree in extractive metallurgy from the University of Concepción in Chile. He joined the company 16 years ago and served first as sales manager of a local branch of Aguasin in Concepción, the key industrial city of Chile. After 12 years, he was transfered to the main office in Santiago to become technical manager. He has participated in technical seminars and conferences of water treatment technologies in the United States, Israel, Brazil and Chile. Illge started his career in 1980 with CCU, the biggest Chilean brewery, and has also worked for the regional office of Texaco Inc. He can be reached at (562) 270-9500, fax (562) 738-7684 or email billge@aguasin.cl