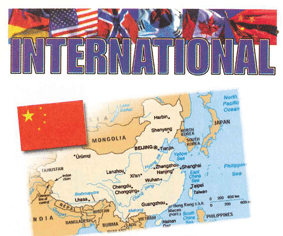 Until the beginning of the 1990s, almost all softeners in China had manual controls. Although locally made multi-port softeners were available, the sales volume for them was very low. Imported automatic softeners have been increasing in the Chinese market since 1993 as the People’s Republic has opened more and more to foreign products. After seven years, these softeners are gradually becoming accepted and welcomed by Chinese customers. The proportion of automatic softeners as a percentage of total softeners sold annually is growing. Many world famous brands, especially American brands, of automatic softeners are now readily available.

This article attempts to give an introduction and analysis of the Chinese automatic softener market, types of current application and some future predictions. It’s hoped this will be helpful to manufacturers and dealers of automatic softeners as well as businesses interested in the Chinese market for water treatment equipment.

State of the market
The main applications for automatic softeners in China are water feed for low-pressure boilers, central air conditioning systems, cooling water systems and various commercial/industrial applications. Automatic softeners haven’t entered into the residential markets because the Chinese standard of living doesn’t yet support this.

Regional characteristics
China can be divided into north and south by the Yangtze River, which flows from west to east. Due to its vast size, China has complex water sources and a large variety of water qualities. However, there are some general geographic

characteristics that can be reported. Table 1 illustrates basic information about water sources, hardness and applications in the north and south of China.

Equipment sizing
Chinese society is organized into “units,” along military lines. Generally, there’s one boiler per organizational unit, which could be an enterprise, an institute, a commercial facility that may have one or more buildings under one name, or a residential apartment block belonging to a “community management unit.” In colder areas of Northern China, almost every commercial building and residential block has its own heating boiler.

Because the pollution caused by numerous small coal-fired boilers is severe, the Chinese government has been promoting a plan to replace small boilers with larger central heating boilers since 1985. Since then, many small boilers were changed to oil- or gas-fired boilers to produce less pollution. The demand for softeners falls mainly in two ranges: 40-60 metric ton per hour (t/h)—176-264 gallons per minute (gpm)—in flow rates for larger boilers and 2-20 t/h (8.8-88 gpm) for smaller boilers. The number of softeners needed for these smaller applications is 4-to-5 times more than the number of softeners for the larger applications.

In China, the quantity of water supplied to a small boiler can fluctuate quite a bit depending upon the application or process, so regular timed regeneration units aren’t a good fit for this market. Demand regenerated softeners are the type most in demand by customers. Timer controlled units are used mainly with air conditioning systems, RO pretreatment and some process water supply. 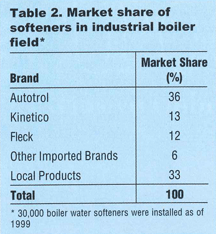 In China, about 70 percent of softeners are used in conjunction with industrial boilers, central heating boilers and air conditioners. Another 30 percent are used for RO pretreatment, commercial applications and process water treatment.

Beijing Jieming Corp., of Beijing, China—which was the first to bring automatic softeners into China—introduced Autotrol control valves to the local market in 1993. Sales expanded quickly. Now, it’s the most well known brand and ranks first in terms of market share. In late 1997, Beijing Jieming began to introduce the Kinetico brand non-electronic units to China. The unique Kinetico characteristics of non-electrical functioning, simplicity and minimum maintenance fit the Chinese market very well, and its market share is growing very fast. In only two years, this brand has grown from zero to second place and continues to evolve.

Local partners
Experience has taught us that in order to distribute imported softeners in China, it’s critical non-Chinese manufacturers find a local partner that’s strong enough to generate sales and provide technical support to customers. The success of Autotrol and Kinetico is typical of that equation. With local promotion by Beijing Jieming both brands were quickly elevated to the No. 1 and 2 positions in the market, respectively.

Equally important are sales policies of non-Chinese manufacturers. Interpersonal trust and respect are crucial between business partners in China. Non-exclusive policies and competing market channels can severely damage the trust a Chinese importer has in a foreign manufacturer. Kinetico serves as an example of how to handle relationships in China well and, because of this, it’s quickly gaining market share.

Examples of poor company policies to avoid include: 1) lack of focus on after sales service; 2) lack of concern for dealer technical abilities; 3) lack of protection and/or exclusivity for dealers and distributors, and 4) direct sales to a distributor’s customers (circumventing distributors).

Increasingly competitive
Today, the Chinese market for water softeners is becoming ever more competitive. In addition to the manufacturers mentioned above, several other U.S. manufacturers have entered or are actively preparing to enter the Chinese market. Manufacturers should make a detailed market survey before entering China and take care to adapt policies to fit the way business is done in this country. Experience has taught us the tough lesson that manufacturers who don’t properly structure their sales channels and who don’t differentiate between distributors and end-users are destined to fail in this market. We’re not familiar with any foreign manufacturer that has been successful in China by selling water treatment equipment directly to end-users. Several companies have tried and are losing market share. Cooperation with a local partner is best.

Future market analysis
The number of boiler units in operation in China—increasing annually by 5 percent—will reach 810,000 by the year 2005. If 80 percent of them were paired with water conditioners and, as we predict, 40 percent of these had automatic controls, there would be 260,000 automatic water softeners installed by the year 2005. Only 30,000 automatic units had been installed in China as of the end of 1999. The coming years will see a big boom in automatic water conditioner unit sales in China.

When considering the market for water treatment equipment in China, manufacturers should also consider the following facts:

Conclusion
The Chinese market holds great potential for companies that manufacture water treatment equipment. Manufacturers should be aware that this market differs greatly from markets in other developed countries and even with those in the region. This article is intended to give manufacturers a brief introduction to our market from the point of view of a local company that has been one of the most successful at building sales of imported water treatment units in China.

About the author
Zhou Heng is sales and marketing manager of Beijing Jieming Corp. of Beijing, China. Jieming is a professional water treatment company that was the first to introduce U.S. automatic softeners into China. It has dealt with several famous brands of softeners including Autotrol, Kinetico and Fleck. Jieming, as a leading supplier of water treatment equipment in China, has developed what many consider to be the best understanding and penetration of this competitive market. Mr. Zhou can be reached at +86 10 6460-6577, +86 10 6467-0081 (fax) or email: [email protected]