RF (radio frequency) technology for level measurement has been in use for a number of years, but recent innovations in instrument designs have made the technique much more adaptable to meet the rigors of plant process control. Utilizing electrical characteristics of a capacitor for level detection, one common method is referred to as “RF capacitance” or simply “RF” level measurement. It’s applicable for detecting the level of liquids, slurries, granular solids or interfaces between different liquids.

Another term used for certain RF systems is “RF admittance,” which is also called “RF impedance,” as defined below. As will be shown, in cases where the material being measured tends to build up a significant coating on the sensing element, this design variation makes it possible for an RF system to continue functioning reliably and accurately. These types, however, still basically employ the capacitance approach.

Note that “radio frequency” is a type of alternating current (AC). For all RF level measurements the range of frequencies is from 30 kilohertz (KHz) to 1 megahertz (MHz).

Knowing system functions
This article briefly covers basic operating principles that can aid the user in understanding and, hence, properly applying RF level control instruments. Knowing how the system functions, by means of probes into the vessel, a prospective user can see that there must be free access to the measured material. Beyond that consideration, the containing vessel or storage tank can be of any construction or shape.

The article also describes how an advanced type of microprocessor-based RF level transmitter-controller can be used in two actual applications pertinent to the water and wastewater treatment fields. These should help a prospective user visualize the flexibility of the instruments in use and benefits that can realized.

Instrument designs are available for measuring process level continuously over the entire vessel height. Alternatively, the instrument can control at one preset point or at a number of selected points along a vessel’s height. The latter types are referred to as “point level control instruments.”

Transmission of the level measurement signal can take several forms, as can the instrument that receives the signal, at a location, which can be local or remote. The transmitter output is 4-to-20 milliamps (mA) DC, plus optional HART Protocol for remote diagnostics, range change, dry calibration, etc. The instrument receiving the signal can be a distributed control system (DCS), a programmable logic controller (PLC), a Pentium III PC, and/or a strip- or circular-chart recorder.

Capacitance theory
Electrical capacitance is the ability to store an electrical charge. As shown in 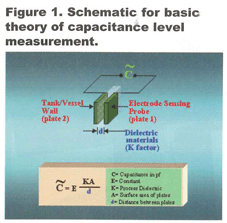 Figure 1, it can exist between two conductors (plates) separated by a distance, “d.” The two plates can be a vessel wall (plate 1) and a measurement probe or electrode (plate 2). The two plates have a nominal surface area, “A”. Between them, in varying distances, is an insulating medium—the material whose level is being measured. For this basic explanation, the material is considered “non-conducting.”

The amount of capacitance is determined by: 1) the spacing and area of the plates, which have fixed values, and 2) the electrical characteristic (dielectric constant, “K”) of the insulating material. The value of K affects the charge storage capacity of the system—the higher the K, the more charge it can build up. Dry air has a K of 1.0. Liquids have values considerably higher: e.g., kerosene is 1.8; mineral oil, 2.1; isopropyl alcohol, 18.3, and pure water, 80. In the case of solids, typically, Teflon has a K of 2.0; sugar, 3.0; sand, 4.0, and Kynar, 8.0.

For the basic arrangement shown in Figure 1, the capacitance, “C” in picofarads (pF), can be calculated from the equation given under the schematic. Applying this formula to a level measuring system, we first assume the process material is insulating (which of course isn’t always 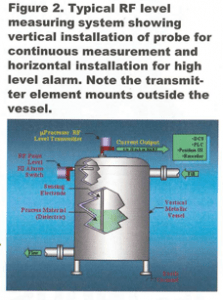 true). A bare, conductive sensing electrode (probe) is inserted down into a tank (see Figure 2) to act as one plate (conductor) of the capacitor. The metal wall of the tank acts as the other. If the tank is non-metallic, a conductive earth ground (shown) must be added to act as the other capacitor plate.

Figure 2 shows the electrode sensor or probe connected directly to an RF level transmitter, mounted outside the tank. In one design, with the probe mounted vertically, the system can be used for continuous level measurement plus simultaneous multi-point level control. Alternatively, for point level measurement, one or more probes can be installed horizontally through the side of the tank. Figure 3 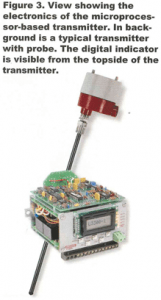 is a photograph showing details of the microprocessor-based transmitter that fits in the housing with its digital indicator facing up.

When the process material is conductive, an insulating sheath (e.g., Teflon or Kynar) is used to cover the sensing probe The insulated probe then acts as one plate of the capacitor and the conductive process material acts as the other. The latter, being conductive, connects electrically to the grounded metallic tank (see Figure 2).

For this application, the insulating media, with a dielectric K, is the probe’s sheath. As the level of conductive process material changes, a proportional change in capacitance occurs. Such a measurement is unaffected by the composition of the process material or changes in its temperature.

Impedance or admittance
The electrical characteristic, “impedance,” enters the picture for further refinements in RF level measurement. In AC circuits, impedance (Z) is defined as the opposition to current flow. An RF impedance type of level sensing instrument measures impedance, which includes capacitance.

The equation for impedance includes resistance, R, as well as capacitance (C). This is important where the process material tends to build up a coating on the level-sensing probe and also is conductive. In such cases (which aren’t uncommon), a significant measurement error can occur. This is because the coating causes the instrument to measure an extra capacitance as well as resistance due to the coating build-up. The result is an incorrect higher indicated level compared to the actual tank level.

Some level measuring systems are referred to as “RF admittance” types. Admittance (A) is defined as the reciprocal of impedance (i.e., A =1/Z). Thus, there’s no basic difference between RF impedance and RF admittance as a level measurement technology. 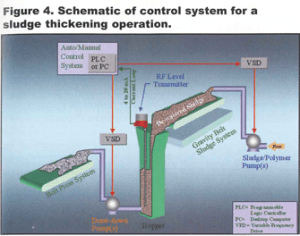 One excellent example of the versatility of an RF level transmitter-controller for process control is illustrated in Figure 4. Pumps on the inlet, at right, feed a gravity belt sludge system that continuously dumps dewatered sludge into a hopper. Pumps on the hopper outlet draw off the dewatered sludge and feed it to a belt press system for further thickening. The RF level instrument has a 15-foot long probe inserted vertically into the hopper and develops a 4-to-20 mA signal proportional to the height of sludge in the hopper. The measuring signal is transmitted to an auto/manual control system (PLC or other device).

The control system is configured to regulate the level in the hopper at around the half-full height. It does so by varying the speeds of the inlet and outlet pumps, through variable speed drives (VSDs). Figure 5 shows an overall view of the processing unit, with hopper for dewatered sludge at left and the belt system inside the compartment at right. 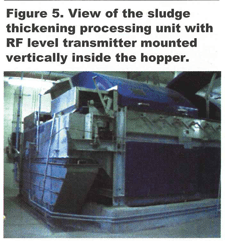 Lead/lag pump control
To equalize the wear on fluid pumps (which can be quite expensive to replace), a scheme called “lead/lag pump control” can be employed. Figure 6 illustrates how a level transmitter with built-in means of switching from one control cycle to another can be used to even out the amount of time each of two pumps 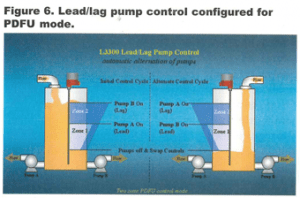 is in operation. The conditions shown in Figure 6 are for a system configured for a “pump-down-fill-up” (PDFU) mode with two zones

With flow coming into the vessel at the top, the level will vary according to the amount of discharge through one or both of two pumps at the bottom. There are three control points involved to maintain desired level within preset limits: 1) the top of Zone 1 where one pump is turned on if the level rises to that point; 2) the top of Zone 2 where the second pump is turned on, to add discharge capacity if the level rises to that higher point, and 3) the bottom of Zone 1 where both pumps are turned off should the level fall to that point. These points are set on the transmitter-controller.

The diagram on the left in Figure 6 shows pump actions for the initial control cycle, which is controlled by a program built into the level transmitter-controller. This cycle lasts a predetermined length of time, during which Pump A (lower left) is the first to be turned on (i.e., is the lead pump) and stays on until the level drops to the bottom of Zone 1. Pump B (lower right) is the second pump to be turned on if necessary and is the lag pump.

Now, looking at the diagram on the right in Figure 6, you’ll note the reversal of the roles of the two pumps. For the duration of this alternate control cycle, Pump B is the lead pump and Pump A is the lag pump.

Another mode of two-zone pump control is where two pumps are used to feed liquid into the tank from the bottom and the fluid being drained by gravity controls the level. This is called a “pump-up-drain-down” (PUDD) system. The level control instrument can regulate pump operation alternatively in a fashion similar to that described for PDFU control.

Conclusion
This article has shown how one type of level measuring method, using RF technology, can be a practical solution to problems encountered in the water and wastewater treatment field. It shows that the prospective user can benefit from proper application of this method, but that it’s not a cure-all for all possible level measuring situations. For automatic control, the method can provide the needed accuracy and reliability to afford all the advantages of such control. Further, in applications where it can reduce wear and tear of equipment, such as pumps, it can save on expensive replacement costs and also provide energy savings during operation.

About the author
Gabor E. Vass is national sales and marketing manager for Princo Instruments Inc., of Southampton, Pa. Gabor has over 24 years of experience in application, design engineering and marketing. He has written many papers on flow, instrument communication protocol and level technologies, and lectured frequently on flow meter technology. He’s a co-inventor of and shares a patent on a magnetic flow meter. He’s a member of the International Society for Measurement and Control (www.ISA.org) and sits on its Field Calibration Technology Committee. Gabor can be reached at (800) 221-9237 or email: info@princoinstruments.com