Summary: Portable exchange deionization (PEDI) regeneration plant wastewater and pH control must be considered an integral part of any PEDI regeneration process. To overlook these functions can be a costly or fatal error. Automation of wastewater control is relatively inexpensive, simple to operate and effective. The paper trail alone generated by a waste treatment computer can be vital in preventing fines, or worse.

Strong chemicals are required for the regeneration of deionizer resins for water purification. Cation resin regeneration requires a strong acid such as sulfuric acid (H2SO4) or hydrochloric acid (HCl). Anion resins are regenerated using caustic soda, either flake or liquid (NaOH). In each case, excess chemical is required to convert resins into the regenerated form.

After the regeneration process is complete, these excess chemicals must be disposed of–usually by going down a city drain. But prior to disposal, they must be neutralized to prevent damage to the drain and conform to local wastewater regulations. Wastewater that contains excess acid (pH below 5-to-6) is very corrosive and can dissolve the sewer piping, leading to expensive repairs. On the other side of the pH scale, excess caustic (pH above 9-to-10) causes problems in the wastewater treatment facility by upsetting the biological digestion of sanitary wastes. If the wastewater is extremely acidic (pH below 2) or basic (pH above 12), the water will cause chemical burns to unprotected flesh and is generally considered a hazardous waste. The financial and legal implications of discharging unneutralized DI wastewater are quite significant.

Self-neutralization
One fortunate characteristic of the strong chemicals used in water purification is that if they’re mixed in the proper proportions they’ll self-neutralize into a harmless salt solution. Sounds simple. But, in practice, it’s not easy to do.

Single tank operation
The theory of single tank operation is to run simultaneous cation (acid) and anion (caustic) regenerations into one tank, effecting self-neutralization. As the two wastewaters continually entered the tank, they would neutralize each other with resultant neutral liquid waste going down the drain. The problem with this setup is that it’s impossible to trim the two flow rates closely enough to be self neutralizing, resulting in wild pH swings during regeneration. This is an extremely unreliable system for any type of continuous operation. Unfortunately, we only found this out after the legal department of the Los Angeles board of public works issued an indictment.

Dual neutralizaiton tanks
Cal Water opened its Santa Ana, Calif. plant, in 1981. Because of the bad experience in our Hollywood plant, where there had been a single 10,000-gallon waste tank, we installed two 20,000-gallon wastewater holding tanks in our Santa Ana plant.

The theory of operation of the dual tank system is to again run simultaneous cation (acid) and anion (caustic) regenerations into one tank, effecting self-neutralization. When one tank was full, the plant wastewater could be switched to the other tank. This gave us the time to mix and neutralize the full tank, prior to putting one drop of wastewater down the drain. Again, sounds great in theory. But every theory can have holes (see Problems).

Neutralization and wastewater disposal took about three man-hours per shift, which worked out to about $20,000 per year. Wasted chemical was estimated to be about another $20,000, so our neutralization cost was upwards of $40,000 a year. All this went on for a number of years until we finally got smart and gave up.

Separate high and low pH tanks
The way we were applying the “self-neutralization” concept simply wasn’t working. Since we had two waste tanks, we decided to separate the low and high pH wastewaters into two different tanks, then neutralize on the run by adjusting the two tank valves as the wastewater went down the drain.

PC vs. PLC
PLCs—process logic controllers—turn things on and off. PCs—personal computers—can turn things on and off, too; but also communicate well with plant personnel. Since the costs were similar, we decided to go the PC route. We purchased an IBM-clone computer, added a Kiethly I/O (input-output) board, installed two 3-inch analog control valves on the waste tanks and spent six weeks on programming and de-bugging.

Graphics screen
Because of our choice of a PC, we wrote the neutralization program with a totally graphic screen (see Figure 1). The wastewater computer screen shows tank levels, valve positions, pH, flow and mode of operation. The program has several pull-down menus that can be used to change set points, calibrate meters and to display and print historical data. All these little features are handy, but most of the time the operating people just click the “GO” button then go about their business. The computer takes care of itself.

Normal computer operation
A start button on the computer screen begins the neutralization and dumping process. When the start button is clicked, both analog valves open halfway. If the pH is higher than the pH set point, the acid valve opens a little and the caustic valve closes a little. If the pH is low, then the acid valve is adjusted down and the caustic valve adjusted up. These corrections continue every eight seconds until the pH of the wastewater is +/- 1 pH unit of the pH set point. This process usually takes less than two minutes (see Figure 2).

From then on, drain pH is monitored by the computer and valve corrections are made as necessary. Once one of the tanks is empty, the computer closes both valves and indicates on the screen that the waste disposal cycle is over.

Over-dosing regenerations
Occasionally we have to overdose a cation or anion regeneration to provide enough of the appropriate pH wastewater to neutralize a preponderance of the other. This doesn’t happen very often since our regenerations are set up to make the net pH of the wastewater coming from the plant approximately 10. But occasionally we will get ahead of ourselves and have to make an adjustment.

When we have had to overdose, about once every six months, we’ve at least used the chemical to increase deionizer capacity and customer satisfaction.

Remote control operation
We use the remote control feature occasionally to adjust flow rates at the beginning of a dump cycle to make up for high concentrations of either acid or caustic waste. This procedure is optional since the computer will have our wastewater neutral within about 2 minutes of startup in worst case scenarios. Doing it manually just speeds up the process.

Manual operation
Several months after we first started up the computer control program, we had to take it off line and perform neutralization on-site manually. This was due to our poor selection of valve manufacturer, rather than any computer or software glitch. Manual adjustment of the two flow rates It turned out to be easy to do. Once the valves are set properly, checking the drain pH about every half hour is sufficient to maintain a legal pH to drain. The only real concern with manual neutralization is labor cost, and the fact that no computer record is kept.

Record keeping
One of the most important things our automated waste treatment system does for us is maintain a record of our daily neutralization activity. Because we automated with a computer instead of a PLC, we are able to maintain, a very user-friendly record of waste flow and pH. The data is stored electronically once a minute—24 hours a day, 7 days a week—and can be done so for many years.

Because all data is stored electronically, we can backtrack to any day and recreate the neutralization activity of that day in a matter of seconds. This information can be presented in tabular or graphic form, on a computer screen or on paper. This available data provides us with our ultimate environmental legal protection.

Automation Cost
The computer we use for wastewater neutralization is an IBM clone that cost $900. The Kiethly I/O board cost $800. Two 3-inch analog butterfly control valves cost about $1,600. The two Signet pH meters and a flow meter cost $1450. The programming cost about $3,200. Total out of pocket was about $8,000. This is about a fifth of what was spent yearly without the computer. Payback was less than three months.
And the results were undeniable (see Successes). 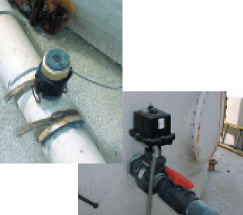 About a year after installing the latest version of the neutralization program, the Orange County Sanitation District relaxed many of the Santa Ana portable exchange tank self-monitoring requirements. They seemed to feel that it was being done daily anyway—which is true.

Conclusion
There are many possible ways to neutralize PEDI wastewater that have been used by various companies in the deionization service exchange business. The method that we use at Cal Water has evolved over time into a reliable and inexpensive process that well suits our needs.


Problems
While the idea of simultaneous regenerations for self-neutralization is great in theory, it suffers from some practical problems: