North America and Europe have different views on drinking water, and we see the first impact of this cultural divergence in water consumption as it relates to bottled water and the water cooler vs. residential small systems in Europe. Keep in mind, it has only been recently with changes in regulations that drinking water treatment devices have become more popular across the Atlantic.

Between these continents, the perspective toward bottled water is different, particularly delivered via coolers (see Figure 1).

Why do European people drink more bottled water than North Americans? To answer this question, we should ask ourselves what’s the relationship of this statistic to land mass, water supply and population. For instance, North America has about 19 million square kilometers (km2) of land area3 while Europe has 10.5 million km2. The population in North America is 400 million compared to 700 million people Europe. That means there’s about twice as many people, roughly speaking, in Europe for half the area.

Another thing, fresh water isn’t equally dispatched throughout the world.

With burgeoning populations in other areas of the globe, water will be the big problem of this new century. More people means more pollution. In 25 years, it’s estimated that 30-to-40 percent of the planet’s populace won’t have enough water. People will use more and more bottled water for personal use and/or water treatment devices in their homes because of decreasing water quality and increasing health concerns. The price of municipal water will increase because laws will become tougher for wastewater treatment as we’re forced to reuse and recycle supplies to stretch them farther. That will again help consumers to seek alternatives, such as bottled water. After all, if you’re at a restaurant and you know the water coming from the tap that the waiter or waitress is likely to fill your glass with is recycled water, wouldn’t you naturally incline toward bottled refreshment.

In North America, there’s more water per person than in Europe and they use more water because of the general perception until only recently that this resource is never-ending. Europeans know there’s a finite supply of water and the more the supply is used the harder it becomes to treat, the more expensive it becomes and—some argue—the less healthy it is to consume, i.e., the idea that removing minerals from drinking water deprives the body of a valuable source of nutrients. That’s why many people in Europe don’t drink tap water and prefer a natural water source for their bottled water.

“The three key reasons why bottled water is growing so quickly and becoming a mainstream beverage alternative in North America, like ready-to-drink teas, soft drinks, etc., are taste preference, convenience of ‘on-the-go’ packaging and confidence in the quality of bottled water. Most of our products, like Evian, are consumed out of the home or office, so in no way can Evian be considered a tap water replacement. This may not be the case for bulk or jug water, most of which is consumed in the home or the office,” said Michael Neuwirth, corporate communications director for Evian Natural Spring Water in North America in Stamford, Conn.

“In Europe, it’s more likely for consumers to drink a specific brand of bottled water because of its specific mineral contents and the reported health benefit attributed to it. Meanwhile, in North America, consumers select brands based more on availability, price, the appeal of a brand’s particular image and taste. Package size, at retail, is also an important factor given that so much bottled water is consumed in cars in North America, whereas in Europe, most bottled water is consumed at home with meals, in the office or at restaurants.”

In North America, as people have started to think more about their health and the media began informing them 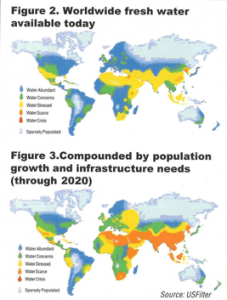 The price of the tap water is also a reason for this difference. The United States is the largest water consumer in the world. Americans use about 400 liters (L) of water per day per person (105 gallons) and paid about 66 cents per cubic meter (264 gallons). Then comes Canada with 350 L per day per person (92 gallons) with a smaller price of 61 cents per cubic meter (m3). In Europe, we see the opposite phenomenon; the French consume 150 L per day per person (40 gallons) for $1.31/m3 and the most expensive country is Germany with the same consumption as France but at $2.18/m3. This offers some idea why European people drink more bottled water and why North Americans drink more tap water.

Boom in coolers, etc.
Like we saw, European people drink more and more bottled water and they leave tap water for the house works. As other quality water options have become available to them, we’ve seen an increase in use of water coolers and residential water treatment devices. It’s only been a few years, though, that products such as pour-through pitchers, carbon faucet and shower cartridges, countertop and undersink filter systems, etc., could be seen in general stores and TV advertising. More people have started to use these processes to improve drinking water quality in their homes—the most common system being the carbon filter pitcher. This product is growing rapidly in popularity in France.

But water treatment systems like softeners, filter cartridges and reverse osmosis (RO) aren’t as present in Europe. This kind of product is used by more financially well off, in general. But, again, with increasing TV and other media reports informing consumers about nitrate, lead and other water quality concerns, demand has risen for small water treatment systems. Another option is the water cooler, which offers a good transition point between bottled water and water treatment devices.

In France, coolers were familiar from U.S. movies and TV series, but weren’t used because a need wasn’t perceived. Now, this product is used in most of society—offices, government buildings, schools, sports gymnasiums, etc. In the United Kingdom, water cooler use has exploded. Richard Hall of British market research firm Zenith International, said: “Ten years ago, very few people in Britain had ever seen a water cooler. At the end of 1998, there were as many as 200,000 in offices, canteens, showrooms, waiting rooms and homes right across the country (see Figures 3&4).

“That’s 21 percent more than a year ago and nearly four times the level five years ago,” he added. “One in five employees now has access to a water cooler. There is a real water cooler boom in Europe, in nine years, water cooler growth is up to 35 percent, there were 135,000 units installed in the last year and now, there are 500,000 units on this continent. The number of water coolers has grown four times in Italy, two times in Finland, Greece, Spain, Switzerland and Austria. The first country is UK with 200,000 unit; then comes France with 84,000. 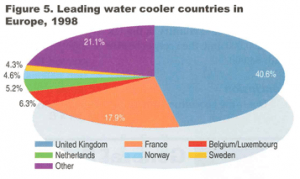 Conclusion
Due to the water geocultural differences about water between both continents—Europe and North America—we can see two kinds of markets. In North America, there’s much fresh water, the residential system is common and people traditionally trust in their tap water or their system. That’s why they don’t drink bottled water to the extent that Europeans do. However, the growing bottled water market in the North America shows us that people in the past decade trust their tap water less and the PET plastic bottle is a useful alternative for those on the go. This format is most common in 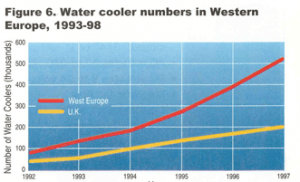 Europe, with people taking 1.5-L or 0.5-L bottles everywhere with them. The market in future years in North America will trend even more toward these options.

“Don’t forget, bottled water is the fastest growing major beverage category in the U.S. The category increased 10 percent in 1999 to 4.2 billion gallons”, said Charlene Salito, an analyst with Beverage Marketing Corp. Such market data only confirms that in North America, there’s still much appeal and room to grow for bottled water.

Acknowledgement
The author would like to thank all those that helped to find data for this article at Puribec, Evian, Zenith International, Beverage Marketing Corp., Hidell Eyster International, USFilter Corp., the International Bottled Water Association and Environment Canada. Thanks in particular to Michael Neuwirth, Fiona Herrington, Charlene Salito and Stephane and Serge Giasson for their help and trust.

About the Author
Jérôme Papaya is special projects manager at Puribec Inc., Rimouski, Québec, Canada. Papaya holds a bachelor’s degree in microbiology from the Ecole Nationale de Chimie Physique et Biologie in Paris in Paris, and earned a superior technician brevet in water professions in 1995 from the same school. He joined Puribec in1998, and works on water treatment for municipalities, hospitals and industries, as well as heads the analysis laboratory. Papaya can be reached at (418) 722-7326, (418) 722-9341 (fax) or email: [email protected]