Carbon and MTBE—What’s a Dealer to Do?

By Neal Megonnell and Andy McClure

Summary: MTBE has emerged over the past four years as a major threat to drinking water quality, for both ground and surface water sources. While government and regulatory officials weigh its benefits and alternatives as a gasoline additive to helps fuel burn more efficiently and provide cleaner air, researchers are focused on better, cost-efficient methods to remove it from water.

Since the late 1970s, methyl tertiary butyl ether (MTBE) has been used as an octane enhancer in gasoline. Originally developed as a replacement for lead to maintain octane levels while allowing for cleaner burning gasoline, in 1990, MTBE became a key ingredient for reformulated gasoline (RFG), which was mandated by Congress for certain regions in order to meet the requirements of the Clean Air Act Amendments.

Air vs. water
The use of MTBE in gasoline has indeed helped improve the nation’s air quality. However, this improvement in air quality has come at the expense of water quality, as MTBE has steadily grown to become a significant threat to drinking water supplies. In the past several years, MTBE has been detected in groundwater and surface water sources around the country, and occurrences are only expected to grow as more municipalities and regulatory agencies begin to test for MTBE in drinking water sources.

Despite the fact that MTBE has never been declared a regulated drinking water contaminant, many states and municipalities are moving to set limits. In 1991, the California Department of Health Services (DHS) established an interim “action level” of 35 parts per billion (ppb) for MTBE in drinking water. As a result of this action, the city of Santa Monica lost 80 percent of its local groundwater supply in 1996. The city must now spend $3.3 million annually to purchase alternative water supplies. In May 2000, the DHS set a health-based standard of 13 ppb to go along with the taste-and-odor-based standard of 5 ppb that the agency set in 1999.

Congress is currently debating the future of MTBE as an additive in gasoline, and the Clinton Administration has publicly urged for a switch to ethanol to meet the oxygenate standards of RFG. Others in Congress have urged for removal of the oxygenate standard in RFG to help facilitate the elimination of MTBE as a fuel additive. While this debate continues, the need for effective methods to handle existing MTBE contamination in drinking water grows.

As a compound with high solubility, low adsorption to soil and poor natural biodegradation relative to other hydrocarbons, MTBE is a highly mobile compound in groundwater. These same properties make MTBE a difficult contaminant to remove, and the cost to effectively treat MTBE relative to other common gasoline-related contaminants is quite high. For dealers dealing with MTBE problems in residential and light commercial/industrial applications with point-of-entry (POE) systems, the technology choices are limited. With these small-scale systems, activated carbon is one of the few commercial technologies they have at their disposal to combat MTBE. Thus, selection of the proper type of activated carbon is critical when considering MTBE removal.

Carbon as media of choice
Activated carbon, which has been used for years for various POE applications, can be manufactured from a variety of carbonaceous raw materials, the most common being coal (bituminous and lignite), wood, and coconut shells. The goal of the manufacturing process is to generate the proper pore structure within the carbon particles. This pore structure can vary greatly depending upon the raw material used and activation process. It’s directly tied to adsorption capability and the carbon’s ultimate performance in water treatment.

Organic contaminants are often characterized as “weakly,” “moderately,” or “strongly” adsorbing compounds. For water treatment, a compound’s affinity for adsorption is determined primarily by its solubility and its concentration. Contaminants that are very soluble in water, such as MTBE, fall into the “weakly” adsorbed category, and a significant amount of energy within the activated carbon’s pore structure is required to adsorb them from water. Also, the lower the concentration of a particular contaminant in solution, the higher the adsorption energy required to effect further removal. In many drinking water applications, the concentration of MTBE is often quite low, again requiring high adsorption energy for effective carbon performance.

To properly remove MTBE, an activated carbon requires a higher percentage of these “high energy” pores, which are the smallest adsorption pores in the carbon’s structure. Most traditional activated carbon products have difficulty adsorbing MTBE because they don’t have the proper or consistent pore structure. Due to their relatively open pore structure, lignite coal and wood-based carbons typically have a low percentage of high-energy pores, and thus are often poor performing for MTBE removal at trace levels from water. Many bituminous coal-based carbons perform consistently, but have a low to moderate high-energy pore distribution.

Coconut shell approach
For years, the general opinion within the industry was that coconut based carbons were the best activated carbons for trace removal applications. In general, many coconut-based carbons often have a good distribution of high-energy pores, and can perform well for MTBE removal. However, coconut-based carbons do exhibit a great deal of variation in performance for trace level MTBE applications due to variations in this pore structure. These variations are tied into both the raw material coconut shell and the manufacturing process for converting this shell into the final activated carbon product.

The raw material for coconut-based carbon is coconut shell that’s basically a by-product of coconut harvesting. As an agricultural product, this coconut shell is subject to variation from one location to the next, and from one season to the next due to changes in weather, climate, and growing conditions. The initial step in converting this shell into activated carbon involves charring the shell in kilns, drums, or open pits dug into the ground. This charring step can occur at the individual grower’s site, or at a centralized location that collects shells from various growers. The purpose of the charring step is to remove volatile matter, which typically makes up almost two thirds of the raw coconut shell. The charring process is not scientifically controlled. The temperature, duration of charring, and other conditions all vary from one grower to the next and from one batch to the next.

Once the charring process is complete, the char is sold to a carbon manufacturer, who then activates the char to form the final carbon product. Generally, the manufacturer crushes and sizes the char, calcines it—heats to high temperatures under inert conditions—to remove any residual volatile matter, and then activates the calcined product at high temperatures in the presence of steam to produce the final activated carbon. Each manufacturer’s process can be different, and thus differences in the final product can be seen from one manufacturer to the next, even when starting from the same coconut char.

Due to economics, the activation of the coconut char is completed at locations close to the geographic regions where coconuts are grown. Thus, the vast majority of coconut activated carbon production occurs in Southeast Asia. The final product is then imported into the United States through various brokers, resellers and distributors. The fact is no U.S. supplier of coconut shell carbons has complete control of the manufacture of coconut shell-based activated carbon.

The result of these various steps is that the final coconut activated carbon product, while often containing inherent pore structures amenable to trace level adsorption such as MTBE removal, contains considerable trace capacity variation between suppliers and even from one production lot to the next. For a typical POE system—1 cubic foot (ft3) carbon bed treating 400 gallons per day (gpd) and removing 100 ppb of MTBE—this trace capacity variation translates into a wide range of bed lives when coconut carbon is used (see Table 1).

Coal approach
Traditional coal-based carbons are inherently less variable than coconut-based materials, due to less variation in raw materials used. Differences between types of coal—from one coal seam, or vein, to the next—and in manufacturing processes, however, do lead to variations in performance in trace level applications such as MTBE. Many manufacturers use a blend of coals as feedstock for activated carbon production, which minimizes variation due to individual coal sources. There are two main manufacturing processes used for bituminous coal-based carbons. The first process involves reagglomeration of fine coal particulates using a binder material. The second involves direct activation of larger coal particles. No matter what source is used or what manufacturing process is employed, most coal-based carbons commercially available today aren’t manufactured to optimize trace level capacity and, thus, also exhibit performance variation (see

Recent advances in technology, though, have led to development of bituminous carbons that can be manufactured to specified trace capacities through careful raw material selection and activation process monitoring. The amount of high-energy pores within activated carbon can now be measured by a new method that determines a carbon’s trace capacity number. This new trace capacity number directly correlates to the carbon’s ability to adsorb organic contaminants such as MTBE at low concentrations. By specifying and controlling the carbon’s trace capacity during its manufacture, the resultant product maintains a consistent level of high-energy pores required for these types of applications. For comparison purposes, the MTBE capacity—or the point where the carbon has reached its adsorptive limit with regard to whatever contaminant you are dealing with (MTBE in this case)—of a trace capacity controlled carbon is shown alongside the traditional carbons in the data tables presented above.

New evaluation method
Traditional carbon characterization methods, such as the iodine number, aren’t effective at gauging or controlling a carbon’s performance at adsorbing trace levels of contaminants. As shown in the attached data (see Figure 1), 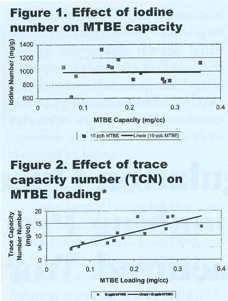 no correlation exists between iodine number and MTBE capacity for a representative sampling of numerous activated carbons:

Through specifying a minimum trace capacity number, one ensures that the resulting carbon product is ideally suited for treating low concentrations of contaminants and difficult to adsorb compounds such as MTBE. Through use of a carbon with a high trace capacity number, dealers can avoid inconsistencies inherent in traditional carbons and be assured of consistent performance in MTBE removal applications.

Conclusion
The Clean Air Act Amendments of 1990 brought MTBE into our gas tanks in order to clean up our air, and as an unwanted side effect, brought MTBE into our drinking water. Fortunately, dealers encountering the problem in POE applications can utilize a well-established technology—activated carbon—to deal with the problem. Furthermore, recent advances to optimize activated carbon for this application through use of the trace capacity number can give dealers peace of mind that carbon can work consistently, predictably and cost-effectively in this application.