Tanks: Which Pressure Tank Do I Sell?

Summary: Sizing of tanks can be crucial to an effective system that keeps your customer happy not just with the quality but the quantity of treated water they receive. Here we discuss a little history and factors affecting that.

Sizing a pressure tank in a water treatment system to fit the pump is crucial. A tank that’s too small can cause serious problems. Consider two factors when selecting a tank—1) what the tank is for, and 2) how the tank works.

Boyle’s Law
They’re called pressure tanks for a reason—they store pressure. Their secondary purpose is to hold water. The way it works is rather simple, and a British man named Robert Boyle (1627-91) explained the forces of nature that govern the operation.

Naturally, the rule is called Boyle’s Law, which says that for a body of gas at constant temperature, the volume is inversely proportional to the pressure. For those of you who enjoy math, I’ll include the formula: VTx ((PO/P1)-(PO/P2))=VD

Boyle is saying that—in a perfect world—if you put a specific amount of air in a tank, that air will take up so much room.

When you add water with a pump, the air will be compressed, and you will have a fixed amount of water in the tank. The bottom line is—just how much water can you have in a tank at a certain pressure? Boyle’s formula helps figure that out.

There are two main types of tanks: air-over-water and pre-charged. The latter can have a bladder, diaphragm or air cell.

Remember that water is non-compressible at the pressures a normal household uses. When someone turns on the tap, water comes out. When the pressure inside the tank drops because you’re using water, the pressure switch turns the pump back on.

Unfortunately, the tank’s original design allows the water and air to touch. The air dissolves in the water and is flushed out with the water. In short, the tank loses air and, thus, pressure.

When submersible pumps came on the market, they used a “bleeder orifice” to trap air in 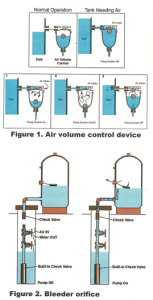 the drop pipe and push it into the tank when the pump came on. The AVC lets out the excess air in the following manner. The water from the pump pushes the trapped air into the tank. If the air that goes into the tank takes up too much space, water can’t enter. The AVC has a paddle on it that floats in the water and drops, opening up a snifter valve, allowing the air to escape and water to continue filling the tank to its maximum level. This is illustrated in Figure 2.

On and off pressure
Often, the name of the tank told you what it would hold. For example, a 220-gallon tank would hold 220 gallons. And here’s where Boyle’s Law comes into play. Boyle figured out just how much air was in the tank and how much water it would hold at a certain pressure. When he devised the formula, 20/40 was considered a good pressure ratio. This corresponds to the “on/off” pressure of the tank. When the pressure inside the tank is 40, it turns the pump off; and, when it drops to below 20, it turns the pump on. Back then, when just filling a bathtub, 20/40 was acceptable; with modern conveniences like showers, however, higher pressure is required to ensure 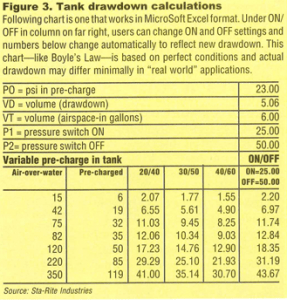 the water doesn’t dribble from the fixture, be it a showerhead or spray hose on a kitchen sink. The chart in Figure 3 shows how much water such tanks would hold at three different pressure settings and corresponding requirements for pre-charged tanks. These are the settings used most often today.

You’ll notice that the larger the tank, the more water it will hold. However, notice, too, that the more pressure in a tank, the less water it can manage. Remember that we’re compressing the air in the tank and, therefore, not all of the water in the tank can be considered usable. This is why tanks need to be so large. They needed the room to store the water that was used solely to compress the air.

There basically are three parts to the tank:

Remember that while they were considered distinct sections of the tank, there was nothing separating them from each other—hence the loss of air from the tank.

Heat’s the culprit
One of the most susceptible parts of a water system is the electric circuit controlling the pump. Heat is a very real “killer” to electronic components of a water system. The on/off cycling of a system—caused by a tank without enough air in it—can cause the contacts in the pressure switch to fuse. This means the pump would switch on and not be able to shut itself off.

Cycling is another result of the lack of air in the tank when the AVC is not working properly. This would cause the pump to turn on and off more often than it should. And heat builds up every time it turns on and off. Because a motor uses three times the amps at a “turn on” than while running, the motor heats up, too. This, in effect, shortens the life of the motor.

An electric motor only has so many “starts” in it. So, the fewer times it starts, the longer it will work. The starting amperage only takes place in a microsecond, so we’re not really talking about the money savings of the electricity—but the overall life of the system.

Pre-charged tanks
In an attempt to cut the loss of air, tank manufacturers invented the pre-charged tank. Based on the same principles that Boyle employed, these tanks eliminate the need for the water cushion between the drawdown and the air. This was accomplished by using a device such as a floating disk, bag or diaphragm.

The floating disk still allowed some water to touch the air, and so the diaphragm and bag—or bladder—became the best option to truly separate water and air.

The tanks could be made smaller, as they no longer needed the cushion of water. Thus, a smaller pre-charged tank does the same job as a much larger air-over-water tank.

For example, it used to take a 220-gallon tank to get 26 gallons of drawdown at 30/50 pressure. Now, it takes an 85-gallon, pre-charged tank to do the same job. Just think of the room saved in a basement or crawlspace!

And, of course, because you’ve separated the air and water you no longer need to constantly fret about getting additional air into the tank. You’ve eliminated the need for an AVC. You still have to be on your toes, though, as it’s possible for air to sneak out of the tank. So you have to check it, but not as often.

Tank killer
In all the years I’ve worked in customer service, this is what I’ve noticed as the “tank killer”—air seeping out and people not checking for it.

Tank manufacturers put a pre-charge in the tank, so it is also necessary to check the pre-charge before turning on the pump.

Where you live will affect your tank, especially if you live in warmer climates. Heat from the sun will drain a tank of its pre-charge. This makes it imperative that you check your pre-charge more often, such as once a month when the temperatures climb.

So… which tank do I sell?
OK, so now we know how a tank works and what Boyle’s Law tells us. But the question remains—which tank should I sell?

The tank, pump and motor manufacturers I’ve talked to suggest a tank have one gallon of drawdown for every gallon the pump will produce. This means the pump will have a minimum run-time of one minute. The longer the pump runs, the better for its overall life—remember the heat factor.

Again, in a residential system, we consider that the pump won’t start more than a certain number of times a day—meaning 24 hours—not just a workday of eight hours. How many times a pump motor can start will depend on the horsepower. The smaller the motor, the more starts you can get out of it because not as much heat is generated.

I’ve been asked many times in the schools I run—and by some very upset salesmen—“So why do you make the smaller tank if you don’t want me to sell it?” What they’re referring to is the 20-gallon, pre-charged tank that’s sometimes called a 42-gallon tank because it has the equivalent work output of about 5-to-6 gallons of drawdown.

The answer is very simple and quite often vexing: pump manufacturers make pumps that only pump five gallons a minute. The smaller tanks fit those pumps.

Conclusion
There are a number of points to keep in mind when sizing a tank properly for the needs of your customer. And one thing’s for sure—it’s not simply the size of the tank that matters. Proper pressure, as evidenced by Boyle’s Law, is a crucial factor in determining the best choice for space and water requirements.

About the author
Bill Corey is a trainer and customer service representative at Sta-Rite Industries’ Water Training Institute in Delavan, Wis. He can be reached at (800) 680-6956, (800) 426-9446 (fax) or email: bcorey@staritemail.com

More often than not, when water treatment dealers are selling equipment and customers making their choices: price gets in the way of a properly sized tank. And to this point, I’ve put a good amount of effort into teaching installers how to sell. Most do just what their competitor does—but when a price war breaks out, nobody wins. The installer loses. And, most importantly, the customer loses.

Many installers don’t know to tell customers why a bigger tank is better. And, so to make a sale, they’ll sell what the other guy does, supposedly saving the customer money while actually selling him or her a headache. This is a shame, as selling the correctly sized tank—even though on the surface it seems to cost the customer more—will work better, last longer and, eventually, save the customer money.

Some installers believe the only way to make money is to work harder. They know if they sell a smaller tank, the system will fail sooner and they’ll get a call back. That’s selling dissatisfaction. What it does is ruin the market and make everyone look like thieves or bumblers. The customer is confused, since he or she was looking at saving money. They thought: “The smaller tank costs less, so why not buy it.”

A good salesman will inform the customer what tank is really right for him.
k with a large pump won’t work. It’s just a matter of how long it will work.
—Bill Corey