Portable Purification, Part 2 of 2: On the Road or Waves—Yachts and RVs Offer New Opportunities for POU/POE

In Part 1 of this series, water treatment for recreational vehicles (RVs) and approaching that market niche were discussed. Here, we’ll cover water treatment in the marine industry—particularly private boats and yachts.

Like RVs discussed in last month’s article, water treatment for boats has evolved into being portable only in that vehicles where installed equipment is mobile. In this case, they’re waterborne, which introduces unique challenges and opportunities.

Catching the breeze
An avid sailor, C.D. “Charley” Poellet, president of K&M Plastics, Elk Grove Village, Ill., says he doesn’t know much about water treatment for boating, largely because he takes water with him on short trips.

“All I do is filter my water with a Sta-Rite carbon filter before I put it into a storage tank, but I only carry 80 gallons,” Poellet said. “If I think I’m going to need more, I just stock bottled water. Unless you get into the really good-size boats—i.e., power boats with generator sets to power a reverse osmosis [RO] unit—you won’t have a watermaker.”

A ‘watermaker’ is market-specific jargon for a high-pressure RO or multi-pass desalination system.

Regardless, he said, the last thing a boat owner wants is to be caught out at sea without potable water. It’s just as bad as being stranded in the middle of the desert.

“We don’t use standard industry components,” Aponte said, “because when you take one of these boats out in 10-, 12- and 14-foot seas, everything on it’s going to take a heck of a pounding. You’ve got to design your systems so you don’t have related problems, like stripping a valve out of the top of a tank and flooding your engine room. They have to be installed on board such that they don’t move.”

This is particularly important if you’re out at sea for days or weeks at a time. It’s also important if you pull into a foreign port where the water source quality may be questionable. In addition, space is a premium.

“It’s similar to going up in a space shuttle,” Aponte says. “Everything they’ve got, they’ve got to take with them; so if you take up a lot of cabinet, counter or undercounter area, they miss that space in a big way.”

Consulting is done with captains to locate equipment inconspicuously so not to waste living space. It’s not uncommon to find units in an anchor chain or other storage locker with lines running throughout the vessel from the stern or bow.

“When you have a big boat and wash it, you may get spotting all over—which would take a hell of a lot of man-hours to shammy. We have several final rinse designs using deionizing resins for reduction of TDS and chlorides. That’s mainly for maintaining the hulls, painted areas and brightwork, which is all your stainless steel and glass.”

Size counts
Others in the industry agree with Aponte. Specific drinking water demands often depend on boat size.

“Usually, our bigger sport fish boats and motor yachts are 40-to-100 feet long and use a watermaker for 700 gallons a day. That tends to be the average size, because if they go to foreign markets—South America or the Caribbean—the water sucks,” said John Cotter, president of Marina Yacht Brokers.

Cotter worked with Stu Mitchell—past president of EcoWater’s predecessor, The Lindsay Company and former president of the Water Quality Association (WQA)—as president of a Lindsay chemical metering subsidiary. Both left to start the Punta Gorda, Fla.-business in the mid-’80s.

“Even sailboaters now will put a small unit for 60-to-100 gallons a day onboard running off a 12-volt system,” he said. “Until you get into real big yachts, there’s often not enough room in the engine room and that’s usually where these are put. They don’t take up much room, but you’ve got to be able to get to them to work on them. And they’re not inexpensive—with a 400-to-700 gallon RO system, you’re looking at $7,500-$8,000. But, if you’re paying a half million for a boat, it’s probably immaterial.”

Ken Hughes, president of Fort Lauderdale’s Delta Marine International, touts ozone as the technology of choice. An oceanographer with a lifelong passion for boats, he started his business in 1993 and promptly found success. Specializing in very large boats, he has a particular concern in treating for microorganisms transported via ballast water.

Today, Delta Marine’s systems are installed on the Navy’s research vessel Knorr (which helped discover the Titanic wreckage), a 315-foot private yacht and numerous smaller vessels, such as large boats on Arizona’s Lake Powell or Lake Meade. It has distributors in England, Singapore, Australia and the Bahamas.

Dealer approach
Sea Recovery of Rancho Dominguez, Calif., claims to be the largest manufacturer of watermakers for marine use with 60 percent of the market, according to dealer development specialist Andy Murphy.

“We’ve been in business for 20 years,” Murphy said. “We market through a dealership network of about 85 dealers around the world. We generally have two types of dealers. Land-based dealers work with larger systems for hotels and resorts that may be remotely located somewhere near the water. And we also have marine-based dealers that are familiar with boats inside and out. Some fall into both categories.”

Generally, he suggests dealers become as educated technically as possible about RO and other water treatment applications, gain a good understanding of the marine market and be committed to service.

“Most of our dealers for the marine market are usually in marine air conditioning, a similar electrical process,” Murphy said. “They’re familiar with different types of equipment and their installation.”

Sea Recovery specializes in watermakers and UV disinfection systems, weighing as little as 135 pounds, as quiet as 74 dB-A (65 dB-A is a normal conversation level) and that produce as much as 1,500 gallons a day.

Doubling up
Companies that historically have served the RV market—SHURflo, Everpure and General Ecology—also find the marine industry a natural extension with the portable nature and durability requirements of the equipment.

“There isn’t much penetration into the market, particularly on the OEM side,” said SHURflo marine market specialist Ryan Sessler. “There’s a few that may install inline systems, but it’s not like the RV industry, where there’s been a need recognized for a while now. And RVers have systems pre-installed in the RV and/or use systems while camping that are portable. That’s where the market started.”

SHURflo, which holds a major chunk of the RV pump market, recently released a line of filtration products that’s marketed in the marine market both for aftermarket and original equipment manufacturer (OEM) installation.

Sessler said the aftermarket end of the business seems to be taking off quicker, counter to the company’s usual marketing approach. For instance, West Marine, a retail outlet with about 235 stores nationwide, has picked up SHURflo’s line of filtration products as its exclusive water treatment systems.

“On the OEM side, what we’re trying to do is sell the faucet-filter combo,” he said. “You’re looking probably at cruisers, which range from 28 feet and above—boats that have plumbing systems. These are for people who want it to be like their home.”

Everpure’s Eleni Vlahos said it’s had an entire marine division for a while now.

“We make bromination systems, for which the U.S. Navy is one of our biggest customers, ” Vlahos said. “We do recreational boating and commercial fleets as well. The water purification system we use for RVs is also used in boats—yachts and smaller craft—as the principles are basically the same.”

Doing your own thing
James W. “Jamie” Wakem II, who heads Atlantic Filter in West Palm Beach, Fla., and is also a past WQA president, said his company has been serving boats for 25 years.

“A lot of boat owners and yacht refurbishers come over and purchase filters, watermakers and replacement components,” he said. “They also want softeners from us to wash down their boats. Typically, we’ve competed with Culligan, which will put exchange tanks on the docks and swap them out when necessary. This is seasonal, so permanent installations aren’t really practical. Still, we have had requests from captains to take them with them when they’re going to the Bahamas.”

A common product is a small softened water rinse-down unit—a 6-inch diameter × 4-foot long PVC tube with resin that connects to a hose on either side to offer a spot-free wash. Growth in these has been explosive because they’re relatively inexpensive and can be regenerated easily, Wakem said. They’re often not well maintained, though, and are quickly discarded. 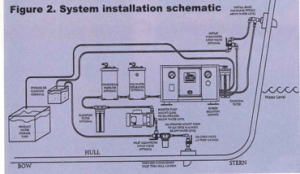 Conclusion
So, how big is this market?

According to the National Marine Manufacturers Association in Chicago, 77.8 million people participated in recreational boating in 1999, there were 16.8 million overall boats owned and $22.9 million spent at retail.

Marinas, yacht clubs, “dockominiums” and boat parks grew from 10,320 the previous year to 11,500. Michigan, California, Florida, Minnesota and Texas—in that order—have the most number of boats registered. And Florida, Michigan, Minnesota and California spent the most on boat, motor, trailer and accessory purchases.

“The best way to think about this market, though, is in the amount of systems sold in the marine industry,” said Al Leon, Sea Recovery vice president of marketing. “Taking into consideration the very small systems, you’re looking at about 10,000 [watermaker] units a year.”

Keep in mind, depending on the value of the yacht or boat, money may be no object. It should be small, light, dependable, 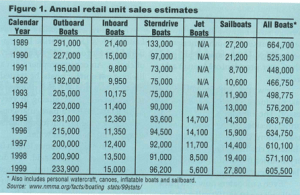 easily serviceable and quiet. After all, if you can hear the pump, RO or electronic equipment through the bulkhead, it can make for a rough night’s slumber. You’d prefer to listen to waves while rocked to sleep.
Figure 1. Annual retail unit sales estimates