Summary: The following report offers an interesting new look at the benefits of potassium chloride (KCl) as a softener regenerant, as well as the merits of taking steps to maximize the efficiency of the softening process in reducing sodium and chlorides in the environment.

The Priddis Greens Golf and Country Club was established southwest of Calgary, Alberta, over a six year period, from 1985 to 1991. It’s one of Canada’s premier golf courses, having hosted the LPGA du Maurier Classic tournament in 1999.

A housing development associated with Priddis Greens contains 116 residential units that are dependent on the Priddis Greens Services Co-op for both water supply and disposal of their wastewater products. The water supply comes from a well on the property that’s fed by aquifers and service water from Priddis Creek, which flows nearby.

The well water analysis is shown in Table 1. 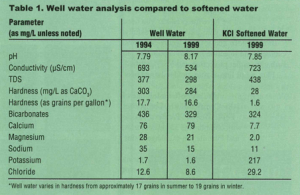 The following year, Priddis Greens removed all softeners from the homes in their residential community and installed a large central softening system regenerated with KCl at its water utility plant to supply residents and the club house with soft water. Elements of the central softening system included two 240,000 grain exchange capacity softeners, each containing approximately eight cubic feet of resin. Other notes:

Residential well comparison
To evaluate the change, soil and water samples were taken prior to the switch to KCl, and then again after three years. Following are results comparing residential well water analyses in 1995 and 1998.

It was noted that there was a drop in hardness—a decrease in bicarbonate, calcium and magnesium—within the seasonal variation. The sodium content of the well water dropped from 35 mg/L to 15 mg/L.

In comparing well water to KCl-softened water in 1999, the following observations were made:

Recycled water comparison
The Priddis Greens sewage treatment plant upgrades sewage water to a recycled water quality that’s suitable for irrigation. The recycled water is then stored in a 7.2 million gallon earthen reservoir and is used to irrigate the north portion of the golf course.

Over the four-year period, from 1994 to 1998 following the conversion from residential to central softening and the switch 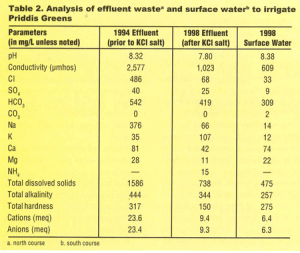 from NaCl to KCl as a regenerant a number of positive changes occurred in the ion content of the recycled water used for irrigation (see Table 2). Among the most significant that can be attributed to central softening are:

These changes are due to the increase in softening efficiency when Priddis Greens went to central softening. The individually-operated residential softeners contributed significantly to the build up of an undesirable ion content in the recycled water due to use of older, inefficient softeners; oversetting of softeners by homeowners, which resulted in unused salt winding up in recycled water; and use of time clock softeners rather than demand initiated regeneration (DIR) units, which contributed to the overall inefficiency. A follow-up research project is under way at the Windstone Golf Club in North Barrington, Ill., the objective of which is to determine whether similar results can be achieved by having the homeowners use properly set DIR KCl-regenerated softeners.

Other positive changes in the recycled water attributable to a combination of the switch to KCl and central softening include that the fact that sodium content fell by 82.4 percent. By calculation, this can be broken down as follows:

This resulted in a reduction of the sodium buildup in the soil with the resultant improvement in plant growth and improved soil permeability to both air and water.

In addition, potassium content in the recycled water increased from 35 mg/L to 107 mg/L—over 300 percent. Since potassium is a major plant nutrient, when the golf course was irrigated with this water, it received additional potassium. This contribution has been calculated and has subsequently reduced the fertilizer program cost.

Both of the above are very positive changes when evaluating the use of recycled water for irrigation.

Soil analysis comparison
Soil analysis prior to and after introduction of KCl water softening are show in Table 3. 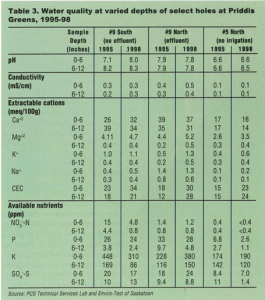 Soil samples were taken in the summer of 1995 and in the fall of 1998 from the 9th holes of the south and north courses in the fairway approximately 150 yards before the green. The south course is irrigated with surface water and the north course with recycled water from the treatment plant lagoon. Soil samples were also taken from a grassed rough area on the 5th hole (north course). The soil near the 5th hole has not been irrigated and provides a general background level of soil characteristics in the Priddis area and an indication of the changes to the soil due to irrigation, whether with waste or surface water.

On the south course, there was little change in extractable cations. Soil pH and cation exchange capacity increased but this could be due to a sample site variation. Available potassium decreased from 448 ppm to 310 ppm—or 30.8 percent.

In the north course, the change to potassium softened water led to the following changes in the 0-to-6 inch layer of soil:

Switching to KCl water softening appears to have had the desirable effect of increasing soil K while keeping soil sodium at a constant level.

When the project was initiated, the turf grass receiving recycled water wasn’t growing as well as areas irrigated with surface water. James Beebe, Priddis Greens golf course manager, indicated growth of the affected turf returned to normal with the switch to KCl as a regenerant. The decrease in TDS, chlorides and sodium and the increase in potassium in the recycled water combined to produce a very positive effect on the turf.

Recommendations
In communities experiencing plant growth problems when recycled water, high in sodium is used as irrigation water, the following course of action is suggested:

Develop an education program to promote the advantages of using KCl as a water softening regenerant, i.e., it reduces chloride by 12-to-20 percent, doesn’t add sodium to the ecosystem and does add potassium—a major plant nutrient. This approach has been used by Santa Barbara and Monterey County, which have developed mailers that go out with the utility bill and pamphlets that can be handed out at home shows, trade shows, etc.

The WateReuse Association of California, Pacific Water Quality Association and the water conditioning dealers should work together to develop a program that would target existing water conditioning units. The objective would be to promote the proper setting of existing softeners to reduce excess salt going into the wastewater system.

This would involve a public relations campaign to have water conditioning dealers contact their customers and encourage people with softeners to contact their dealers to have softeners set at the most efficient setting. The promotion would involve both organizations, the water utility and the dealer. It also could look at offering an incentive to promote upgrading existing time clock softeners to demand initiated regeneration.

Conclusion
Such a cooperative effort could be an excellent program for the Water Quality Association to promote beyond California’s borders. Involving recycled water providers, dealers and homeowners to promote the efficient use of water softeners would dramatically improve the overall quality of recycled water used in irrigation and would, hopefully, avoid confrontational legislation restricting the use of softeners.

Positive legislation can help, such as California Senate Bill 1006 passed last fall which requires that: 1) All new residential softeners sold after Jan. 1, 2000 have to be either DIR or use portable exchange tanks and meet a salt efficiency standard of 3,350 grains of hardness removed per pound of regenerant, and 2) the efficiency standard will move to 4,000 grains in January 2002.

In the end, one cannot deny the fact that replacing sodium chloride with potassium chloride as a softener regenerant offers positive benefits for plant growth and the environment.

Acknowledgement
The above article was presented to Agriculture Committee of the Water Reuse Foundation, on Feb. 2, 2000. Special thanks from the authors go to Bill Wist, PCS Technical Services, and the staff of Priddis Greens Golf Course.

About the authors
Dr. Terry L. Roberts is vice president of the Potash Phosphate Institute in Atlanta, Ga. He can be reached at (770) 447-0335 or email: troberts@ppi-far.org


Dr. Kim R. Polizotto is chief agronomist for PCS Sales of Saskatoon, Saskatchewan. He can be reached at (306) 933-8544 or email: kimpolizotto@potashcorp.com


Sidney S. Blair is president of Kaleidoscope Systems Inc. His bachelor’s degree in agriculture and his master’s in soil science and plant nutrition are from the University of Saskatchewan. He’s worked as a soil fertility extension specialist in agronomy and sales management for the J.R. Simplot Company and, for 19 years, in sales management with the Potash Corporation of Saskatchewan. He’s currently in the second year of a two-year contract with Morton Salt to assist with marketing its new potassium-based water softening regenerant. Blair is a member of the Agriculture Institute of Canada, American Society of Agronomy, Soil Science Society of America, American Water Works Association, Water Quality Association and WateReuse Association. He can be reached at (306) 653-1028, (306) 665-0134 (fax) or email: ssblair@home.com