Summary: This article is the first in a periodic series describing a software program developed to simplify the calculation and graphing required by the American Society for Testing Materials (ASTM) standard test method for particle size distribution of granular activated carbon (GAC). GAC particle sizing information is important for design and operation of liquid-phase GAC process systems.

The organization has a published test method for particle sizing of GAC, the activated carbon form most used in water conditioning and purification. Other forms of activated carbon such as powder, pellet, block and cloth are used less frequently in water purification. The test method (D 2862) for GAC particle size distribution determination requires data calculations and graphing on log probability paper.1 Personal computers allow easy-to-operate menu driven programs to be developed, increasing staff productivity, among other benefits.

Activated carbon testing
Obtaining a representative activated carbon sample for laboratory testing is always of concern since this is a heterogeneous material, meaning it’s made up of dissimilar elements. GAC has a range of particle sizes, so a riffling or quartering of the laboratory sample assures that a representative sample is tested at the laboratory. The GAC particle sizing method consists of applying a known weight of GAC on the top sieve of a stacked set of five U.S. standard sieves and shaken under standard conditions for a specific time period. The weight percent of the total retained on each sieve and bottom pan is determined. Our personal experience has taught us to charge the top sieve with 100 grams. This simplifies the percentage calculations, and this amount doesn’t blind the screens. If particles lodge in the screen openings this “blinds” other GAC particles from passing through those filled openings. A mechanical sieve shaker used with the particle analysis has a side-to-side, up-and-down motion that minimizes binding. If 100 grams is charged to the top screen, the recovered weights from the individual screens and pan must not deviate more than two grams, in order to be compliant with ASTM. A larger deviation in the recovered weight requires repeating the method. Duplicate GAC samples are run to determine operator and/or interlaboratory repeatability, maximum deviations are defined by the ASTM method. With acceptable weight data the mean particle diameter (MPD), effective size and uniformity coefficient (see Table 1 for definitions) are automatically determined using this program. 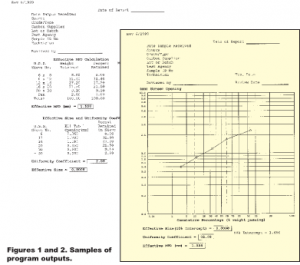 An example of the two-page output from this program is shown in Figure 1 and Figure 2, including: 1) example of effective MPD calculation using 8-x-30 mesh material, and 2) the cumulative particle size distribution curve. To get these two outputs the operator only needs to enter the weights on the individual screens from the laboratory data. The computer software has been programmed to make all calculations and present the information as shown here. This computer program is menu driven, with instructions for the operator at the bottom of each screen. It has been designed to allow the novice or busy staff to obtain accurate results in the least amount of time. Also, it provides archival outputs of the data in the standardized format that ASTM recommends. The information needed is highlighted with small rectangular boxes on the two-page output.

In GAC applications for water purification, pore diffusion is a major contributor to the overall diffusion rate. Selection of the particle size could be critical. The smaller the particle, the faster the diffusion and thus the shorter the mass transfer zone. This is illustrated in Figure 3.

It’s obvious from this graph that in a single fixed bed, the column having the smaller diameter GAC particles would treat a greater volume of liquid if it had to be taken off stream at c/c0 = 20 percent.

However, it should also be recognized that if the full scale GAC system is designed to remove only saturated GAC from the system by using beds in series or a pulse bed, the carbon dosage would be the same for either particle diameter.

New employees and individuals new to this business can benefit by becoming acquainted with the terminology used in this field. Again, see the glossary in Table 1.

Conclusion
Additional related software program topics to be the subject of upcoming articles include: aqueous and vapor-phase carbon adsorption; volatile organic compounds (VOC) carbon adsorption with relative humidity; physical/chemical compound database; ASTM aqueous isotherm; and refractive index estimator software. If you know of software on any of the above or other activated carbon topics you would like to see included in this review, feel free to recommend them. We welcome comments about use of computer programs to increase productivity of water treatment systems using activated carbon. Electronic data management and commerce are critical success factors for future business. 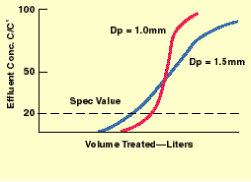 Acknowledgments
The authors would like to thank Dr. Milton Manes, Dr. Carl Yaws and Wayne Schuliger, P.E., for providing valuable information for the software programs developed by PACS. Richard Capp provides website maintenance for PACS at http://members.aol.com/hnpacs/pacs.htm. Information on this topic and other software programs can be seen on this website.

About the authors
Dr. Henry Nowicki holds an MBA from Robert Morris College in Pittsburgh and a doctorate in organic chemistry and biochemistry from Missouri’s St. Louis University. He’s president of PACS Inc. a provider of major instrumental analysis on samples for organic and inorganic compound characterizations and a variety of sorption services with an emphasis on activated carbon. Nowicki also is a member of the WC&P Technical Review Committee. He can be contacted at (724) 457-6576, (724) 457-1214 (fax) or email: HNpacs@aol.com

Homer Yute, M.S., is a mathematics and computer programming expert with PACS Inc. He holds a master’s degree in chemistry from University of Pittsburgh and a bachelor’s degree from Geneva College in Pittsburgh. He has been developing valuable computer applications for PACS—which is an acronym for two firms: Professional Analytical & Consulting Services and Pittsburgh Activated Carbon Services, Inc.—for the last 10 years.