Mixing Resins in Your Float:  Can You? Should You? And What to Look Out For

Summary: A little of this and a little of that may work in spicing a pot of stew, but when it comes to ion exchange float, you’d better know all the considerations in choosing new resin to add. More often than not, it’s a like-to-like equation. Here, such issues are discussed in detail for the dealer, who may also do commercial/light industrial work.

Substitutions of resin in softeners or demineralizers can be made if proper attention to physical and chemical characteristics of the resin are kept in mind. What should you consider when facing the choice of mixing different manufacturers’ products when you need to top-off tanks or add to your float of resin? Not all resins are identical, even from the same supplier and with the same brand name.

Important characteristics include particle size, capacity, moisture content, physical strength, resin color and taste and odor factors. In addition, floats that contain anion resins require attention to the type of anion resin to be used. This article outlines the steps you should take when faced with this choice. In all cases, the first step is to make sure you know what’s in your float and all of its qualifying characteristics. Make sure your resin supplier knows what’s in the float as well.

Softener floats
In many cases, softening resins can be interchanged without undue difficulty. Attributes such as capacity and moisture of the new resins should be closely matched if the resin being topped off has given satisfactory performance. Also, a float containing fine mesh resin should generally not be mixed with one of coarse mesh resin. A resin that has increased water retention due to swelling from chlorine attack may best be topped off with similar used resin from other resins from the same float when practical. Although macroporous resins can be mixed with gel resins in some circumstances, there is some danger that the stronger resin will crush and or grind down the weaker resin. Therefore, most substitutions should be of the same type gel-to-gel or macroporous-to-macroporous resins as those already in the float.

Finally, while there’s no technical reason, some customers perceive an advantage to dark color or to light color resin, so it’s usually desirable to specify resin color such that there’s no surprise. 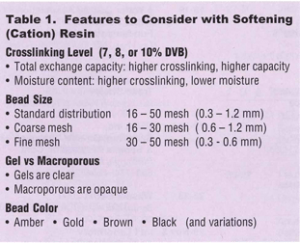 Weak base anion resins
In a separate bed DI, the choice of anion resin is far more complicated than the choice of cation resin. There are many more choices. Some separate bed floats include weakly basic anion (WBA) resins. These are almost exclusively macroporous, styrenic weak bases. Here, the issue of resin color isn’t important except for personal taste and appearance, but the issue of moisture content and capacity is even more important. The very high capacity weak based resins with low moisture, such as are used in the sugar industry are undesirable as make up of demineralizing resins because they are slow kinetically and don’t exchange ions rapidly enough to perform well.

These resins also have a small and sometimes significant fraction of strong base capacity depending on their intended application. With some WBA resins, the strong base capacity is significant, resulting in high pH and fishy odors coming from the weak based resin. This would not be a good choice for potable water, unless specific conditioning of the resin is practiced. On the other hand, some weakly basic floats depend on the strongly basic functionality to help remove alkalinity and carbon dioxide. Here, the weak base acrylic and weak base polyamine have advantages over their styrenic counterparts, but they’re gel types with different kinetic rates and should be considered only for total replacement. The polyamine weak base resins are known to have poor physical stability and are not the best choice in a float where the resins are regenerated frequently.

Overall, the styrenic macroporous weak base resins have been the industrial choice due to the best combination of capacity, durability and cost. 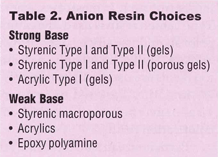 Strong base anion resins
Strong base anion (SBA) resins include Type I, Type II and acrylic resins. Type I resins are more thermally and chemically stable than Type II resins. The ion exchange functionality in strong base resins gradually converts from strongly basic to weakly basic. The rate at which this happens slows dramatically after the first year but not until a substantial amount of this conversion has already happened. Since Type II resins lose salt-splitting capacity faster than Type I resins, they’re not the best choice for floats where silica leakage is important to the end user. The resulting combination of efficiently regenerated weak base and silica- and CO2-removing strong base make these resins excellent performers on certain waters especially those high in chlorides where silica removal is also desired. Some operators use topping off as way to maintain higher levels of strong base capacity of these mixed anion beds.

The Type I resins are popular because they provide better water quality, particularly from a silica leakage standpoint. And, because they’re more chemically stable, they tend to last longer than the Type IIs. However, Type I resins are more prone to organic fouling, than Type II resins and aren’t the best choice in waters with a tendency of organic fouling—that is for waters with high total organic carbon (TOC) and/or color. Acrylic resins are sometimes used in waters that have high levels of organics, since their functional group makes them a Type I anion resin that’s made on a different polymer backbone. They enjoy the same improved ability to remove silica.

Acrylic anion resins are thermally and chemically less stable than styrenic anion resins and instead of conversion from strongly to weakly basic, they simply lose capacity. Except for color removal applications, they’re rarely used in portable exchange because of the stability issues and economics.

In separate bed applications, particle size and color are seldom important issues. However, operators who identify resin strictly by color can be confused if a new batch of resin of a different color is ordered. Keep in mind that batch-to-batch variations occur in all resins, so some color variation will always occur.

Mixed bed demineralizer
In mixed bed floats, color and particle size become extremely important issues. Both cation and anion components need to be evaluated and initial color and final color need to be considered. Resin color is quite important in mixed beds because color difference between the cation and anion resin is the primary means of verifying proper separation during regeneration. In most cases, where Type I anion resin is used, the cation resin should usually be dark brown or black. However, when Type II anion resins are used—since these resins turn very dark red during service—it may be better to have a light color cation resin.

From a chemical standpoint, it’s generally unwise to mix the Type I and Type II resins together. Thus, a mixed bed float using a Type II anion would generally not be well served by topping off with the Type I. This is because of stability and performance differences between the two types resins.

Before making any decision as to resin addition or full replacement, the float resin should be evaluated to determine its present condition. This is generally done by taking several samples at random and having them analyzed by a qualified laboratory. The result of this analysis is a prediction of the floats capabilities and overall opinion as to resin condition. This information is used to determine whether it’s time to replace part or all of the resin or to simply add more resin to make up for losses. The use of the float and end-user requirements must be taken into account when deciding what type of resin needs to be in the float. The industrial customers have far different needs than pharmaceutical or semiconductor customers. Working mixed beds have far less stringent purity requirements than polishing mixed beds but may have faster kinetics, which suggests the same resin may not do as well in both applications. 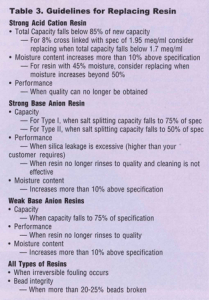 Conclusion
All of these factors need to be reviewed before the decision is made as to whether to top off or fully replace a resin. It is usually a decision based on performance and economics. Table 3 provides guidelines on replacing resin. The brand of resin to use for replacement or a determination if a particular resin from one manufacturer is compatible with an existing float resin can be made using these facts instead of basing the decision on fear or ignorance. In the final analysis, it’s a combination of planning, the technical ability and support of the resin supplier in helping the user to make a good choice.

About the author
Dick Chmielewski is West Coast technical representative for ResinTech Inc., of Cherry Hill, N.J., and has been in the water treatment industry for 20 years. He has a bachelor’s degree in chemical engineering from the New Jersey Institute of Technology and a master’s degree in the same study from University of California-Berkeley. Chmielewski can be reached at (760) 918-0803, (760) 918-0831 (fax) or email: dcres@inetworld.net 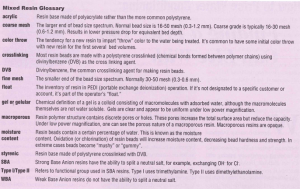