Believe it or not, radiation is a natural part of the environment in which we live. Everyone everywhere encounters the unexpected exposure of naturally occurring radioactivity in soil, water, air and food. Of all the exposure to such radiation that we receive, the largest percentage comes from radon.

What is radon?
Radon is a naturally occurring, highly radioactive gaseous element. It comes from the natural radioactive decay of radium and uranium found in soil. Although uranium is found in small amounts in most rocks and soil, radon is present virtually everywhere on the earth. Radon is colorless, odorless and tasteless. But when cooled below the freezing point, radon exhibits a brilliant phosphorescence, which becomes yellow as the temperature is lowered and orange-red at the temperature of liquid air.1

Radon was discovered by the English physicist Ernest Rutherford in 1899. Although the breakthrough is also credited to German physicist Friedrick Ernst Dorn in 1900, it may be fairer to say that Rutherford discovered radon’s alpha radiation and that Dorn determined that radium was giving off a gas.2 In 1908, Ramsay and Gray isolated the element and determined its density, concluding it to be the heaviest known gas.1

Radon health risks
Even though radon cannot be detected by a person’s senses, it and its radioactive byproducts are a real health concern. Radon’s primary hazard is caused from inhalation of the gas and its heavy metallic decay products, or progeny, which tend to collect on dust in the air.sup2 The problem arises when these elements stick to the delicate cells lining the passageways leading into the lungs. Scientists believe that radon exposure is the second leading cause of lung cancer.

According to the U.S. Environmental Protection Agency (USEPA), “Ingestion of radon in drinking water is suspected of being associated primarily with increased risks of tumors of the stomach, and with lesser risks to the colon, lung, and other organs.”3 The USEPA exposure pathway chart shown in

Figure 1 illustrates how inhalation of radon is a more serious health problem than the ingestion of it.

Exposure
Exposure to radon in drinking water is typically encountered in three ways: 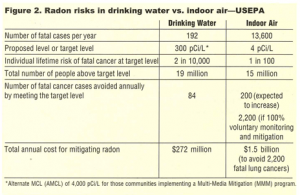 Thus, radon from water contributes to the inhalation risk associated with radon in indoor air. The chart in Figure 2 further compares and analyzes the risks.

Efforts to reduce risk
Drinking water quality in the United States is regulated by the USEPA under the Safe Drinking Water Act (SDWA). Since radon is acknowledged as a cancer-causing substance, the law directs the USEPA to set a maximum contaminant level (MCL) for radon to restrict the exposure of the public to the extent that is possible… as close to zero as feasible.4

Currently, the USEPA does not regulate radon in drinking water. But on July 18, 1991, the USEPA proposed a maximum contaminant level for radon in drinking water at 300 pCi/L, to address radon in public water supplies (systems serving 25 or more individuals or with 15 or more connections).5 On Oct. 21, 1999, the agency released a proposed new rule setting the MCL at 300 pCi/L, with an alternate limit of 4,000 pCi/L for those states and communities that implement a Multi-Media Mitigation (MMM) program, which is detailed later in this article.6

After the 1991 proposal, the USEPA issued a grant to the National Academy of Sciences (NAS) to conduct a risk assessment for radon in drinking water and an assessment of the health risk reduction benefits associated with various mitigation methods of reducing radon in indoor air.7

Affect on the dealer
How does the USEPA’s aggressive commitment affect you, the water treatment dealer?

Well water supplies
Since many homeowners own their own wells, they’re not legally obligated because the treatment of a private well water is voluntary and not regulated by the government, i.e., the SDWA does not affect them. But homeowners who wish to minimize their risk should test their water and consider taking action to reduce radon, if the concentration in the water is above the MCL.5 This is where you, the professional water dealer can employ the latest in radon reduction technology for home water treatment (see FYI: Radon). Common options include carbon filtration and aeration.

Public water supplies
These supplies, along with some special cases such as schools, will be subject to radon regulation if they rely on groundwater. This case presents three possibilities. The first is that the radon in the water is already below the MCL. This will apply to the majority of people in the United States; only about one of every 14 individuals routinely consumes water concentrations greater that the 1991 proposed MCL of 300 pCi/L. In this case, water below the MCL, nothing needs to be done.

The second possibility is radon in the water greater than the Alternative Maximum Contaminant Level (AMCL), in this case 4,000 pCi/L.4 An AMCL was established because the MCL was determined to be “more stringent than necessary to reduce the contribution to radon in indoor air from drinking water to a concentration that is equivalent to the national average concentration of radon in outdoor air.”5 This allows regulatory flexibility, in particular with respect to small systems that may not be able to cost effectively comply with the new MCL. In this second case, radon reduction (mitigation) would be required by law after the regulation is final.

The last possibility is radon in the water between the MCL and the AMCL. This requires the concentration be reduced to the MCL, or, if there is an approved state MMM plan, the risk to the population served by the water supply can be reduced by activities that reduce radon in air and/or water.4

Alternatives
After all is said and done, we still have choices. The USEPA has given such latitude for states—and individual communities if no state program exists—to develop a MMM program and submit it to the agency for approval. The program should also effectively reduce the levels of radon in the air and water. USEPA will approve a state’s MMM program if it’s expected to achieve equivalent or greater health risk reduction benefits than compliance with the MCL. The MMM program incorporates public awareness, testing of homes, encouraging clean-up and the changing of building construction as an alternative to the MCL. 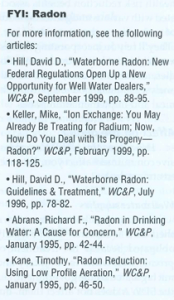 Conclusion
In closing, radon is a carcinogen that the USEPA has committed to reduce in our nation’s drinking water supply. Even though there are no safe levels for a carcinogen in a water supply, getting the level to as close to zero as possible is the ultimate goal. If the USEPA adopts the MCL into the SDWA, there will be unlimited opportunities for the water treatment professional to use their technologies and innovations to render water “safe” for use.

About the author
Michael Pedersen is president of Western Water International, dba Aquaspace Water Systems of Forestville, Md. A former U.S. Navy aviator, he holds a bachelor’s degree in business administration from Chico State University in California and a Master’s of Science in Education from USC. He also holds eight patents in water filtration. A past member of the WC&P Technical Review Committee, he can be reached at (301) 568-0200, (301) 736-3089 (fax) or michaelpedersen@aquaspace.com