While the USEPA does have extensive data on pesticides—including some endocrine-related data—there currently isn’t enough scientific data available on most of the estimated 87,000 chemicals currently in commerce to allow assessment of all potential risks. The Endocrine Disruptor Screening Program will enable USEPA to gather the information necessary to identify endocrine disruptors and take appropriate regulatory action.

Endocrine disruptors defined
Development of animals and humans is, in part, controlled by a system of hormones that signal growth, sexual development and many other essential functions. This hormone system, also known as the endocrine system, includes such organs as the testicles, ovaries and the thyroid, pituitary and adrenal glands. The function of the system is to regulate a wide range of biological processes, including control of blood sugar, growth and function of reproductive systems, regulation of metabolism, brain and nervous system development, and development of an organism from conception through adulthood and old age.

Hormones such as estrogen and testosterone are produced by the body to set off specific chemical reactions in cells and initiate the performance of specific actions. Unfortunately, a number of artificially produced chemicals can mimic natural hormones and block cell receptor sites or trigger actions, altering the body’s natural growth and development. These interfering chemicals are known as endocrine disruptors and scientists have identified more than 60 in our environment, including water. Endocrine disruption is one of the highest priority research topics for the USEPA.

Biological impact
Evaluation of health impacts of endocrine disruptors in humans has been more difficult to document, since exposure has little effect on the exposed organism but rather may have drastic effects on the offspring of that organism. Health effects on humans include lower sperm counts, undescended testicles, early puberty and thyroid dysfunction.

Animals from alligators to hamsters have been adversely effected by endocrine disruptors, both in the laboratory and in the environment. Some effects on wildlife include reproductive abnormalities, thyroid dysfunction, and feminization of males or masculinization of females. Following exposure to endocrine disruptors, birds have been born with crossed beaks, alligators have been born with abnormally small penises, frogs born with multiple legs and an overabundance of either male or female populations of fish have been noted. Wildlife researchers have shown an adverse relationship between endocrine disruptors and mating and parenting behavior, immune response, sexual development, or breeding abilities in a variety of species, such as terns, gulls, harbor seals, bald eagles, beluga whales, lake trout, panthers, turtles and others.

Most of the documented health problems have been associated with relatively high concentrations of pesticides. Whether similar effects are occurring in the general human or wildlife populations from exposures to ambient environmental concentrations is unknown. What’s known is there have been reports of declines in the quantity and quality of sperm production in humans over the last four decades, although other studies show no decrease. Scientist fear reported increases in incidences of certain cancers (breast, testes, prostate) may be related to endocrine disruption and that even small disturbances in endocrine function may have profound and lasting effects. Perhaps, most importantly, there are concerns over the potential for synergistic effects from exposure to multiple contaminants. Undoubtedly, the seriousness of the endocrine disruptor hypothesis and the many scientific uncertainties associated with the issue are sufficient to warrant a coordinated federal research effort. 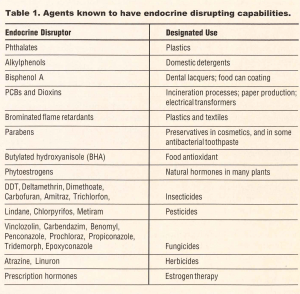 Chemical sources
Many chemicals have already been identified as endocrine disrupting, including dioxins, polychlorinated biphenyls (PCBs) and DDT (see Table 1). Although PCBs and DDT have been banned in this country since the 1970s, they’re still used in other parts of the world. Other sources of endocrine disrupting chemicals include common household items such as detergents, cosmetics, household cleaners and plastic food containers with nonyl phenol, alkylphenol ethoxylates and phthalates. Although pesticides play a vital role in controlling agricultural and public health nuisances, most endocrine disruptors in the environment are from pesticide applications. For this reason, risks and benefits of specific pesticide use must be evaluated.

We typically ingest endocrine disruptors via food and water. Some endocrine disrupting chemicals are slow to degrade and persist in the environment, where they may accumulate in the fatty tissue of organisms and increase in concentration as they move up through the food chain, known as bioaccumulation.

Control measures
The issue of endocrine disruptors and their impact on biological organisms isn’t being taken lightly by governmental or industrial groups. For instance, the Laboratory of Reproductive and Development Toxicology, at the National Institute of Environmental Health Sciences (NIEHS), is analyzing structures through molecular modeling, searching for the chemical keys that open a receptor’s lock and trigger hormonal activities. The group hopes to eventually develop a predictive screening device identifying endocrine disrupting chemicals and are particularly interested in the dose-response relationship, since low levels appear to contribute to human disease. Of its $280 million budget, NIEHS spends about $30 million a year on endocrine-related research.

Industries that produce suspected endocrine disruptors have also initiated new research programs. In particular, the chemical industry is funding a $1.5 million-a-year endocrine disruptor research program at the Chemical Industry Institute of Toxicology. That program plans research on receptor-mediated mechanisms; assessment of endocrine modulation in animals; metabolism, disposition, pharmacokinetics and homeostasis of such chemicals; and biomathematical modeling of reproductive endocrine systems.

Endocrine disruptors were recognized as an initiative in November 1995, by the NSTC (National Science and Technology Council) Committee on Environment and Natural Resources (CENR), a cabinet-level council chaired by President Clinton that serves as the principal means for coordinating science and technology issues across the federal government. The CENR established a Working Group on endocrine disruptors that’s chaired by the USEPA with vice chairs from the Department of the Interior and the NIEHS.

Other participating agencies include the National Oceanic and Atmospheric Administration, National Science Foundation, Food and Drug Administration, Centers for Disease Control, Agency for Toxic Substances and Disease Registry, National Cancer Institute, Smithsonian Institution, the Departments of Agriculture and Energy, and the Office of Science and Technology Policy. This concerted effort is aimed at gathering more information on the potential health risks of endocrine disruptors and the need for possible regulation.

Conclusion
While there’s no direct evidence from human studies to confirm a causal link between exposure and effect, concern exists and is strengthened by reports of adverse reproductive and developmental effects in wildlife, possibly mediated via endocrine disruptive pathways. Water treatment processes designed to remove carcinogens and pesticides are effective at removal of those agents identified as endocrine disruptors. More difficult to control is the recreational waterborne route and the bioaccumulation of endocrine disruptors in aquatic species.

As research continues and public awareness increases, the next decade promises to reveal the true impact and breadth of endocrine disrupting chemicals.

About the author
Dr. Kelly A. Reynolds is a research scientist and microbiologist at the University of Arizona with a focus on the development of rapid methods for detecting human pathogenic viruses in drinking water. She also has been a member of the WC&P Technical Review Committee since 1997.