The Chlorination of Drinking Water: Benefits, Issues and the Future

By Keith A. Christman

Summary: While there may be concerns surrounding its use, the benefits of chlorination far outweigh the risks, thus chlorination as an effective water disinfection process cannot be set aside. In combination with filtration and other treatment technologies, chlorination is responsible for drastically reducing bacterial and viral contaminants and their health risks in treated drinking waters.

Undeniably, chlorine disinfection of drinking water has saved millions of lives since its first use in U.S. drinking water supplies in Jersey City, N.J., in 1908 to control bacteria. However, this great public health success hasn’t come without controversy. Some people react unfavorably to chlorine’s taste and smell, and relatively new issues surrounding disinfection by-products (DBPs) have attracted more attention to this dramatic achievement. These DBPs involve the reaction of chlorine with organics in water to create trihalomethanes (THMs), of which long term consumption some research shows may increase cancer risks.

Despite this, chlorine will continue to play a major role in drinking water disinfection in the future. Increasingly, however, other treatment technologies such as chlorine dioxide, ozone, ultraviolet and point-of-use/point-of-entry (POU/POE) devices have been added to water treatment to augment the protection provided by conventional treatment and chlorination. These technologies offer additional barriers to pathogens, acting as complements to chlorination—not substitutes. For better or worse, some of these alternative treatments are being substituted for chlorine.

Chlorine disinfection benefits
Before the advent of chlorination for disinfecting drinking water, typhoid fever killed about 25 out of 100,000 people in the United States annually (see Figure 1). 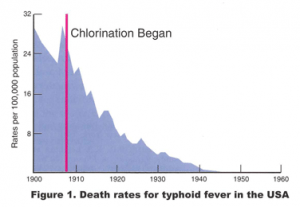 These death rates are approximately equal to today’s U.S. death rate for automobile accidents. Filtration and chlorine disinfection of drinking water have been given a fair share of credit for our 50 percent increase in life expectancy during the 20th century. Because of the overwhelming evidence of the public health benefits of drinking water chlorination, Life magazine recently cited drinking water filtration and chlorination as “probably the most significant public health advance of the millennium.” While the National Academy of Engineering named “Safe and abundant water” as number five out of its list of 20 Top Engineering Impacts of the 20th Century.

Fortunately, typhoid, cholera, dysentery and other diseases associated with inadequately treated water have been virtually eliminated in this country through use of filtration and disinfection to kill bacteria, viruses and other pathogens. Tragically, this isn’t the case in countries where treated drinking water is unavailable. According to the World Health Organization, about 25,000 children die every day from illnesses associated with drinking water. These deaths are a tragic reminder of the importance of filtration and chlorination.

Chlorine-based chemicals have been the disinfectants of choice for treating drinking water for nearly a century. In fact, 98 percent of all U.S. systems that treat water employ chlorine-based disinfectants. More than 200 million Americans receive chlorine-disinfected drinking water every day. While chlorine’s most important attributes are its broad-spectrum germicidal potency and persistence in water distribution systems, its ability to economically address many other water treatment concerns has also supported its wide use.

Chlorine-based compounds are the only major disinfectants exhibiting lasting residual properties. Residual protection guards against microbial regrowth and reduces contamination risk as the water moves from treatment plant to household taps. Chlorine residual monitoring also acts as an indicator of a breach in system integrity that can be used to detect intrusions more rapidly than microbial monitoring.

DBP concerns
In 1974, U.S. Environmental Protection Agency (USEPA) scientists determined that chlorine reacts with certain organic materials during water disinfection to create THMs, including chloroform. Fears that THMs could be a potential human carcinogen led the agency to set a maximum contaminant level (MCL) for these DBPs at 100 parts per billion (ppb), or micrograms per liter (µg/L), for systems serving more the 10,000 people.

In December 1998, the USEPA revised the MCL for THMs in the Stage I Disinfectant/Disinfection By-Products (DBPs) Rule based on an agreement between members of a Federal Advisory Committee, which included the Chlorine Chemistry Council and other stakeholder groups. The rule mandates enhanced coagulation to remove DBP precursors, i.e., organics that react with chlorine to form THMs, etc. The rule also sets new MCLs for total trihalomethanes (TTHMs) at 80 ppb, haloacetic acids (HAA) at 60 ppb and bromate at 10 ppb.

Recognizing that other chemical disinfectants also produce by-products, which haven’t been thoroughly studied, the committee was cautious about encouraging use of alternative disinfectants that may produce other unknown by-products. It also was very cautious about any changes that would encourage utilities to reduce the level of disinfection currently being practiced, while still limiting maximum residual levels leaving water treatment plants. There was widespread agreement among committee members that risks of microbial pathogens in drinking water must not be allowed to increase.

Before finalizing the Stage I D/DBP Rule, the USEPA reviewed its scientific basis in a Notice of Data Availability (NODA) published in the Federal Register on March 31, 1998. This notice proposed changes to maximum contaminant level goals (MCLG) for DBPs based on new research that had recently become available. USEPA sets MCLGs at a level at which no known or anticipated adverse effects on health are expected and which allows for an adequate margin of safety. The most important change in this notice impacting chlorine was the proposed increase in the MCLG for chloroform from zero to 300 ppb. Chloroform is the dominant species in TTHMs. In proposing this change, USEPA endorsed the recommendations of an expert panel convened by the International Life Sciences Institute. This panel concluded that chloroform was “likely to be a carcinogen above a certain dose range, but unlikely to be carcinogenic below a certain dose.” With the 300 ppb MCLG, the USEPA determined the safe level of chloroform in drinking water and applied a 1,000-fold uncertainty factor to ensure an adequate margin of safety. Because this 300 ppb “safe” level is greater than the 80 ppb standard for TTHMs, it suggests further reduction in the TTHMs MCL is unnecessary to protect public health.

Epidemiology & insufficient data
Although epidemiology studies have reported a weak association between bladder cancer and decades of drinking chlorinated surface waters, difficulties in exposure assessment and the long latency of cancer make them difficult to interpret. Thus, the agency concluded in its March 1998 Notice of Data Availability, “that there are insufficient data to conclusively demonstrate a causal association between exposure to DBPs in chlorinated surface water and cancer.”

Also in 1998, an expert working-group convened by Health Canada concluded, “there is insufficient evidence to establish a causal relationship between exposure to chlorinated byproducts and adverse reproductive outcomes in humans.”1 A similar conclusion was reached in 1999 by the Committee on Toxicity of Chemicals in Food, Consumer Products and the Environment in the United Kingdom Department of Health after reviewing the available toxicological and epidemiological record.2 The UK Committee also noted “that available reproductive toxicity studies with some of the individual chlorination byproducts indicate that the levels of exposure to these substances in drinking water are about four orders of magnitude (i.e., 10,000 times) lower than levels at which adverse effects may occur in animals.”

While available studies are insufficient to conclude that DBPs have an adverse effect on reproductive outcomes, they do warrant additional research attention. The Chlorine Chemistry Council has launched a $1.5 million research effort to determine if some high priority DBPs affect reproductive outcomes at low doses. These studies are expected to be finished by the summer of 2001. This research along with USEPA and water industry research will add certainty in determining whether or not DBPs are likely to have an adverse effect on reproduction.

Multiple barriers
While chlorination is often a sufficient treatment for groundwater, chlorine cannot be relied on as the only barrier protecting people from pathogens in surface water. This is why, in recent years, the water industry and USEPA have focused more heavily on a multi-barrier approach to drinking water treatment. Other surface water barriers needed include source water protection, filtration and other technologies, and distribution system integrity maintenance. In some cases, combinations of chlorine and other disinfectants may be needed to further control pathogens, which are resistant to chlorination such as Cryptosporidium. POU/POE devices also can be an additional barrier for consideration to protect against Cryptosporidium. Additional barriers are very important for people with AIDs or other diseases and medical conditions leading to a compromised immune system.

Conclusion
While concerns about disinfection by-products and Cryptosporidium will continue to be issues faced by chlorine disinfection, these matters and the availability of other disinfection methods don’t eliminate the need for chlorination of drinking water. Critically, chlorine-based disinfectants are the only disinfectants used to maintain water quality in distribution systems. For these reasons, additional disinfectants and point-of-use/point-of-entry devices will complement not substitute for chlorine and add additional barriers to protect the public from disease-causing microorganisms.

About the author
Keith A. Christman is senior director of disinfection and government relations for the Chlorine Chemistry Council, an affiliate of the Chemical Manufacturers Association. Both are based in Arlington, Va. Christman can be contacted at (703) 741-5000 or email: keith_christman@cmahq.com