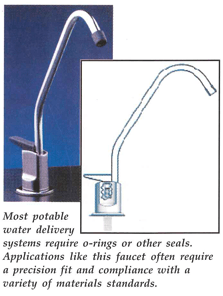 Summary: Chloramines are added to potable water to assist in controlling the undesired growth of microorganisms. Unfortunately, chloramines can wreak havoc with elastomeric seals used in fittings and connectors. This article focuses on the problem of specifying the proper seal for chloramine containing water systems.

In the water treatment industry, design engineers and users of water treatment equipment are inundated with an expanding array of seals and gaskets intended to prevent leakage of the component for long periods of time. Also, Water treatment chemistries are constantly changing, thus requiring new studies of their deleterious effects on seals and gaskets. Consequently, there’s there is a need to better understand the types of elastomer formulations available currently and their resistances to water treatment chemistries, including chloramines, in order to prevent premature seal failures. The purpose of this article is to provide a synopsis of the issues at hand in selecting the most appropriate elastomer for a water treatment application as well as provide some general recommendations when faced with the selection process. 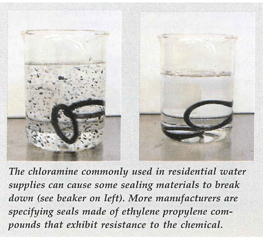 Chloramine chemistry 101
For many years chlorine has been used in municipal water systems as a disinfectant because it’s so effective against bacteria, viruses and other undesirables. Unfortunately, the effectiveness of chlorine wanes after leaving the water treatment plant. The free chlorine dissipates rapidly, by reacting with microorganisms and other contaminants and may even be consumed completely by the time the water reaches our water faucet. Interestingly, this reaction is minimized when other chemicals are added to the water supply in order to tie up the free chlorine—specifically to form chloramines. Chloramines are formed when ammonia is added to water either before or after chlorination. They Chloramines are more stable than free chlorine as well as possess long lasting disinfecting characteristics. Another characteristic of chloramine use over free chlorine is fewer undesirable odor and taste side effects. Also, high levels of free chlorine provide an environment conducive to the formation of carcinogenic halogenated organics in the form of trihalomethanes (THMs) via reaction with natural organic matter (NOM) in the water supply itself. In many areas of the country (i.e., Florida, Minnesota, Texas, California), there has been a move to chloraminate the water supply for reliable long-term disinfection. Chloramines have proven effective primarily due to the fact that they won’t react with the organics in the water supply, thus preventing the formation of THMs.

Chloramines can exist in three forms: monochloramine (NH2Cl), dichloramine (NHCl2), and nitrogen trichloride (NCl3­), sometimes called trichloramine. The proportion of each depends on the physical and chemical condition of the water supply. Chloramines are biocides, functioning in much the same way as free chlorine (Cl2) in that they’re oxidants that kill bacteria by attacking their cell walls and metabolism.

Seal selection 101
In the marketplace today, there are over 20 15 elastomer families that could be considered for use as a seal or gasket in a water treatment application. The best choice of polymer is dependent on the specific application for the water treatment system being designed. With a seemingly innocuous fluid like water, people are often surprised to learn of compatibility problems with seals and gaskets.

(see Table 1) based on years of testing and empirical data in many applications. However, when the discussion turns to chloramine-containing water systems, the best choice for the seal material becomes more difficult to determine. Table 2 summarizes the research done to date on recently

conducted to determine the relative ranking of the various elastomers in contact with chloramine solutions.

Comparing Tables 1 and 2 yields some interesting results. Polymers specified in the past for potable water service may not necessarily be the best choice if chloramines are present in the water supply. The data shown in Table 3 illustrates this very clearly. Even though styrene butadiene rubber (SBR) has been used successfully in potable water applications for many years, the presence of 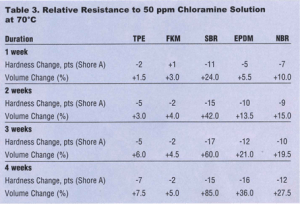 when exposed to chloramines if not compounded correctly (see Table 4). As can be seen in the photograph of the two compounds referenced in Table 4, these effects can be quite severe.

Unfortunately, there’s not a simple test to perform to determine whether the seals you’re currently using are chloramine resistant. Failure mechanisms are time, temperature and chloramine concentration dependent. Recently, the American Society for Testing & Materials (ASTM) D-11 Committee on Rubber created a test method to evaluate relative resistance of candidate compounds (ASTM D6284-98). Table 3 summarizes the test protocol on various polymer families. As can be seen in the photograph, these effects can be quite severe.

This data indicate that a very meticulous evaluation of the seal material must be conducted prior to introduction into a water delivery system where chloramines are used for disinfection.

Conclusion
The data provided here show a number of interesting facts. First of all, the polymers that have historically been specified in potable water applications may not be the best polymer choice in chloraminated environments. Secondly, the undesirable effects of chloramines are more severe than the effects of free chlorine for a given polymer family. Thirdly, even within a polymer family, there are wide variations in the resistance of these materials to the deleterious effects of chloramines. This, of course, speaks to the differences in the compounding ingredients that may be causing a side chain reaction with the chloramines.

The purpose of this article has been to illucidate the need for caution when considering the effective sealing of chloramine containing water systems. The best recommendation is that of caution. The research available today is sufficient to indicate that each compound should be specifically tested for compatibility with chloramines if the total compound composition is unknown. Seal designers should contact their elastomer supplier to discuss the full impact of chloramines on their system to prevent premature seal leakage and subsequent failure in the future.

About the author
Dale M. Ashby is manager of the Material Technology and Research and Development Section for Parker Hannifin’s O-Ring Division in Lexington, Ky. He has been in the rubber industry for 15 14 years. He’s active in numerous technical committees and industry organizations including SAE, NACE, AIChE, ACS, ASTM and the Energy Rubber Group. He has contributed technical articles for a variety of trade journals and industry periodicals. For more information, contact Mark Halloran, promotions manager at Parker Seal Group, (949) 851-3756, (949) 851-2127 (fax) or email: mhalloran@parker.com