Editor’s note: This is Part 1 of columnist David Martin’s annual coverage of the two most important home-based tradeshows of the year. This month, Chicago’s housewares show is discussed; next month, Dallas’ builders show will be reviewed. 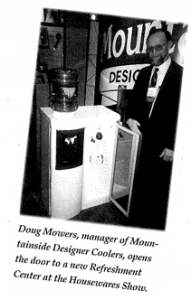 The International Housewares Show and International Builders Show overlapped this year for the first time, mirroring the continuing consolidation of water improvement exhibitors in both industries. Consolidation? Let’s call it a shakeout, with fewer but bigger players competing for slower-growth business.

The Housewares Show, held Jan. 16-19 in Chicago, was mostly a revolving door for brand-name housewares exhibitors who “once tested the water business” but have since gotten out of it.

This year’s show was more notable for all the water improvement market dropouts than it was for new products and players. The aisles of McCormick Place were haunted by the fading memories of past water-related products, no longer seen in the booths of such household names as Rubbermaid, Sunbeam, Salton, Honeywell, Farberware, Nordic Ware and Singer. Smaller, former specialty players including Bodum, Deni/Keystone and William Bounds Ltd. were also among recent water treatment dropouts in a retail field once flush with multiple competitors.

Left in place was a handful of familiar survivors, all water-related specialists except for General Electric (GE) and newcomer Fantom. The marketers that have attained mass housewares distribution are doing fine. The rest cling to the hope of “being discovered” by the right housewares buyers.

Pitcher filters
Thanks in large measure to the marketing leadership of Brita, mass market retail distribution of water filtration has matured, with U.S. household penetration of all devices estimated at 25-to-30 percent.

Industry statistics released by HomeWorld Business and NPD Intellect tell the tale of a flattened segment in 1999. After years of double-digit gains, pitcher filter sales in dollars actually declined slightly to $71 million, from $74.6 million in 1998. The fact that unit sales grew to 4.18 million from 3.98 a year ago was small consolation for pitcher marketers faced with the grim reality of declining retail prices and fading profits.

Brita reigns in pitchers with an es-timated 75 percent share—and it has earned it. Building the brand over the last 10 years, with an annual advertising budget of more than $30 million, has made Clorox’s brand the entry-level water filter of choice with American consumers.

Pur filters—recently bought by Procter and Gamble (P&G)—are the closest competitor. Culligan is third and recently dropped its glass pitcher model. WAL pursued a private-label strategy for more than a year with little to show for it. No new pitcher competitors surfaced this year. Rubbermaid and others have come and gone in what now must be perceived as a mature niche.

The focus has shifted to replacement cartridge sales, where price competition could be fierce. Culligan is offering “universal” cartridges, said to fit both Pur and Brita pitchers. Suggested retail is $5.00 each and $14.99 for a three-pack. In this competitive climate, other filter prices can be expected to drop this year.

Three familiar names represented the retail retrofit faucet filter category in Chicago. For the first time in years, the category has stopped adding new features. Price points are now paramount. Pur is standing pat for now with its familiar product line, said to be the national sales leader in both hardware and mass merchant distribution, although speculation abounds about when and how P&G plans to flex its muscles with its new acquisition. Brita began shipping its first faucet-mount filter with electronic filter replacement indicator last summer and has the potential to become a category leader in 2000. Water Pik Technologies, now an independent spin-off from Allegheny Teledyne, showed the same filter trio as last year, starting at suggested price points ranging from $10-to-$24.95. Water Pik created the first end-of-faucet water filter a quarter century ago. Its electronic faucet filter, introduced in 1998, remains the only filter that measures both “elapsed time” and “gallons used.”

Health claims for retrofit faucet filters have included lead, cysts and even volatile organic compounds (VOCs) in recent years. A year ago, Culligan claimed bacteriostatic protection as well for its unique two-stage FM-5 and FM-7 filters, first seen at the 1999 Housewares Show. The two units have now been reintroduced with NSF certification for bacteriostasis, but won’t be sold in Iowa, Wisconsin and California—states that don’t allow bacteria reduction claims. Prices range from $34.99-to-39.99.
Continuing pressure from retailers to deliver sophisticated faucet-mount filters in volume—and at low cost—makes this segment the most challenging for new players. No new competitors emerged in Chicago.

Countertop appliances
Countertop water improvement appliances have long been a staple of direct sales channels but have never broken above 3 percent of total U.S. retail market penetration. This may be due to Americans preferring not to add “countertop clutter” to precious kitchen real estate when they can opt for faucet filters, pitchers or even undercounter models that won’t get in the way. According to NPD Intellect, retail countertop unit sales were 1.4 percent in 1999 (3 percent of dollar sales).

In spite of this problem, at least five companies showed countertop units at the 2000 Housewares Show. Culligan and H2O International showed carbon filter countertops that combine granular activated carbon (GAC) carbon with KDF redox media. Talhin/T Corp. showed its unique slim-profile countertop filtration unit that actually fits behind most faucets. Called “Aqua Life,” the unit is also available in an undercounter model, according to J.D. Jackovich, who said that both units will soon be available at Home Depot.

Two companies showed appliance style countertop distillers, both with carbon post filters. The Genesis unit is available through catalogs. The second distiller is a new entry in batch water purification from Burton Inc. The new Burton unit will retail for under $120 and features a “refill and reset” LED indicator.

A new “ozone” countertop appliance debuted in Chicago from Fantom Technologies, a Canadian company known for its line of vacuum cleaners with HEPA air filtration. Fantom’s Calypso water purification system incorporates activated oxygen or ozone to kill waterborne microorganisms. Set to ship in the spring of 2000, the unit is said to also remove a wide range of VOCs. The batch-fill corona discharge unit contains a computer-controlled monitoring system to ensure the dispensed water is disinfected. Fantom plans to take the Calypso to the WQA Convention and Trade Show this month in Long Beach, Calif.

Holmes Group, a consolidator of several familiar houseware industry brands including Rival and Polinex (both formerly in point-of-use, or POU, filters), has introduced a new Polinex KDF-55 shower filter said to retail from $35-to-39.99. H2O International showed its RioVita KDF-55 shower filter with pop-in cartridge and LED filter change indicator.

Culligan and Brita both debuted new entries in the portable filter bottle category at the 2000 Housewares Show. Culligan showed sports bottles in 16-, 22- and 24-ounce sizes. Its replaceable filter cartridge is said to be the only one that removes lead as well as improves taste, color and odor. Slated to ship to retailers in the spring, Culligan is hoping the category will open up new classes of trade including sporting goods, fitness and wellness retailers. Suggested retail prices are $4.99 for the 16-ounce bottle, $5.99 for the 20-ounce and $7.99 for the 24-ounce bottle. Culligan also introduced a two-liter travel pitcher, priced at $9.99.

Brita hopes to leverage the wide acceptance and distribution of its filter pitchers, with the introduction of the Fill ‘N Go water filtering sports bottle. The 700-milliliter polyethylene bottle is fitted with a carbon block filter certified for taste, color and odor. The push/pull-cap bottle is expected to retail for $7.99. A 15-gallon replacement cartridge will sell for about $3.49. Units will be displayed alongside other Brita products. Sporting goods retailers and convenience stores are other targets.

Other exhibitors
American Water Service introduced the new PurTest Pesticide Kit. President Don Podrebarac said the new kit is a “fast, easy and economical test that detects triazine pesticides as low as 3 ppb (parts per billion).”  The company will introduce the first home test for arsenic at the WQA show in March. It will also introduce to water treatment professionals a new line of Bottle Test Strips for pH, copper, alkalinity, hardness, nitrate and nitrite, chlorine and iron, says Podrebarac. “PurTest is the first national brand in water tests. Our products will be available in over 20,000 locations in the U.S. by the end of this year,” he said.

Conclusion
The long-coming shakeout of retail water improvement players was very apparent at this year’s annual International Housewares Show; not only did more players exit water treatment appliances, there was a striking lack of new ones this year for replacements. Price points are lower than in the past, yet advertising drives the success of the leaders. New product claims were minimal, suggesting a maturation of product features and consumer benefits. The price of admission to this now exclusive club has decidedly risen. Few will be willing or able to “buy the business.”

About the author
David H. Martin is a marketing consultant and partner in Lenzi Martin Communications, a Chicago-based marketing firm focusing on products which protect people’s personal environment. He can be reached at (708) 848-8404, (708) 848-9062 (fax), or email: newage@mediaone.net