Summary: A lot of new rules on everything from lead and copper to radon to arsenic are coming out this year from the USEPA as required by reauthorization of the Safe Drinking Water Act in 1996. The following is a discussion of how dealers can respond to one, the new Arsenic Rule.

The Office of Water of the U.S. Environmental Protection Agency (USEPA) has been charged by the Congress to re-visit the rules governing the maximum contaminant level (MCL) for arsenic in drinking water. The new rules were due in early January 2000, but reports indicate that they may not be released until April or May. As professionals in the water treatment industry, we need to be aware of these proposed rule changes and their possible impact on our business.

Current standards
The USEPA’s current MCL for arsenic is 50 parts per billion (ppb), or micrograms per liter (µg/L). This level was set initially by the USEPA in 1975 as an interim standard. It was converted to an MCL by the Safe Drinking Water Act (SDWA) in 1986. The World Health Organization (WHO) has set their recommendation at 10 ppb—down from 50 ppb. The basis for the recommendation to lower the current standard is based on National Research Council (NRC), a branch of the National Academies of Science, assessments of the risks of skin, lung and bladder cancer from drinking water containing inorganic arsenic. The report also describes potential risks of cardiovascular effects.

The new MCL must also take into consideration factors such as the availability of appropriate analytical methods, the efficiency of treatment technologies for all sizes of public water systems, the cost of treatment options and the health benefits achieved by different levels of arsenic reduction in drinking water. The USEPA must identify affordable small system technologies. The current arsenic MCL only applies to community water systems, such as those supplying houses, apartments, mobile home parks and condominiums. The new MCL would also apply to non-transit, non-community water systems, such as those supplying schools, office buildings, resorts and restaurants. We expect to see a dramatic impact on certain municipal water systems when the new rules go into effect, namely regional pockets where arsenic is naturally present in drinking water supplies. USEPA sources indicate that the final rule is likely to wind up between 5 and 10 ppb.

Laymen’s terms
So what is arsenic anyway? We have all heard of it. However, if we were asked what it is, could we answer intelligently? Arsenic is a semi-metallic element. Its chemical symbol is “As.” Its chemical makeup and reactivity is similar to nitrogen, phosphorus, antimony and bismuth, according to arsenic’s place in the Periodic Table of Elements.

In laymen’s terms, Arsenic is a naturally occurring element on the planet and, in the United States, is readily found in New England, the upper Midwest (Michigan, Minnesota, South Dakota) and the Southwest region of Arizona, New Mexico and Nevada. Even though arsenic isn’t found in abundance in the planet’s crust—it ranks 52nd, between tin and molybdenum—its concentration due to human activity makes it the third most common regulated inorganic contaminant.

Since the turn of the century, arsenic has been used in many industries. It was originally used in the formulation of pesticides and herbicides for farming. Widely used in the raising of blueberries, apples and potatoes during the first half of this century as well as a dip for sheep and cattle to control ticks, its use was greatly restricted after the 1960s. Currently, arsenic is used in the decolorization of glass, paint manufacturing, treatment and preservation of wood; in metallurgy to improve the roundness of lead shot; and it’s even used as a pharmaceutical in the treatment of amebic dysentery—also known as Traveler’s Diarrhea.

As+3 v. As+5
Arsenic has an interesting chemistry when found in groundwater. It can combine with other elements to form inorganic as well as organic compounds. The inorganic derivatives are considered more toxic than the organic forms. These inorganic 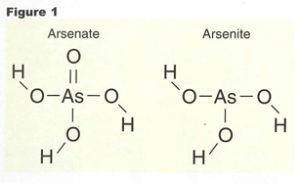 forms exist in potable water in one of two states, As+5 called arsenate and As+3 called arsenite (see Figure 1). Arsenic in water forms many different compounds, all of which are anionic or non-ionic (neutral charge).

Arsenic is, however, easily oxidized and readily changed between the two forms through chemical and biological reactions common in the environment. The two conditions that dominate the behavior of arsenic are redox (oxidation) and pH. Generally, aerated surface water contains arsenate and reductive well water contains arsenite. When the pH of water is between 2 and 9, then arsenite prevails; pH in the range of 7 to 11.5 supports arsenate. However, lab experiments are not always indicative of real life. When dealing with arsenic, we must assume that both forms are always present.

Treatment options
What can be done if a high level of arsenic is found in our water? Many drinking water sources, again, particularly in the West, exceed 20 ppb of arsenic. We recommend you stop using that water immediately for drinking and preparing food. Do not boil the water in an attempt to remove the arsenic. This will only result in concentrating the present level. There are several point-of-use (POU) treatment systems that can be implemented. The Water Quality Association suggests the following as suitable treatment techniques: activated alumina, distillation, reverse osmosis (preceded by chlorination), electrodialysis, anion exchange and coagulation with filtration. Best results occur when arsenic is in the As+5 form. As+3 can be converted to As+5 through oxidation. This can be done with any conventional oxidizing agent, e.g., chlorine, hydrogen peroxide or potassium permanganate, and/or ozone or ultraviolet irradiation at the 185 nanometer—or ozone producing—wavelength.

Distillation
Distillation is effective for both arsenate and arsenite removal. Water is heated to steam and then the steam is condensed back into water. Currently, distillation is the only standalone POU technology with NSF International certification for arsenic removal, under Standard 58.

Activated alumina
Activated alumina may be an acceptable choice for some larger systems. These filters can reduce influent levels to less than 10 ppb with a fairly large capacity. To reach this level of treatment certain conditions must be met. The empty bed contact time should be 3-to-5 minutes with a maximum flow rate of 1.5-to-3 gallons per minute (gpm) per cubic foot. The pH should be adjusted to 6.5-to-7 using sulfuric or hydrochloric acid. Activated alumina is very selective toward As+5 and should be regenerated with caustic (sodium hydroxide) and neutralized with acid. Filters should last an average of 1,000 filter volumes or 1,000 quarts for a one-quart media filter.

Anion exchange
Anion exchange may be a viable treatment for arsenic. Again, arsenite must be oxidized to arsenate for effective removal. Remember that anion resin can not tolerate chlorine. This can be removed with a granular activated carbon (GAC) filter. These exchange systems are configured like softeners except anion resin is used. Type I and II anion resins can be used; however, pH must be adjusted to 7 or below. Sulfates will compete with the arsenic ions for exchange. Take this into account when sizing the resin bed. Regeneration can be accomplished with a brine solution.

Media filtration
Manganese greensand filtration can remove arsenic with iron or manganese present in the water. Potassium permanganate is added to the water. This helps convert the As+3 to As+5. The arsenate then complexes with the iron or manganese salt to form a precipitate and the filter removes it. However, if the arsenic does not form this precipitate, it will pass through the filter. In past tests, arsenic removal rates have been between 90.4 and 98.1 percent.

Other treatments include coagulation with Alum (aluminum sulfate). If the pH is under 7, arsenic can be removed in the range of 90 percent  if first converted to As+5. If the pH is over 11, then lime softening could be used. This can remove up to 80 percent of the pre-oxidized arsenic.

Reverse osmosis
The most common solution for POU arsenic removal is reverse osmosis (RO). RO can reduce arsenic levels by 90 percent if configured properly. Systems using a chlorinator will require at least one minute of contact time to complete oxidation. The chlorine will need to be removed with a GAC filter to protect thin film composite membranes from oxidation. Studies are currently being done to prove this technique with chlorine and other oxidants.

Other factors
To achieve the new MCL for arsenic, two or more of these treatments may need to be used together. Remember that these treatment systems won’t make the arsenic disappear. They will only concentrate it into a side stream, place it in a resin bed or on a filter media. Please check local regulations when dealing with effluent or other disposal means required.

What will the MCL mean in terms of cost? As the MCL decreases, costs of treating the water to meet that MCL will go up exponentially. The 1995 USEPA regulatory cost analysis projects that lowering the MCL to the 2-to-20-ppb range would increase costs to over $1,100/household/year from $100/household/year at the current MCL of 50 ppb.1 These costs will have to be borne eventually by the general public. Some small systems may not be able to finance this type of project. We would expect that funds will possibly be available to assist small systems, i.e., from federal revolving loan programs, etc., in the near future.

Conclusion
So what does all this mean to you, the water treatment dealer? Well, it should mean two things. It means there’s an opportunity for us in the industry to sell our products and services for the removal of arsenic. It also means that we have an obligation to the public we serve to be informed and ready to help if arsenic is a problem in our area. It’s too easy to say, “Well, we don’t do that kind of treatment,” and let it go at that. If we consider ourselves the water treatment experts in our community, we must be ready and able to help our customers in whatever area is required.

About the authors
Bill Hall is chief executive officer of Amigo Enterprises Inc. of Azle, Texas, near Fort Worth. He is a consultant to the water treatment industry and has a long history of technical experience, including writing on a number of occasions for WC&P. He is active with the Water Quality Association and serves on several committees.