Summary: With the 1996 reauthorization of the Safe Drinking Water Act, ozone was named as “best available technology” (BAT) for small system compliance to National Primary Drinking Water Regulations as overseen by the USEPA. Since the majority of systems not in compliance are small systems, this makes the market a narrow niche that can be exploited by those dealers with expertise in ozone and other such approved technologies.

In the May 1996 WC&P article, “A Swap Meet of Water Treatment”—precursor to this article—we described a pilot testing program and the decision-making process for a community water treatment system.1 From this pilot evolved a full-scale ozone and filtration plant that went into 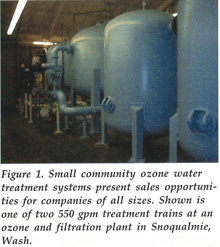 service in April 1998. This system has two treatment trains with a combined service flow rate of 1,100 gallons per minute (gpm), and expansion planned for a future build out to 1,600 gpm (see Figure 1).

I thought it might be interesting to compare the study results in 1996 with the full-scale plant’s current performance almost four years later, and see what it might mean to water treatment companies—especially those contemplating working with ozone.

For the 1,100 gpm system design, the 0.65 mg/L ozone-to-water dosage rate was used, with an applied dosage plus a redundancy “safety” factor totaling 6.2 pounds per day ozone production 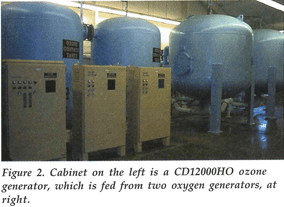 Pilot filtration rates were set at 5 gpm/ft2 largely based on a Washington State Department of Health preference. The filtration media in both the pilot and final plant was multimedia with a top layer of 30-inch Birm made by Clack Corp. This same filter loading rate was applied for the full-scale plant. Four, 8.5-foot diameter epoxy-lined steel tanks 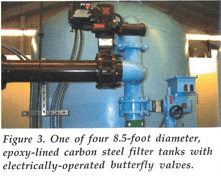 holding the Birm were installed, following stainless steel contact vessels which provide approximately four-minutes retention time for ozone oxidation and floc formation. The four stainless steel contact vessels and four filters—two each per treatment train—were designed for and pressure tested at 200 psi (see Figure 3). The reason for the high pressure is the system feeds to a reservoir on a mountain. 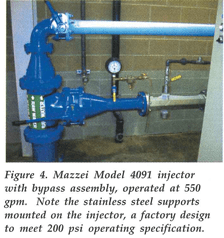 Water analyses for manganese from the full-scale plant consistently have been well below the MCL, demonstrating that sizing calculations developed during the pilot study were right on target. Iron levels during the past year are at or near non-detectable levels and manganese in the filtered water ranges from 0.02 mg/L (May 1998) to non-detectable (August 1999).

Looking back, these data clearly demonstrates that ozone and filtration technology has wide-ranging application and its scale up ability is proven. There’s a direct relationship between dosage rates and sizing, from the very small system at 5-to-7 gpm (typical of a single family home) to the larger municipal systems producing greater than a million gallons a day (mgd). As such, one can easily envision that a company now involved in water treatment for point-of-entry (POE) systems in single-family homes cannot only offer effective treatment with ozonation, but also can expand his or her business into the small community water systems.

There’s a very large and viable niche for even small water treatment companies to offer ozonation technology for small communities and municipalities.

Market size
I suspect no one truly knows the exact size of the U.S. water treatment market in small communities, but there are some guidelines that offer a more specific definition of how they’re quantified. The number of small community systems now regulated has been stated by various reports from the states and the USEPA. One report suggested there are about 55,000 regulated small community water systems, but a recent USEPA report indicates a more realistic number in excess of 200,000.2

This larger number is expected to include all mobile home parks, campgrounds, resorts, rural hotels and motels and other public water systems in the United States. However, the USEPA defines “Public Water Systems” as having at least 15 connections or serving 25 people for at least 60 days per year.3 If one looks at the various states, however, there is ample evidence the number of small community systems is even greater. Washington State, for example, defines public water system to include those having two or more connections. Thus, the estimate of 200,000 may be vastly low. Regardless of the accuracy of the figure, this is still a colossal market.

Regulation driven
USEPA and state regulations are helping drive this niche market. Additional requirements—including those related to surface water and groundwater under the influence of surface water, combined with Disinfection By-Product Rules—clear the way for expanded ozone use. Groundwater systems are faced with a number of secondary contaminant rules, including iron and manganese limits, for which ozone and filtration are quite effective and cost competitive.

The USEPA has identified ozone as “Small System Compliance Technology” under the Safe Drinking Water Act.4 Over 3,000 large-scale municipal systems use ozone worldwide and the U.S. trend is toward greater use of ozone, with about 260 small domestic water systems (less than 1 mgd) using this technology, as of 1998.5 This number is expanding as this niche market opens up. Federal regulations not only permit use of ozone, but in several instances, such as Cryptosporidium and Giardia treatment, ozone may be among the best technologies available.

At the state level, however, issues may be a little cloudy, but can be clarified with some patience and effort. In most if not all states, a water treatment project for community systems requires an engineering report and government approval. Whenever “unfamiliar” technology is introduced, regulators may be reluctant to approve it. So, in jurisdictions where ozone systems have not been approved, special attention to the approval process is required. Providing data, literature and an “ozone-system checklist” to the state and local regulators has proven an effective way to get them up to speed and get projects approved without undue delays.6

Quality is paramount
Because ozone is a gas that must be manufactured on site, all ozone production systems will require certain components—an air preparation unit, ozone generator, controller, ozone injection system and contactor. Ensuring these components are of commercial/industrial quality and meet electrical safety standards is paramount. Even though the industry is trying to eliminate such practices, there are still a few small companies promoting inferior-quality ozone generators. To avoid this potential, check references of suppliers and insist on written proof of ozone output as well as compliance with electrical safety standards. 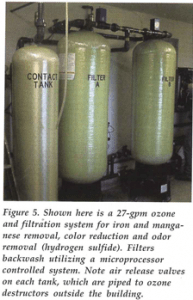 The learning curve
The learning curve for ozone system design and sizing is a consideration when expanding into the small community treatment market because there are some subtleties in applying ozone and sizing systems which must be understood well.

Guidelines are available from a number of sources, including the American Water Works Association (AWWA), Water Quality Association (WQA) and the International Ozone Association (IOA). Some ozone equipment manufacturers will help, but many of these companies are limited in their field experience in this market. Working with an experienced consultant who can provide strong references—and who’s completed projects of the size and type you are contemplating—is probably the quickest, most cost-effective way to get up to speed in this market. And, keep in mind pilot testing before final design can save a lot of headaches later on.

Conclusion
An ozone and filtration system must be sized correctly based on treatment goals and flow rates. A typical system, whether treating at 2 gpm or 1 mgd, is based on the same components, all of which must be safe and reliable. Effective ozone-to-water transfer is a key to success. Contact time is required for the ozone oxidation and micro-flocculation to occur, or for oxidation and disinfection. Filtration sizing is based on filter media selection, contaminants to be removed and recommended loading rates.

Regardless of these considerations, even a small water treatment company should not be afraid of jumping into the small community system market. Profits should be greater than with the single-family home units, and often working with a homeowner for a 5 gpm system is almost as time consuming as working with an engineer to offer a half-million-dollar municipal system.

About the author
Kenneth Larson is president and CEO of Environmental Water Solutions Inc. of Bothell, Wash. The company, having supplied equipment and support for over 50 community water treatment plants, specializes in consulting and systems integration for ozone and filtration in the small community water treatment markets nationwide. As such, one of its products to that end is the Filter Wizard, a microprocessor controlled system to control filter backwash. Larson can be reached at (425) 483-2710, email: ewsi@gte.net, or through its webpage: www.ozone-ews.com