Any business that purchases fixed assets incurs a depreciation expense. That expense recognizes the periodic deterioration in those assets as they’re used in the firm’s operations over their useful life.

This apparent anomaly confuses many business owners. After all, a business expense usually represents a cash outlay. Moreover, the cash benefit that develops from the depreciation process doesn’t appear as an obvious increase in a firm’s bank account. Instead, that benefit is obscured by the daily fluctuations in the firm’s cash receipts and disbursements.

This article will attempt to eliminate the confusion and show how depreciation becomes an apparent source of cash for a business. We’ll center the discussion on a fictional company, the KBA Company.

Accounting value
KBA began in early 1996 with a $180,000 cash investment in the equipment necessary for its operations.

However, KBA didn’t incur an expense on the day the firm purchased that equipment. Instead, the original purchase represents an exchange of assets. KBA traded $180,000 in cash for equipment worth $180,000. The accounting value of the firm’s total assets remained the same. Only the composition of those assets changed.

Of course, a business does incur an expense when it actually spends—i.e., uses up an asset. Accountants use the depreciation account to recognize the expense a business incurs as it uses up its fixed assets. However, as emphasized above, the cash that pays for a firm’s fixed assets leaves the business when the firm subsequently recognizes the periodic depreciation in those assets. That makes depreciation a non-cash expense.

Recovery allowance
At the same time, a depreciation expense has the same impact on an income statement as any other business expense. It

represents a logical, legitimate charge against a firm’s revenue. Depreciation reduces a firm’s earnings. A look at KBA’s operating results for its first business year clarifies these facts.

During that period, KBA generated $60,000 in earnings before recognizing the depreciation expense arising from its equipment. The equipment fits in the Internal Revenue Service’s determination of a 5-year class life for tax code purposes. KBA placed the equipment and began operations on March 15, 1996. Salvage value of the equipment isn’t considered. So, the firm’s depreciable basis is $180,000.

Depreciation has the same effect on earnings as any other operating expense. After recognizing that expense, KBA found that its net income was $24,000, well below the $60,000 measured before the depreciation expense.

But the lower earnings total doesn’t reflect the true cash flow generated by KBA’s operations. The firm actually gained $60,000 in cash for the year. Two unusual facts about KBA’s operation help clarify the picture of that gain.

First, the KBA Company operates strictly on a cash basis. The firm pays cash for all purchases and operating expenses. And KBA sells only for cash. So, the firm has no accounts receivable. Nor does it accrue any liabilities.

Those convenient facts enable us to isolate the cash that comes from KBA’s depreciation expense by comparing the firm’s beginning and ending balance sheets for the year:

Consistent with the earnings level of the firm’s operations, we see that the owners’ equity in the KBA Company increases by $24,000 from the beginning to the end of the year.

Only two changes occur in the firm’s financial condition. Cash increases from $10,000 at the beginning of the year to $70,000 at the end of the year. That matches the total of the firm’s earnings plus depreciation.

Also, note that the depreciation process reduced the accounting value of KBA’s fixed assets from $180,000 to $144,000. That pinpoints the apparent source of the $36,000 out of the $60,000 increase in cash for the year. The other $24,000 comes from the firm’s earnings. No new cash flowed into the firm because it incurred a depreciation expense. Instead, less cash flowed out than KBA’s income statement suggests.

To reaffirm this, let’s take a look at KBA’s actual transactions during the year. Remembering that KBA operates strictly on a cash basis, we need only to note that the firm generated $1 million in sales and paid out $940 in cash for purchases and operating expenses.

The firm’s cash flow for the year then appears as follows:

Of course, depreciation does not actually create any new cash for the business. KBA paid out $180,000 in cash as part of the original equipment acquisition. But no cash left the business to pay depreciation expense during the period covered by the income statement.

Tangible cash benefit
We also should emphasize another fact about the impact depreciation has on the cash that develops from a firm’s operations. That is, depreciation does become a real—rather than an apparent—cash shield for the business that operates profitably. Those non-cash expenses reduce a firm’s reported expenses and lower its actual income tax obligations. 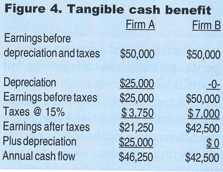 To illustrate that tangible cash benefit, let’s compare two similar businesses, designated as Firm A and Firm B. Both businesses produce $50,000 in income before depreciation and taxes. To simplify discussion, we assume both incur a 15 percent income tax assessment on their earnings. The only significant distinction between the two is that Firm A has $25,000 in depreciation expenses while Firm B has none. That difference leads to the following view of the firms’ comparative operating results:

The total cash flow that develops from a firm’s operations includes a $3,750 higher annual flow, despite having the lower net income total. The difference develops from the $25,000 in income shielded by Firm A’s depreciation expense. This non-cash expense saves $3,750 in taxes, which eventually shows up in the firm’s annual cash flow.

Conclusion
Finally, recognize that viewing depreciation as a source of cash for a business is more than an intellectual exercise for bored accountants. The annual cash flow a business produces—i.e. the total of its net income after taxes plus depreciation—provides an important measure of a firm’s ability to meet its debt obligations or expand its operations. Assessing the potential cash flow from either makes the proper view of depreciation as a source of cash a major management concern.

About the author
Joseph Arkin holds a BBA degree from St. John’s University in accounting and MBA degree in taxation from Pace University. He is licensed by the states of New York and Florida as a Certified Public Accountant, and has previously written for several trade and professional magazines.