Removal of Cryptosporidium parvum from Water by Filtration

Summary: Over the past 15 years, the water industry has recognized the presence of two protozoan parasites in raw waters—Cryptosporidium parvum and Giardia intestinalis (also known as Giardia lamblia). This has lead to an increased research effort into detection methods including a focus on the effectiveness of existing water treatment processes for removal of these organisms. Filtration is one such method.

It’s now known that Cryptosporidium is widespread in the environment and as a result many surface and some underground sources of drinking water are now regarded as potentially vulnerable to contamination. The presence of Cryptosporidium has been reported from many parts of the world where tests have been undertaken.

Although Cryptosporidium and Giardia often occur together, it’s recognized that Cryptosporidium poses the greatest threat to potable water supplies. Most of the major outbreaks have been attributable to this organism rather than to Giardia. The Cryptosporidium oocyst is smaller than the Giardia cyst—4-to-6 microns (µm) as opposed to 10-to-16 µm, and therefore more difficult to remove by filtration.

Crypto characteristics
C. parvum is a protozoan parasite with a wide range of hosts. It can infect many warm-blooded animals, including farm animals, domestic pets and humans. Infection is by the oral route and transmission via contaminated food, drinking water, swimming pool water or even sexual activities.

On entering the body, the organism passes through the stomach and becomes established in the intestine where it multiplies, ultimately resulting in the production of large numbers of resistant oocysts that are eventually excreted in the faeces.

The largest outbreak in terms of numbers suspected of being ill occurred in 1993 in Milwaukee with some estimated 400,000 infected and 100 deaths reported. In 1989, in Oxford, United Kingdom, another outbreak placed 5,000 people at risk and 400 required medical treatment. Media attention has also focused on outbreaks in London, Las Vegas, Austin, Texas, and Alpine, Wyo., in recent years. One reported in Sydney, Australia, in 1998 in fact was later determined to have been a false scare.

Infection in humans can result in prolonged sickness lasting from a few days to as long as six weeks. Not all of those infected become ill. For those with weak or weakened immune systems, it can be life threatening. The attack rate may vary from 60-to-86 percent, however the infection is usually self-limiting.

Commercial implications
The risk from Cryptosporidium to commercial businesses, particularly those producing drinks, foodstuffs or medicines for human consumption is dependent on a number of factors. These include the source of water, the treatment it has received and the potential for Cryptosporidium oocysts to gain access to the water. If oocysts are present in the water then the risks of causing illness are dependent on the number of organisms present, their viability and the ability of the commercial production process to kill or remove contamination.

Removal of Crypto
It is the erratic occurrence of Cryptosporidium in raw water sources combined with the requirement to reduce the numbers of oocysts to a very low level in treated water that makes it essential to have adequate treatment processes. The latest regulations proposed by the UK government specifies that, in drinking waters, concentrations should be less the 100 oocysts in 1,000 liters (L).

The traditional approach to removing microbial contaminants from water has been to employ a variety of treatment processes to gradually reduce their numbers and then to apply a final chemical disinfection. However with Cryptosporidium, chlorination as a final disinfection treatment is ineffective as the majority of drinking waters are treated with chlorine at low doses of about 1-to-3 parts per million (ppm). The dose required to kill oocysts is in the order of 1,000 ppm—an impractical treatment regimen. This, among other characteristics of Cryptosporidium places a reliance on physical treatment processes such as settlement, flocculation, clarification and filtration.

The Cryptosporidium oocyst isn’t invulnerable as it’s easily killed by heat. Ozone and ultraviolet (UV) light offer some disinfection capability. However, it’s difficult to demonstrate whether these treatments have been effective with current methods. Laboratory detection methods which are able to differentiate between infectious and non-infectious oocysts are required; and, while some procedures based upon infection of tissue cultures or molecular methods have been developed, they’re not yet robust enough for routine use. At present, the only way of ensuring removal from water is by means of high-grade filtration.

Filters and Crypto
The following is a report on a challenge to a selection of filters using high numbers of viable Cryptosporidium oocysts under realistic conditions to measure their retention properties.

Filter properties
Microfiltration removes suspended contamination for gas or liquid systems in the size range of 0.01-to-100 µm. The filters employed to achieve this can be divided broadly into two categories, depth and membrane filters, based upon their structure and methods of retention.

Depth filters
Depth or media filters consist of melt-blown or spun-bonded polymers produced in filter materials of 1,000-to-2,000 µm in thickness. Particulate or microorganism retention takes place both on the surface and predominantly within the depth of the filter media. Retention is based on inertial impaction and absorption of particulates or microorganisms as they’re carried through the tortuous filter path of the media.

Depth filters are generally rated on their ability to retain inert particulates and membrane filters are rated on their ability to retain microorganisms. Cost effective filtration is characteristically achieved through use of a depth/media filter upstream of a membrane filter, which may or may not be the final filtration step depending upon the quality of water desired. 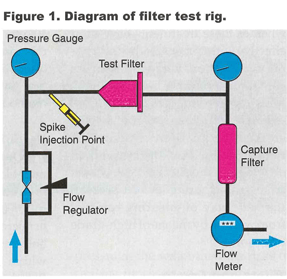 Figure 1. The equipment and procedure were designed to permit filters to be tested under conditions expected to occur during normal operation.

For experimental purposes, it was necessary to make two compromises. The first was in the number of oocysts in the challenge dose. To permit a full evaluation of the ability of the test filters to remove oocysts, it was necessary to challenge the filters with a much higher concentration of oocysts than would ever be found in any water supply–to produce a worse case scenario. The C. parvum oocysts were obtained form the University of Arizona and were purified from calf feces and live, i.e., they were not inactivated before use.

The second compromise was in the use of AC test dust to block the test filters. This material was chosen as it’s a well-defined material and is in general use in testing filters.

Capture of oocysts
Oocysts that passed through the test filters were collected by membrane filter capsules downstream of the test filters. Capture filters were changed at each stage of the filter test trial then transferred to the laboratory where they were extracted and counted using methods essentially described in USEPA Method 1622.

Enumeration of oocysts
A laser scanning procedure using the ChemScan RDI instrument 9 was used to determine the numbers of oocysts present in both the extracts from the capture filters and the original challenge inoculum, or challenge dose inoculated into the water before filtration. This method was chosen as it gives unprecedented accuracy in the determination of oocyst numbers.

For the protocol on the manner in which the test was conducted, see Figure 2.

Results
Figure 3 below shows the percentage of oocysts removed by the relevant filters. The

Conclusion
All filters tested were capable of reducing the numbers if oocysts in the filtered water. The reductions were greatest with finer grades of depth filters and the membrane filters. The 0.65-µm and 1.2 µm membrane filters provided complete removal, i.e., greater than 99.99999 percent retention.

Treatment of a water supply with a combination of a depth filter, to remove the bulk of particulate material, and a membrane filter, for final capture, would ensure a high degree of protection from waterborne oocysts including Cryptosporidium and Giardia.

Thames Water Utilities Ltd. are respected world leaders in the understanding of Cryptosporidium and has the latest detection methods available. R.B. Slade and J.S. Slade, both formerly of Thames, also contributed to this article. J.S. Slade has since retired. R.B. Slade is no longer with the company.

About the authors
Dr. Colin R. Fricker is microbiology manager at Thames Water Utilities in the United Kingdom and obtained his doctorate in microbiology from the University of Reading, England. He’s authored over 100 scientific papers and is actively involved in development of new methods for detection of microorganisms in water. He was awarded the W.H. Pierce price for “Outstanding Contributions to Microbiology” by the Society for Applied Bacteriology in 1986 and is a member of the American Society of Microbiology, American Water Works Association and International Association for Water Quality. He can be reached at +(44) 118 923-6311 (fax) or email: CFricker@compuserve.com