Summary: There are advances being made all the time in laboratory testing methods to not only improve detection techniques, but to add to the ease and convenience of the processes. The following method is ideal for bottled water and other applications where quick, convenient determination of contaminant levels is crucial. 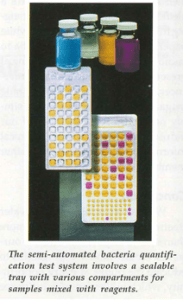 Maximizing efficiency is one of the keys to survival in today’s competitive commercial laboratory industry. Successful environmental laboratories have been cutting costs by automating chemistry testing for years. Examples include automated sample handlers, robotics, database management systems and walk-away analytical platforms. Now, as competitive pressures continue to rise, leading laboratories are starting to focus on ways to increase efficiency in the microbiology laboratory.

Traditional microbiology methods have included cleaning glassware, preparing media, diluting samples, incubating tests, counting colonies or positive tubes and then repeating this cycle for confirmatory steps. One sample could result in dozens of test tubes being handled over the course of up to five days for a single confirmed result. The multiple tube fermentation approach used today for coliform testing was invented in the 1800s, and the membrane filtration approach was introduced in the 1950s. Compared to new rapid methods, these previous testing methods can be slow, labor intensive, subjective and highly susceptible to technician error. Leading environmental labs are moving toward new rapid methods to reduce their costs and accelerate sample turnaround.

One such rapid method is a semi-automated bacteria quantification test system, which involves a sealable tray with various compartments for samples mixed with reagents for detection and quantification of particular contaminants. The system was introduced in 1994 and approved by the U.S. Environmental Protection Agency (USEPA) for coliform testing in 1995. It has since been accepted for compliance testing by a dozen countries in the Americas, Europe and Asia, including Canada, the United Kingdom and Australia. It’s also included in the 20th edition of APHA Standard Methods for the Examination of Water & Wastewater, published in 1998. Since its introduction, hundreds of laboratories around the world have installed this system.

The tray system uses three different reagents to quantify total coliforms and E.coli in just 18, 24 or 28 hours, respectively. This system can also be used to enumerate enterococci in just 24 hours with another reagent. The system requires less than one-minute hands-on time per test, and the sealer will seal up to four trays per minute. This frees up technician time and allows more samples to be tested in less time. The steps are as simple as adding the reagent to the sample, pouring it into the sample tray, running the sample tray through the sealer and incubating.

This new technology is based on the traditional MPN statistical model used for years in APHA Standard Methods. M multiple tube fermentation (MTF), which involves pipetting one or more dilutions of a sample into test tubes that are then incubated. The number of positive tubes is converted to a most probable number (MPN) based on conversion tables. The MPN, or most probable number, model involves a quantitative assay method that divides a sample and assesses each for positive occurrence. Based on that, MPN tables are used to establish a probable contamination level for the original sample. However, the new system overcomes the three most common complaints associated with the traditional multiple tube fermentation (MTF) MPN method: 1) labor intensive test preparation, 2) low counting range which requires making several dilutions, and 3) very broad 95 percent confidence levels.

Although the system uses the same MPN statistical method as this traditional approach, it turns these three weaknesses into strengths. First of all, because the sealer automates sample handling, it’s one of the least labor intensive testing methods. Secondly, the newest system’s counting range is up to 2,419 colony forming units (cfu) per sample, which is over 100 times greater than the original 10-tube MPN approach and more than 30 times greater than membrane filtration’s counting range. This can reduce or even eliminate the need for making dilutions. Lastly, the system’s 95 percent confidence limits are comparable to membrane filtration’s, even though there’s no need to count each colony.

Fountain Valley Lab, a commercial lab in Westminster, Md., switched from the MPN lauryl tryptose broth method to multiple tube and then a few years ago to the semi-automated bacteria quantification test system.

“Our old method was very time consuming, taking up to 72 hours for one positive,” said Chuck Mooshian, laboratory director at Fountain Valley Lab. “Then when we switched to reagent in tubes it cut down our time, but it was still a pain, especially autoclaving tubes. Once we switched to this system, we realized it just couldn’t be beat. Everything was easier and faster, and technician time was cut tremendously, allowing them to focus on other things. Whether it’s chemistry or micro, there is a premium for expedited sample turnaround.”

A less expensive option
Because traditional methods use a great deal of equipment, the fixed cost investment can be very significant. Since the demand for microbiological testing typically follows a seasonal pattern, laboratories using traditional methods run the risk of not having the capacity to handle peaks in demand and/or having idle equipment and people during the slow season. Though new rapid methods often have a higher per test material cost, they require very little equipment (in some cases up to 75 percent less) and fewer dedicated specialists. This means that when demand is high, it can be met, and when demand is low, technicians can be used for other work.

“When we switched to the system our hands-on time dropped by more than half,” Mooshian said. “It saved in preparing media and pipetting samples in individual tubes; you just press a button and you’re done. Being a small laboratory, we really have to cater to our customers. We try to pick up and run the sample the day they call. That, in conjunction with the quick results provided by the packs and media, keeps our customers happy and business coming through the door.”

Another important advantage that the technology offers laboratories is flexibility in both time-to-results and in organisms detected. There are three products that test for total coliforms and E.coli simultaneously: 1) one reagent for 24 hour results, 2) one reagent for 18 hour results, and 3) another reagent for 24-to-48 hour results (lowered from 28-to-48 hours as of Jan. 3, 2000).1 An additional reagent detects enterococci in just 24 hours. The sealer works with all of these media to handle total coliforms, E.coli or enterococci.

With the purchase of the sealer, each customer receives free software, compatible with the Microsoft Windows operating systems, to record data. The sealer has a one-year limited warranty and after that a low annual maintenance fee. No quality control is required on the instrument. Laboratories can use the same incubator that they already have for traditional methods. Minimal training is required to operate the sealer, and it can be done with a training video. Because only a sealer, incubator and ultraviolet (UV) light are required, passing a state certifier audit is very straightforward with this system.

Conclusion
This system is one of the first automated microbiological methods to gain widespread acceptance in water laboratories today. However, automation is not at all new to laboratories that do chemical analysis. Technological advances have increased throughput, decreased costs and allowed laboratories around the world to provide better services to their customers. Successful laboratories have learned to use these technologies to maximize their efficiencies. For easy, rapid, accurate and economical test results this system is the best tool for competing with today’s successful environmental laboratories.

About the author
Andy Meyer has been environmental product manager for IDEXX Laboratories Inc., in Westbrook, Maine, since 1993. He holds an bachelor’s degree in chemistry from Bowdoin UniversityCollege. The system described in the article above is the Quanti-TrayÒ System. IDEXX can be contacted at (800) 321-0207, (207) 856-0613, email: andy-meyer@idexx.com.